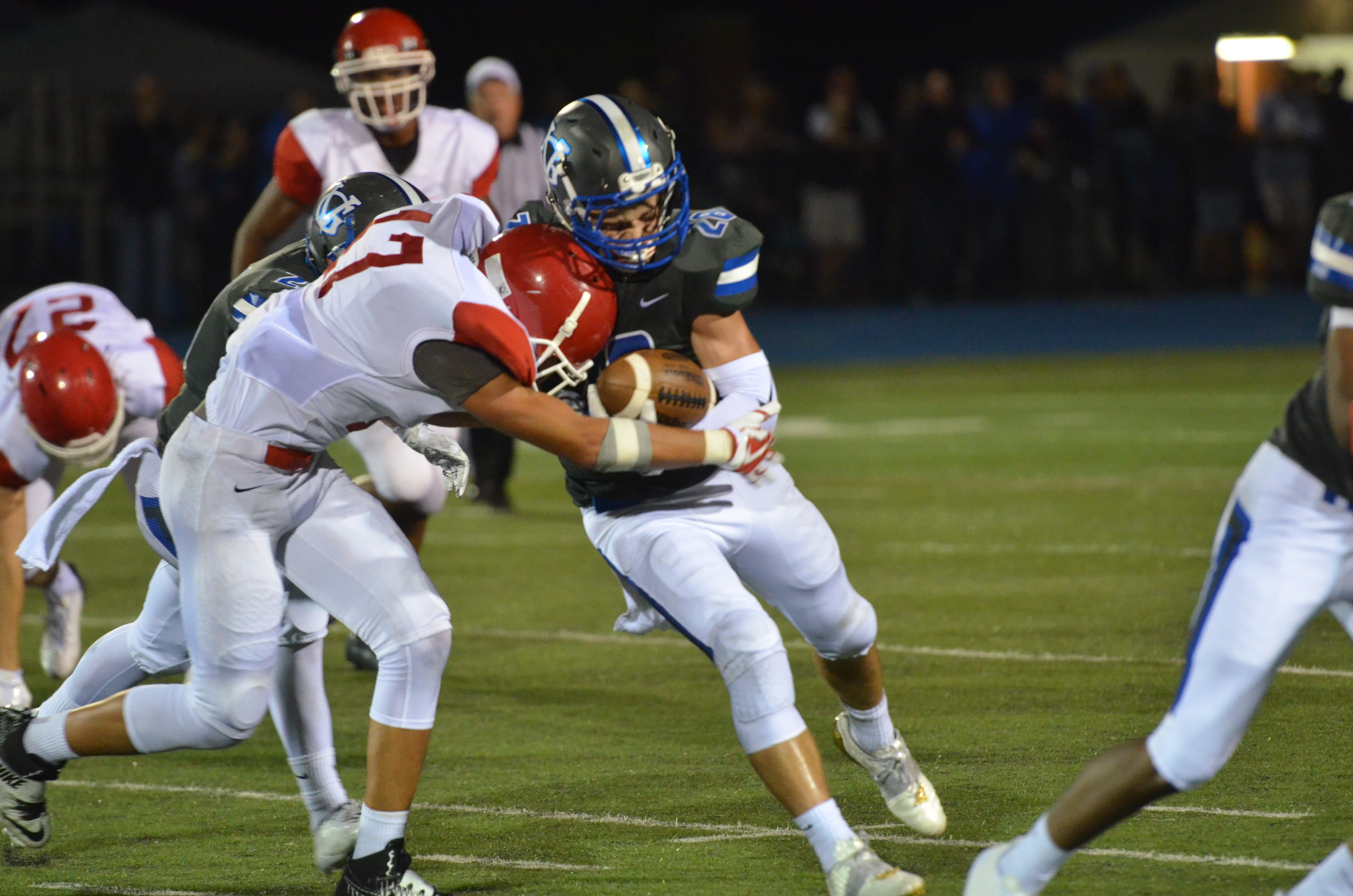 EAST WHITELAND >> One wouldn’t envy the near impossible decision it would be for Owen J. Roberts head coach Rich Kolka to give out a game ball after Friday night’s victory.

There will be no decision for Kolka, who witnessed one of the more dominating displays of defense during his tenure that resulted in a 20-8 victory over Great Valley. He can’t, and won’t, single anyone out — it’s impossible.

“I can’t single anyone out,” the third-year head coach said. “You had (Devan) Banos with sacks, (Aidan) Hayward with sacks, (Jake) Puderbach with sacks. The defensive line controlled the run game, the linebackers filled our runs and the secondary had two interceptions. It was a complete effort.”

A complete effort and also a complete 180-degree turn from last year’s disappointment in Week 2 where the Wildcats allowed 35 points in the second quarter in what turned out to be a 42-26 loss on their home turf. Preaching physicality during the week’s practice, OJR’s defense pitched the shutout, allowing only 173 total yards (102 before game’s last drive with under two minutes remaining), while registering six sacks and two interceptions. The win marks the first time the Wildcats have started 2-0 since the 2009 season.

“Their front line was humongous and they’re good physical players,” senior quarterback and linebacker Dawson Stuart said. “Our goal was to be more physical and our defensive line was faster. We pressured the quarterback, didn’t let him have anywhere to go. Our D-line stepped up big time.”

“There is a lot of experience,” Kolka said of the defense. “They play well together, practice well, and they have a lot of leadership on there. They’re a tough group.” It was a crash back down to earth for the Patriots, which piled up more than 500 yards of total offense in last week’s win against Phoenixville. Great Valley quarterbacks Jake Prevost and Damien Carter might be having nightmares of the interior presence of Banos, Puderbach and Hayward as they were left with little time to throw, were forced out of the pocket on nearly every pass attempt and were unable to generate any momentum offensively. Their run game didn’t fare much better against linebackers such as Stuart and Brendan Krumenacker, only finishing with 55 yards ­— 47 from Carter on 24 carries.

Four of the Patriots’ drives ended in three-and-outs. Another three ended in turnovers. All-in-all, not the performance head coach Dan Ellis is accustomed to.

“Our defense played pretty well,” Ellis said. “Mentally, I don’t think we ever played a game like that before. We didn’t catch, we didn’t block, we didn’t throw to the right guy. It was one of things that we didn’t execute at all. That’s my fault; we have to be better prepared.” Yet, despite all of the roadblocks, the Patriots held the lead entering the half after Mark Montague scooped up a fumbled pitch and raced 76 yards for the score midway through the second quarter.

Their momentum was shortlived. OJR came out hot in the second half, scoring touchdowns on their first two drives. Stuart and Hunter Hinrichs were the key reason behind both of them, Stuart finding Hinrichs open in the middle for a 19-yard touchdown to make it 8-7 before finding him again on the next drive on a post route to the middle of the field. Hinrichs won his one-on-one matchup with the defender, gained position and hauled down a 38-yard score to make it 13-8 midway through the third.

Hinrichs finished the game with five receptions for 116 yards and two scores. Stuart finished 11-of-24 for 172 yards and three scores, two through the air and one on the ground, a 1-yard sneak capping the scoring.

“We have athletes all over,” Stuart said. “Last week it was Sean (Praweckyj), this week it was Hunter. We felt that if we got the ball into our playmakers’ hands that they would do something special. Hunter had a great game and he did a lot of special things.”