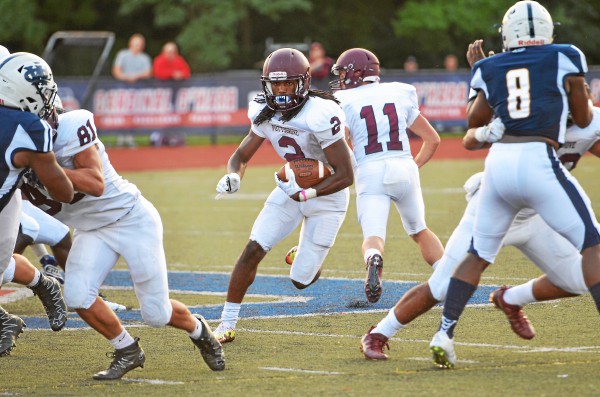 SPRINGFIELD >> Pottsgrove cornerback Dez Austin had gathered his teammates around him before the opening kick and imparted four simple words.

Led by a dominating effort from the Falcons’ front seven, Pottsgrove limited West Catholic to just 168 yards of total offense en route to a 14-0 victory over the Burrs Saturday night at Cardinal O’Hara High School.

“We just kept listening to what our coaches were telling us to do and listen to our gameplan,” defensive end Ryan Bodolus said. “It ended up working out and succeeding. “We came out hitting hard, and we weren’t intimidated.”

Bodolus spent the majority of his night in the backfield flushing the ever-dangerous Da’vion Kidd-Jackson out of the pocket on nearly every pass play. He, along with the play of Ephraim Hurt-Ramsey, Hunter Smith, Michael Dickey and Parris Janusek in the interior, limited the Burrs to just 92 yards on the ground, 27 coming on a Kidd-Jackson keeper.

Isaiah Glover and Nehemiah Collins stood out at linebacker with Austin, Bailey Delp, Kobey Baldwin and Jimai Springfield stepping up in the secondary.

Delp had an interception that thwarted a six-play, 63-yard drive in the second quarter. Springfield then capped off the dominating defensive effort with a pick on the last play of a game, a desperate ‘Hail Mary’ down the middle of the field.

Kidd-Jackson finished 6-of-24 for 76 yards — a 59-yard connection with Seth Degree the highlight of the night. That was it, however. Thirteen penalties for 109 yards did the Burrs in as they couldn’t overcome a 14-0 deficit entering the half, despite forcing five Falcon punts and limiting every Falcon player not named Rahsul Faison to 32 yards of total offense. Faison, committed to Stony Brook, finished with 141 yards on 26 carries, his 36-yard touchdown run displaying his Division I talent as he broke through four would-be tacklers before keeping his balance and finding paydirt. His touchdown capped off the scoring, coming three minutes after Jay Sisko found Austin for a 23-yard touchdown pass down the middle of the field.

He worked for his yards, though, as the Burrs loaded the box consistently throughout the night.

“They sent a lot of people at me,” Faison said. “Our line had a tough time picking up the blitz at first but in the second quarter we got on top of that. They then started some backside pressure and we made some adjustments at the half but they just starting sending more and more people in.” And for Faison, who missed last year’s opening contest against West Catholic, there’s still plenty of work to be done as Week 2’s date with Methacton approaches.

“We just need to keep working and getting better each week,” Faison said. “This win was good but we’ll be back at it on Monday.”