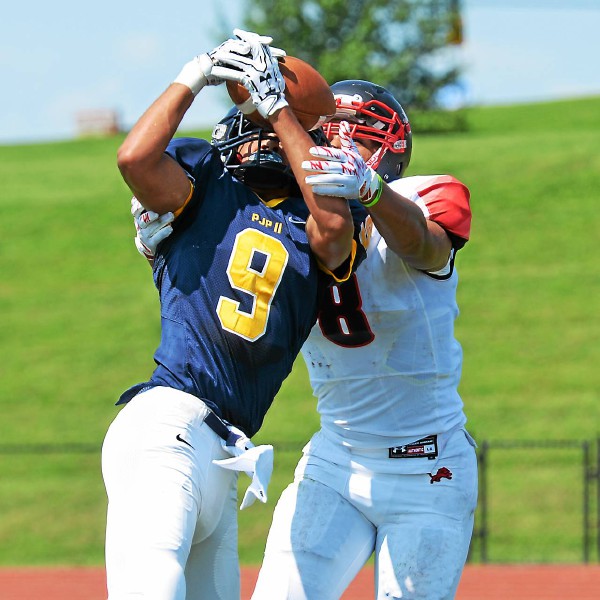 Saturday afternoon, Pope John Paul II set the foundation for what it hopes will be a productive 2017 season. The Golden Panthers stuck a 43-7 loss to Penncrest, posting their first season-opening win since 2011. Penncrest’s Chris Mills has his helmet knocked off as he tries to gain more yardage during the first quarter. (Sam Stewart – Digital First Media)

They did it in very solid fashion, too. A pinpoint-accurate passing game meshed with a pass defense that picked off Lion quarterback Chris Mills four times — returning two of the interceptions for touchdowns — fueled a run of 43 unanswered points after Penncrest drove the opening kickoff down for a touchdown.

A good feeling, it was. At the same time, PJP head coach Rory Graver sees it as an area on which to focus heading into next weekend’s game with Sun Valley.

“The biggest thing is to not be satisfied,” he said. “Sun Valley has a good team. We have to have a great week of practice, and we have to keep going.” Pope John Paul II’s Dan Cirino hauls in a pass during the first half of the Golden Panthers’ victory over Penncrest on Saturday. (Sam Stewart – Digital First Media)

Getting the roll going fell to Matt DeLaurentis, and PJP’s senior quarterback didn’t disappoint. DeLaurentis answered Penncrest’s opening drive by finishing off the team’s second possession with a 13-yard sprint around his left end at the 9:01 mark of the second quarter — that after completing a 32-yard pass to Dan Cirino along the way.

DeLaurentis would add another TD run of 14 yards before the end of the first half. He also highlighted his passing day by hooking up with sophomore Justin Mitala on a 33-yard toss that upped the Panthers’ lead to 30-7 10 minutes into the third quarter.

“From the jump, we came out slow,” DeLaurentis said, “but then we started executing well.” The PJP defense administered its first back-breaker at the 7:20 mark in the second quarter, when A.J. Natale swiped a Mills pass at the Penncrest 18 and ran it in for a pick six. That 12-7 lead ballooned to 18-7 by the half with DeLaurentis’ second rushing TD.

The capper came with 7:32 left in the game, Cirino swiping Mills’ final pass attempt and going 41 yards for the Panthers’ final score. In-between, Rick Bearden and Mitala had other interceptions — Mitala’s setting up a fifth touchdown when Natale bulled his way up the middle four yards inside the two-minute mark of the third quarter. Pope John Paul II’s AJ Natale races down the field after intercepting a pass in the second half. Natale returned the pick for six. (Sam Stewart – Digital First Media)

“I’ve been here since the beginning,” Graver said of the four-interception game, “and I’ve never seen it happen.”

“When we picked off the passes and ran them back for touchdowns,” DeLaurentis said, “that caused a real momentum switch.”

Penncrest mustered only 11 yards through the air, getting 160 on the ground.

Caleb Mahalik got all 71 of his game-high stripes in the first half, 56 of them on the visitors’ lone scoring drive at the 6:36 mark. Mills had more success running the ball, adding another 46 on 11 totes.

PJP’s passing game, in turn, had six different players emerge as contributors at the receiving end. Cirino covered 72 yards on five catches, Mitala had another 40 on two tosses, Bildstein had a 20-yard reception and Bearden an 18-yarder. “They had holes in their defense,” DeLaurentis noted, “and there were certain coverages we were able to exploit.

The Panthers’ running game saw Bildstein ride a second-half surge to a team-high 56 yards on 11 carries. DeLaurentis had another 30 on 12 tries, and Natale 17 on five.

DeLaurentis’ TD run ended up being his longest of the day.

“When I got into the backfield,” he recalled, “I realized their cornerback and safety had their backs turned. That was big.”

It all gave Graver a hard decision on which aspect of PJP’s play was biggest.

“Both,” he said. “The turnovers were huge. Our defense was great today, other than the first series. Our offensive line stuck with it … it struggled in the first half but then was in great shape.”

There was no such debate on the Golden Panthers’ readiness for its season opener.

“I knew we were ready,” Graver said. “The guys worked hard in the offseason. They’re hungry.”

NOTES >> Prior to the game, a moment of silence was observed to honor the memory of Gregory Weckel, a longtime educator and coach within the Archdiocese of Philadelphia. Weckel spent more than 46 years at various schools in the archdiocese, St. Pius X and Pope John Paul II among them. … PJP was the recipient of good field position on its seven possessions, twice starting inside Penncrest’s 35-yard line and two more times from at least its 40.