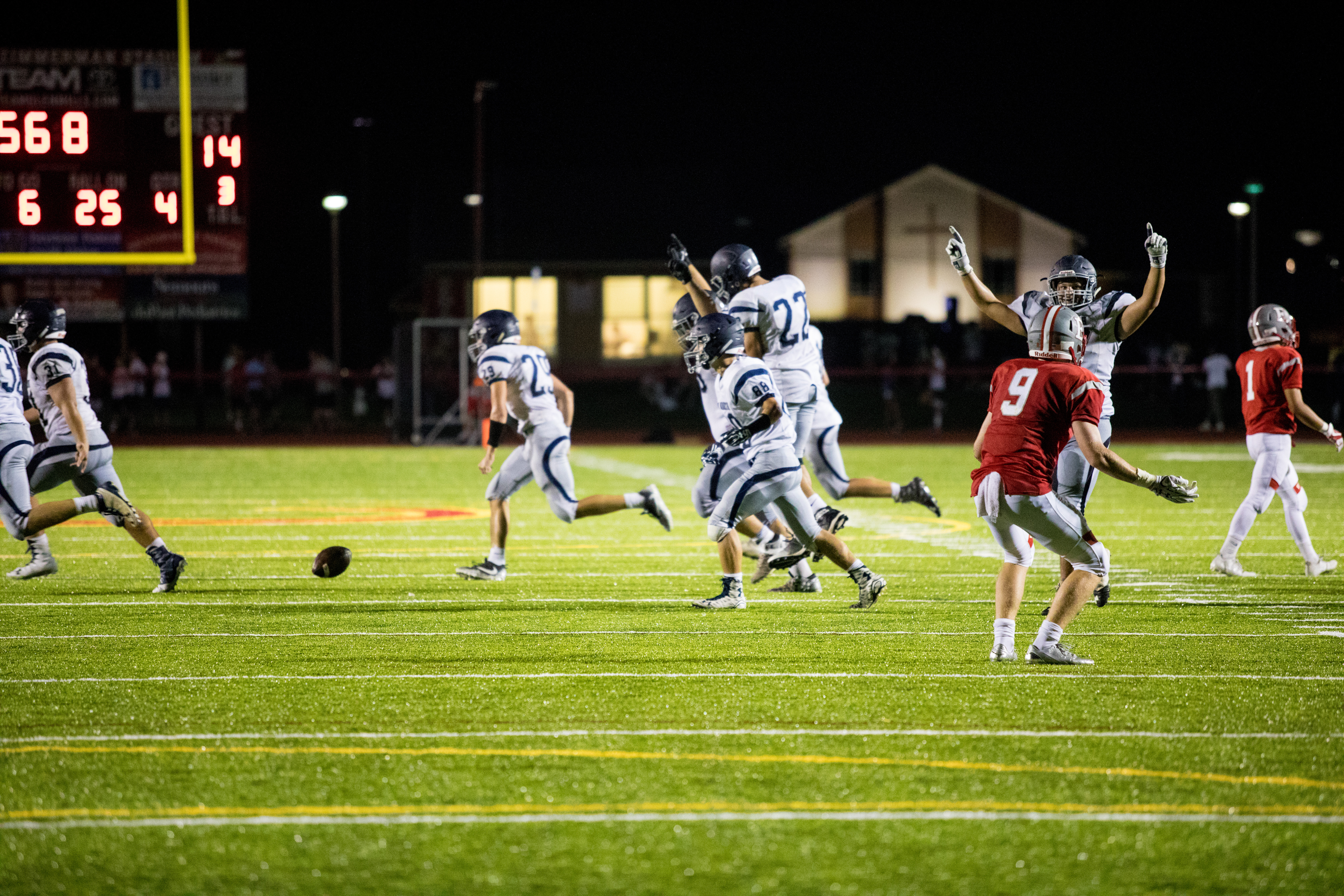 WEST GOSHEN — Given the choice, rookie mistakes are easier to swallow during a win.

West Chester East was oh so close to starting off the Scott Stephen era with a victory, but in the end, too many blunders proved costly.

Council Rock North scored the final two touchdowns and snuck out of Harold I. Zimmerman Stadium with a 14-13 win in the non-league season opener at East.

The Vikings were 0-2 in the red zone and had a shot to steal the game at the end, but a sack and strip by North’s Colman Closser and recovery by Alec Leyferman at the Indians 31 sealed the game.

“In the first half our offense has to put the ball in the end zone,” Stephen said, after his first game at the helm of East. “We had some opportunities. Our defense played great and gave us some help with some short fields. I didn’t do us any help getting three delay of game calls, but overall, we had too many missed opportunities.

The Vikings average starting field position in the first half on its five drives was midfield. They didn’t allow a North first down until five minutes left in the second quarter, forcing four three-and-outs and an interception. But a young East offense, revolving around star senior running back Jared Cooper, couldn’t take advantage. On their opening drive, the Vikes got to the North six, before a delay of game on fourth-and-four pushed them back five yards and a 30-yard field goal sailed wide left.

Following an interception by Joe Fogliano, East finally found pay dirt when Cooper took a screen pass from Ryan Cassidy and tiptoed down the North sideline for a 34-yard touchdown. The extra point went wide, keeping the score at 6-0.

“I think you saw how dynamic a player Jared is,” Stephen said.

After a quick three-and-out, North punted to Cooper, who found a seam on the right flank and took it to the house for a 60-yard punt return touchdown to push the lead to 13. While Cooper’s explosiveness made up for an otherwise stagnant offense, but he was bent backwards on the second play of the third quarter and spent the rest of the game with ice on his right ankle.

The Indians, who totaled just 84 yards of offense in the first half, were able to put together a 14-play, 65-yard drive before the break, capped by a 4-yard run by Michael Welde, to cut the lead to six.

With Cooper out, the Vikes tried to hold on, but North’s size began to wear on them. “(Cooper) is a game-changer,” North coach Matt McHugh said. “It’s very unfortunate that they lost a

special player like him, but it helped us readjust and game plan for certain things and we could just sit back against the pass knowing he wasn’t in the backfield.”

The pressure shifted from North’s defense to East’s and Welde ran for 69 of his 103 yards in the second half, following Johnny Vanderslice and Mark Amastasi off the right side for bigger and bigger gains.

“We tried to run the ball efficiently in the first half but we killed ourselves with penalties,” McHugh said. “At halftime we realized we were much bigger up front and focused on maintaining drives and keeping them off the field.”

On the fourth play of the fourth quarter, Robert Ranelli plowed in for a two-yard score and the extra point gave North its first lead.

The Indians were 0-5 passing the ball in the second half, with an interception by East’s Peter Faix, but were able to control the trenches when it mattered most. North went 1-8 last season in the first season under McHugh, who was a star quarterback for Garnet Valley in the mid-2000’s.

“It means a lot,” McHugh said. “We fought for this win. Being down 13-0, to battle back, it tells you a lot about this football team. Our mantra is ‘rise as one’ and we did that.”