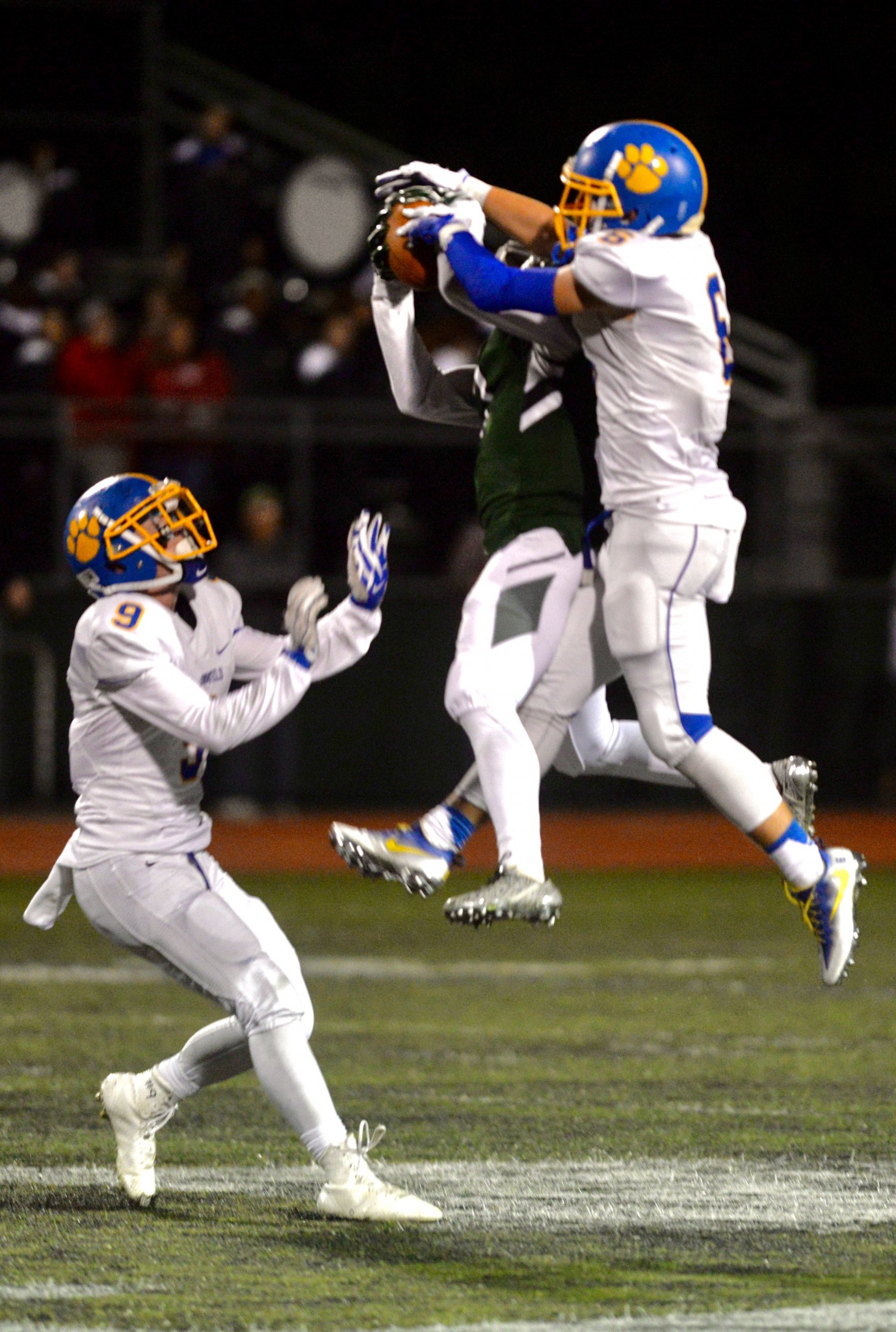 RIDLEY TWP. >> Nick Layden looked down at his phone a few hours before Friday night’s game. As the phone vibrated, signaling an incoming text message, the Ridley quarterback said he picked it up and gave it a glance.

It was a message from Scott Green, the team’s offensive coordinator.

“He texted me and said that was the first play,” Layden said, “and I knew it was going to the house.”

Layden’s first start as Ridley’s first-string quarterback ended with a 38-20 victory over Father Judge. His first pass of the game — the play that Green had called earlier in the day via text message — set the stage for a game in which the Green Raiders dominated.

From the Ridley 25-yard line, Layden settled under center, took the snap, then dropped back a few steps to deliver a crisp 25-yard pass to OC Miller. Father Judge’s safety tried to jump the route, and missed badly, leaving Miller to cover the final 50 yards untouched.

It was the first of Layden’s four touchdowns. He went 7-for-13 for 202 yards passing and three scores, and carried 17 times for 79 yards rushing and another touchdown. He accounted for 76 percent of Ridley’s offense.

“He’s real comfortable in the pocket. He does his thing,” Ridley linebacker Shane Dougherty said. “He’s been waiting for this a long time. He was humble and waited for his chance. I don’t think he lets anything that anybody says get to him.”

It took Layden and Ridley another eight minutes before they would regain the lead, on a 22-yard field goal from soccer player-turned-kicker Nate Warwick.

Layden incurred a few bumps in the first half, with the Green Raiders’ offense twice stalling out in the red zone. Dougherty and the defense bailed out Layden after one such drive. Dougherty jumped the line, stripped the ball from Father Judge quarterback Shane Dooley, and recovered it in the end zone for a touchdown. It was one of four first-half sacks for Dougherty.

“I just like to play my heart out. That’s basically it,” Dougherty said. “We have a good up-front box. We like to get the quarterback on the ends. We like to get after it.”

And they did in this game, despite what Dougherty called “negativity” from critics outside the program.

“Look,” Dougherty said, “everybody counts us out because we lost a lot of seniors. We don’t want to be in no Super 7s. We like to be the underdogs around here. It’s real fun.”

If Ridley (1-0) hopes to repeat its fortunes from a year ago, when the Raiders won 11 games and a share of the Central League title, they will need more outings like this one from Layden.

Even with that foreshadowing text from his offensive coordinator, Layden admitted he was stunned by how efficiently he played in Ridley’s opener.

“This went way better than I could have expected,” Layden said, grinning.

Great Valley’s Carter-Graeff connection too much for Phantoms
Off Their Shoulders: Upper Perkiomen downs Boyertown for first time since 2009