Off Their Shoulders: Upper Perkiomen downs Boyertown for first time since 2009 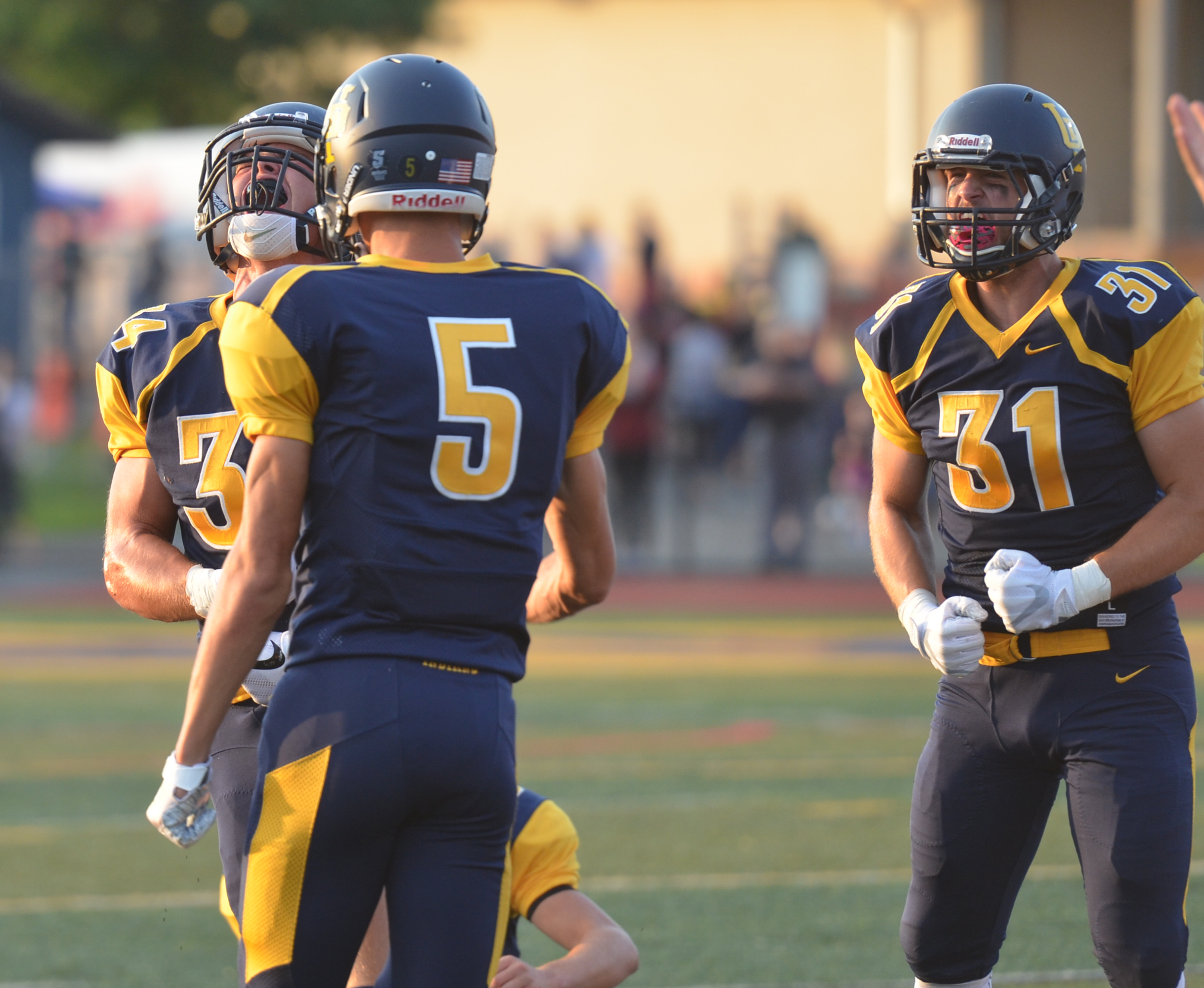 RED HILL >> After breaking two forgettable losing streaks in one night, Upper Perkiomen will need to find a new one to snap.

A new conquest wasn’t necessarily on the mind of Indians’ Ryan Kendra or Austin Tutolo, they were just elated to finally down the biggest thorn in Upper Perkiomen’s side for the past decade.

Kendra’s two interceptions coupled with the incendiary speed of Tyrese Reid in the backfield was enough for Upper Perkiomen to finally propel itself over bordering rival Boyertown, defeating the Bears 42-21 in the 60th clash between the two rivals. Upper Perkiomen’s Tyrese Reid shoves away a Boyertown would-be tackler during the first half of the Indians’ 42-21 victory over Boyertown. The win snapped a seven-game losing streak to their bordering rival. (Sam Stewart – Digital First Media)

The win snaps two long losing streaks for Upper Perkiomen. It marked the first victory over Boyertown since Thanksgiving Day of 2009 (24-17) and the first opening-week victory since 2010, a thrilling 49-35 victory over Muhlenberg. Seeing the Boyertown streak end, however, was the only matter of concern for an Indians’ squad that dedicates offseason programs and training camps to downing their neighboring foe.

“We were so pumped up for this game,” Kendra said. “I remember when this game would be 50 days away, we were counting down. Finally, it was here and we did our jobs and got the win.”

“It was a hell of a job by the whole team,” said senior running back Tutolo. “Every single person did their job tonight. Coach (Hontz) said there wasn’t one single star. We all played our part, people stepped in when needed. It was great.”

A collection of stars characterizes it adequately.

Senior wide receiver turned-quarterback Tyler Keyser shined in his first game under center since eighth grade, throwing for 122 yards on a 10-for-14 effort with three touchdowns. He connected with fellow senior Kendra in the back of the end zone for a 7-yard strike to kick off the scoring four minutes into the game before finding do-it-all back Tyler Whary for a 35-yard score minutes later to make it 14-0. His connection with Trevor Stephen on a 1-yard dump on fourth and goal put the capper on a top-to-bottom effort from the boys in blue and gold. Upper Perkiomen’s Austin Tutolo raises his arms toward the referee, hoping for a touchdown signal after his one-yard plunge. The referee obliged, prompting a celebration from the running back. (Sam Stewart – Digital First Media)

“The connection is still there,” Kendra said of his on-the-field relationship with Keyser. “He’s a hell of an athlete. He can run, he has a big arm. He hasn’t missed a step since eighth grade.”

Kendra’s day wasn’t just highlighted by a touchdown in the first quarter. A cornerback on defense, Kendra came up with two critical interceptions, the first deflating Boyertown’s comeback hopes as he stepped in front of a pass from fellow coworker Ayden Mathias intended for basketball teammate Jerry Kapp and raced 65 yards the other way for the pick-six to make it 35-13 late in the third.

“I know both of those guys, so I didn’t want them to show me up,” Kendra said. “I played my role, did what I could to pick it off.” Boyertown’s loss was a sour ending for the debut of new head coach TJ Miller. The Bears kept the game within reach throughout the majority, trailing 21-13 at the end of the half following a Kapp 22-yard touchdown pass to Kevin O’Connor. However, Kendra’s pick-six put the Bears in a hole they couldn’t dig themselves out of. Mathias connected with O’Connor again for a 17-yard strike to make it 35-21 early in the opening minutes of the fourth but an interception by Kendra on a Mathias pass intended for Kapp in the corner of the end zone ended a valiant comeback attempt.

Mathias finished with 112 passing yards and two scores. Running back Marcus Thomas led the way on the ground with 128 yards on 24 carries with O’Connor finishing with 115 yards receiving and three touchdowns on four receptions. Both Thomas and O’Connor left the field with some takeaways for next week.

“We didn’t come out as physical as we wanted to at the beginning of the game,” O’Connor said. “We have to be ready and energized for kickoff.”

“I think it was a good learning experience,” Thomas said. “We were shown that it’s not going to be easy and we’re going to have to work super hard to beat teams. At least we set that standard of what we need to do now.

After missing last year’s game after being on vacation, Upper Perkiomen’s Reid had a major impact in Friday night’s game rushing for 119 yards on nine attempts. His 49-yard run in the second quarter set up Tutolo from 2-yards out to make it 21-7.

“They weren’t ready for him (Reid),” Tutolo said. “He stepped up and made a nice impact for the team. Good job, buddy.”

“I had to make a comeback,” Reid added. “I was doing track all summer.”

NOTES >> Upper Perkiomen out-gained the Bears 343-297. Upper Perkiomen didn’t punt, each drive ending in a touchdown or interception. UP kicker Ryan Casola made all six extra points. … Whary finsihed with 43 yards on 10 carries and added 45 yards receiving on two receptions. … Tutolo finished with two touchdowns and 51 yards on nine carries.