Great Valley’s Carter-Graeff connection too much for Phantoms 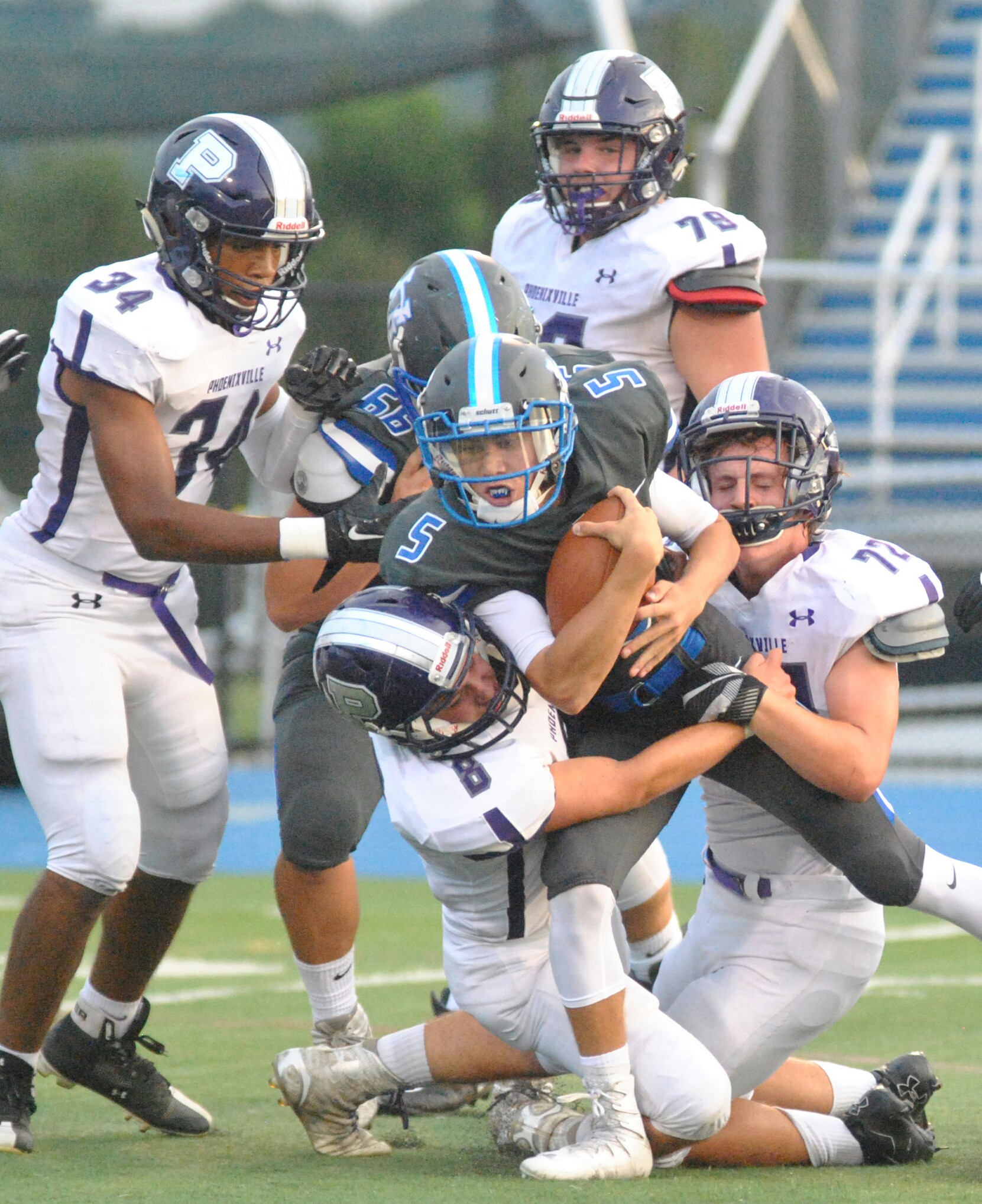 Phoenixville led at the half, 18-16, but the Patriots were able to ride the duo of Damien Carter and Nate Graeff to their first victory of the 2017 season.

But the story of the game was the Carter-Graeff connection.

“We’ve been best friends since seventh grade,” Graeff, a tight end, said. “We have great chemistry and he knows he always has me to throw to.”

Despite playing with a gimpy ankle, Graeff finished the day with eight catches for 168 yards and three receiving touchdowns.

Graeff first found the end zone late in the first half with the Patriots trailing by nine points. But Carter hit Graeff streaking down the sideline for a 38-yard score.

After Phoenixville and Great Valley traded touchdowns, the Patriots again found themselves behind, but a 37-yard touchdown from Graeff put Great Valley ahead for good.

Carter finished the day with 124 yards on the ground in addition to his 163 passing yards and Great Valley head coach Dan Ellis took notice.

“We’re really lucky because Carter and Jake Prevost are both great quarterbacks on our roster,” Ellis explained. “Jake had been working really hard and I thought he deserved an opportunity to play, but when Damien is running like he was tonight, it’s hard to take him out of the game.”

The Phantoms offensive attack was led by Patania who finished the day with 210 yards of total offense and three total touchdowns, two of which came on quarterback sneaks at the goal line.

“This was his first real action as our starting quarterback and I was really impressed,” Phoenixville head coach Evan Breisblatt said. “I just think there are bigger and better things coming down the road for Connor.”

The Phantoms defense did well in the first half, holding Great Valley’s offense to just 16 points, but they wore out as the game wore on, allowing 34 points and almost 300 yards of offense in the second half.

“They wore us out and our captain got hurt, so that didn’t help,” Breisblatt explained. “But we missed tackles and they have about eight or 10 linemen who are really good and they’re a big team.”

Alex Crouse paced the Patriots on the ground, picking up 185 yards on just 15 carries, while also adding two touchdowns, including a 29-yard score that iced the game in the closing minutes when Phoenixville was trying to mount a comeback.

As for Phoenixville, Travis Panella was their go-to running back all game, finishing the day with 85 yards and one touchdown on a game-high 20 carries. The Phantoms finished with over 300 yards of offense and 31 points, but as Breisblatt points out, they need to tighten some things up on defense in order to win.

“At the end of the day, we need to shore up tackling,” the coach said. “That’s been our Achilles’ heel and that led to too many points being scored.”