Spring-Ford out to prove the doubters wrong 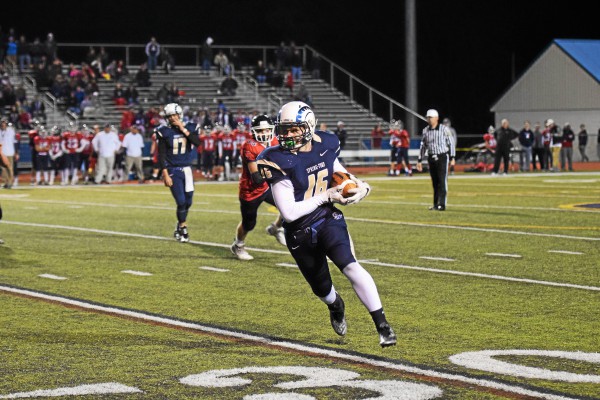 No chance for Spring-Ford? In the words of legendary College Gameday analyst Lee Corso: “Not so fast, my friend.”

No. 8 Spring-Ford heads into North Penn’s Crawford Stadium Friday night at 7 p.m. with upset on its mind as the Rams try to knock off an undefeated Knights squad that looks to make the district semifinal for the second straight season.

“I’m sure no one will pick us to win,” Spring-Ford head coach Chad Brubaker said. “When it comes to the District 1 playoffs and to some of our non-league games over the past four years (2012 – Whitehall, Garnet Valley, Ridley, Pennridge; 2013 – Downingtown West; 2015 – State College; 2016 – last week vs. CB East), we haven’t been the odds on favorite in the media’s eyes. But our staff and players go into games expecting to win. When our players see people predicting the game will be over by halftime, I think they take that personally. Each playoff game is a challenge and every week every team has to play four quarters of excellent football to advance.”

The Rams and Knights enter the quarterfinals after destructions of their first-round opponents; Spring-Ford a 38-7 winner over CB East, North Penn a 56-7 victor over Haverford. Rams senior running back Matt Gibson returns after missing last week’s game due to injury and will head a backfield that ran for 118 yards in last week’s win — Selwyn Simpson picking up 81 of those yards to go along with two scores. TJ Pergine, fresh off shattering the Rams’ single-season record for passing yards in a season (2,122), has come along in his first year starting. The junior quarterback has thrown for 150-plus yards in three of the past four wins.

“Matt is back,” Brubaker said. “He had a really frustrating past week on the sidelines. We’re excited to have him back. TJ’s learning curve has sharply ticked up throughout the season. He was extremely green through the first half of the season. However, as the season has progressed, he has demonstrated to the staff and team that he is more mentally prepared and focused throughout the practice week and on Friday nights. Our program is senior-oriented. This is not their first rodeo. We expect them to play well.”

North Penn (11-0) comes in Friday seeking its second straight trip to the district final. The passing game, once complementary to the Knights typical ground-and-pound offense, has become a major weapon for the team in 2016. Reece Udinski leads the Suburban One with 2,781 passing yards with 28 touchdowns compared to five interceptions. His major targets: Ricky Johns and Jake Hubler both have more than 700 yards receiving this season, Johns with 774 yards and Hubler right behind at 728.

Getting pressure up front will be critical for the Rams to compete.

“It’s not just on the secondary (to contain them),” Brubaker said. “We need to get pressure from our front four and get maximum effort. As the season has progressed, we have been able to rotate more players on the defensive line. Hopefully, that enables us to stay fresh and keep pressure coming throughout the game. Obviously, we will need to know where No. 8 (Johns) is lined up the whole game, but they have more than just one weapon on offense.”