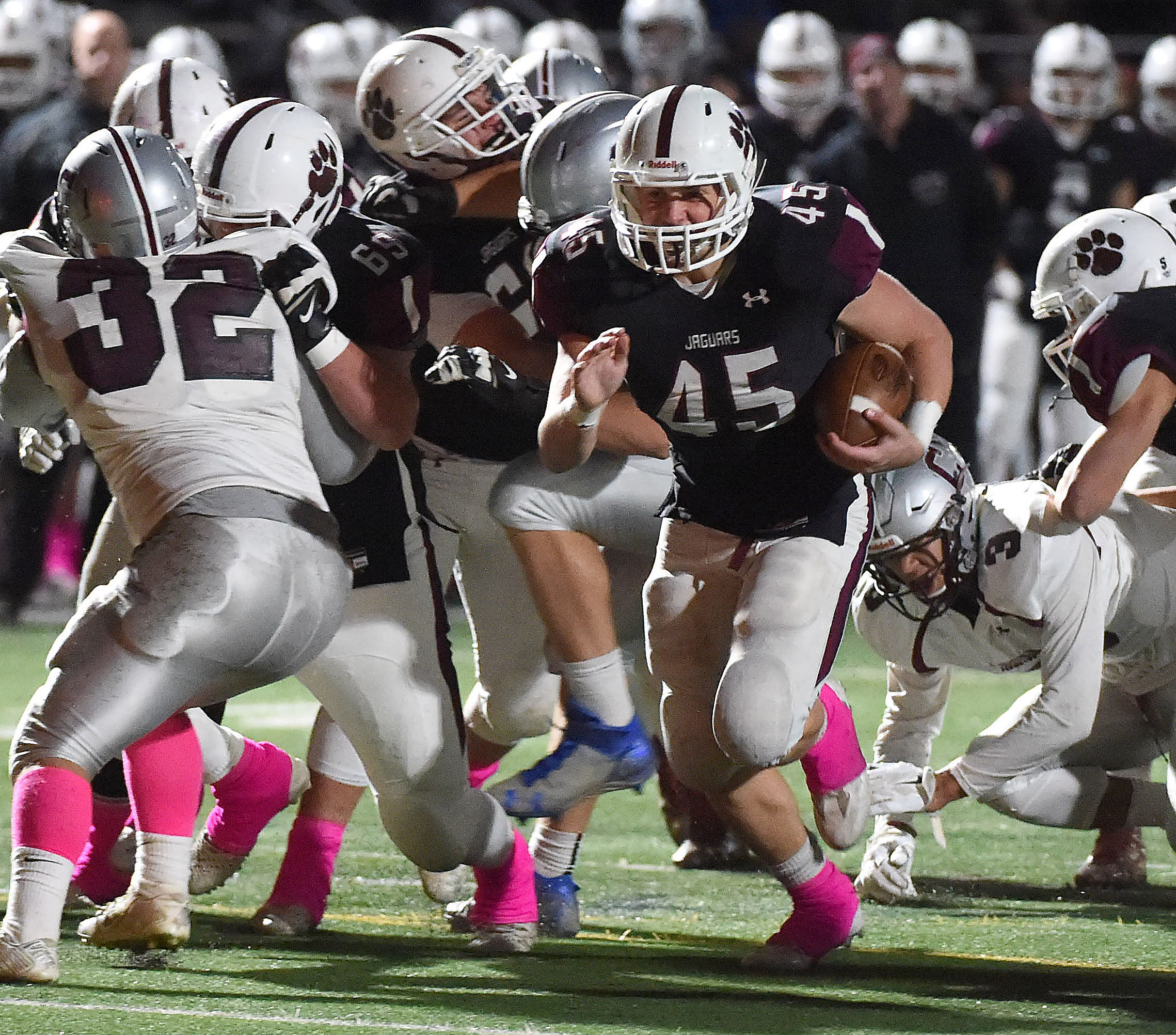 CONCORD >> After last week’s high intensity win over Springfield, it was a reasonable possibility that Garnet Valley would enter its game against Conestoga a little flat, maybe even primed for a bit of a letdown.

The Jaguars, however, endured no such lapse, storming to a 42-7 victory over the Pioneers. The victory was made possible by an impressive first-half effort by power backs Austin Patton and Matthew Lassik, along with an absolutely suffocating defensive effort.

“Those guys have been great for us all year,” Jaguars coach Mike Ricci said of the two running backs. “We have some guys banged up and we really didn’t miss a beat. Those guys stepped in and executed like we knew they were capable of. Our line did a great job of opening holes for them, and (quarterback Nick) Juliano did a good job making the reads. We really feel like we have a stable full of backs that can carry the ball for us when we need them to.”

Garnet Valley running back Matt Lassik, center, runs through Conestoga tackles for a big gain in the first half of a 42-7 win Friday. (Digital First Media/Pete Bannan)

While Patton and Lassik may not have enjoyed the acclaim of other Jags running backs thus far, they’ve been key contributors all season.

“We weren’t sure if (Jacob) Buttermore was going to play or not, so I got focused and was going to be ready to start,” said Patton, who rushed for 104 yards on 10 carries and scored two first-half touchdowns. “I could not have done it without the o-line. Without them, I wouldn’t be anything.”

Lassik was just as eager as Patton to get a little more action.

“We obviously missed the guys that we usually have in there, but when you have the depth that we have, and are able to run the ball like we did, it was great,” said Lassik, who had 91 yards on 11 carries and a scoring run. “Our coaches made it very clear to us that Conestoga had the talent to beat us and that we had to be very persistent and very good in practice to beat them. After Springfield, we feel like we have momentum as we head into the playoffs. Our seniors have been great leaders for us and we would like to do this for them.”

For good measure, Buttermore not only played, he added two scoring runs. That helped push Garnet Valley to a 35-0 lead at halftime, with an edge in total offense of 264 yards to 19, and a 14-1 advantage in first downs. With his touchdowns and six extra points as the Jags kicker tonight, Buttermore broke the school record for points in a season.

“Our defense has been getting better and better,” said Ricci, whose team improved to 8-2. “Last week against Springfield we gave up two touchdowns early and were stellar after that. Charlie Coslett has been spectacular at middle linebacker and our d-line has been terrific. Our front seven has been playing at a really high level and did so again tonight.”

Among the defensive highlights were interceptions by Sam Rudolph and Jason Rose; along with a combined five sacks from Joe Thomas, Joey DiAntonio, Rob Monachello, and Chad Hrivnak.

“We knew they passed the ball a lot, so during the week we were working a lot on our pass rush,” Thomas said. “We knew they liked to run that quad set, so we were looking for it, calling it out on the field, and we were ready for it.”

For the Pioneers, it was the end of a roller-coaster year, which started with great uncertainty after a tumultuous offseason due to an off-the-field incident and coaching changes. Eventually, though, Conestoga saw the building blocks for the future start to be set.

“This team had a heavy burden on it coming into the season, but they were tough, fought through adversity, and showed a lot of character and determination,” said Pioneers coach Marquis Weeks, whose team fell to 2-8. “Those are the things that we’re looking to build on with Conestoga football.”