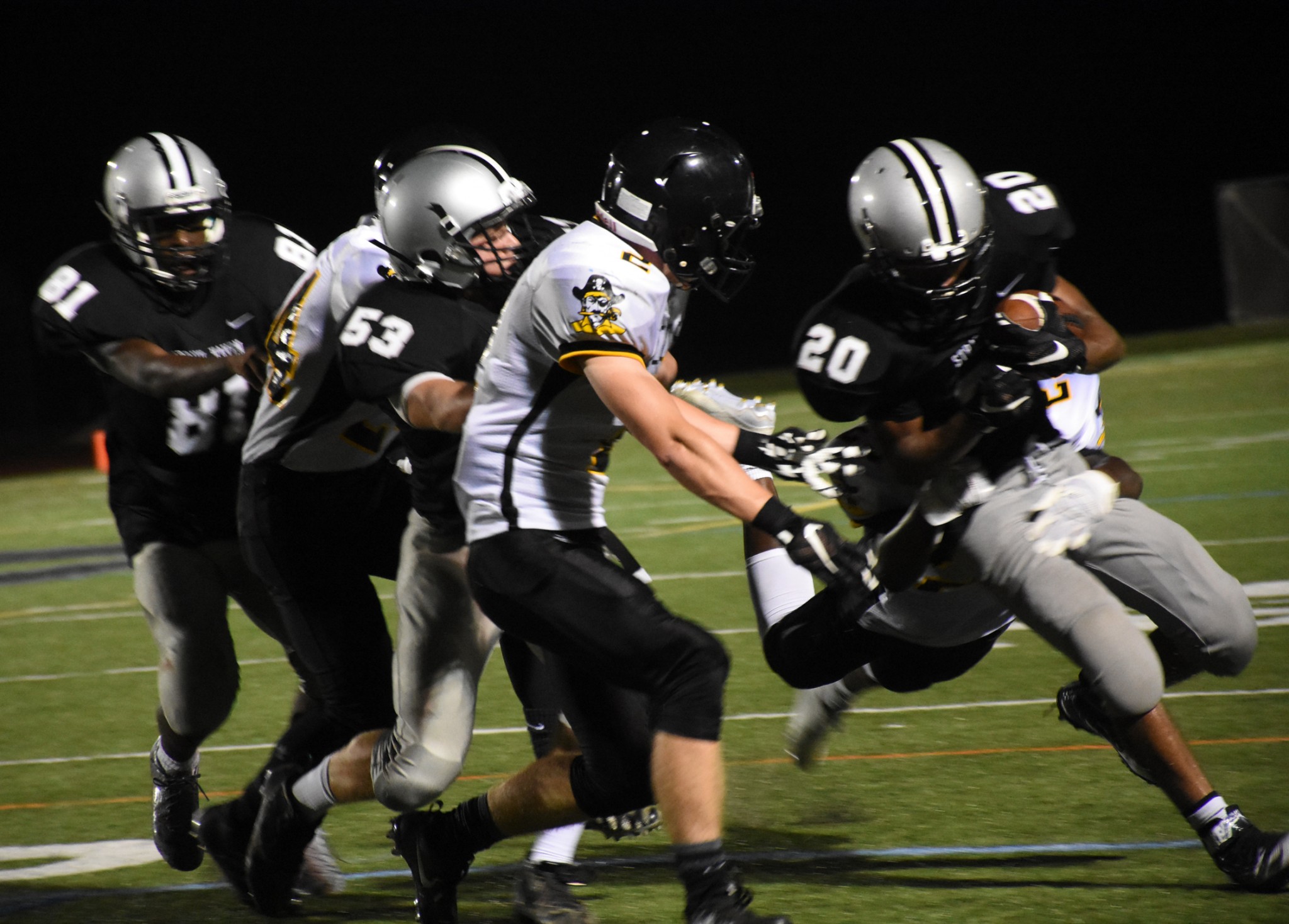 NETHER PROVIDENCE >> The decision facing Steve Lennox late in a draining, demanding football game should have been difficult Friday. Fortunately for the Interboro High coach, Chris Thomas already had made a suggestion … and a vow.

That was the senior running back’s promise just before he’d scored his fourth touchdown of the night with 1:34 left to draw the visiting Bucs within a point of Strath Haven.

Go for the two-point conversion … and ready the celebration.

“I have a very good kicker, so I was back and forth with it a little bit,” Lennox said. “But we had the momentum. And we had this Thomas kid.”

After completing a 233-yard rushing night with a four-yard touchdown burst, Thomas blasted behind the sturdy line for a two-point conversion to push the Bucs to a 36-35 victory in as close to a classic high school football game as there might be a week before Labor Day.

By then, senior kicker Chris Ravert had been 4-for-4 on PATs, showing all indication that 5-for-5 would have been likely. But Interboro had just scored twice within the final 5:47, enough of an added workload for one summer night. So Thomas spoke up, overtime was avoided, and the Bucs won the non-league opener.

“I think he was a little iffy at first,” said Bucs quarterback Nate Murtha, of Lennox’s decision. “He asked all of us. And we all said we wanted to go for it. We wanted to win the game.”

Murtha had hit Connor Adams with a 35-yard pass on the game-winning drive, which was born from an equally courageous yet not as successful decision by Strath Haven coach Kevin Clancy. Leading, 35-28, with 3:49 left, the Panthers hit a fourth-and-2 situation at the Interboro 36. Clancy elected not to punt. Interboro held, took possession and completed its rally.

“I had a chance to finish the game right there,” Clancy said. “The ball was at the 36. I thought it was the time to do it. Interboro is as tough as any team in this county. Tonight, we just didn’t finish. But I am proud of this team. We have to tighten up some things on defense. But we will build on this.”

As difficult defeats go, it did leave Strath Haven with a reasonable foundation for growth. The Panthers’ running game was consistent, with Van Bobo rushing for 125 yards and Zach Newlon adding 111 with three touchdowns, including a five-yard push with 9:44 showing. With freshman Emmet Young’s fifth PAT, that gave the Panthers a 35-21 lead.

But Interboro earned its late chances, then made them count with linemen Quinten Frangelli, Noah Nicholl, Mike MacMillen, Cam Brooks and Manny Obaseime, among others, creating space for a 341-yard running night.

“My kids don’t quit,” Lennox said. “Those are Interboro kids. Those are Bucs’ kids.”

Interboro staggered the Panthers with a touchdown on its first drive, a six-yard Thomas run. After a one-yard Newlon touchdown, Murtha answered with a one-yard quarterback sneak for a 14-7 Interboro lead. But Strath Haven scored twice in the second quarter, on a seven-yard Newlon run and a 27-yard pass from Evan Atsaves to Jay Smith, who made a leaping catch in the end zone. Atsaves’ seven-yard scoring strike to John Harrar put the Panthers ahead, 28-14, in the third.

“We had to get some butterflies out,” Thomas said. “And we did.”

That much Thomas showed with a 60-yard stomp through the middle for a touchdown one play after the Harrar score, an indication that the Bucs were not in a mood to leave early. Indeed, they waited until as late as possible, with Adams recording his second interception with 1:19 showing to blunt the final Strath Haven drive.

“They executed well,” Lennox said, praising the Strath Haven offense. “We got ‘wing-T’d’ tonight. Normally, our defense is very stout. But that was a great high school football game.

“I’m 38 years old,” he added, smiling, exaggerating only by a couple of decades. “And this is still a lot of fun.”