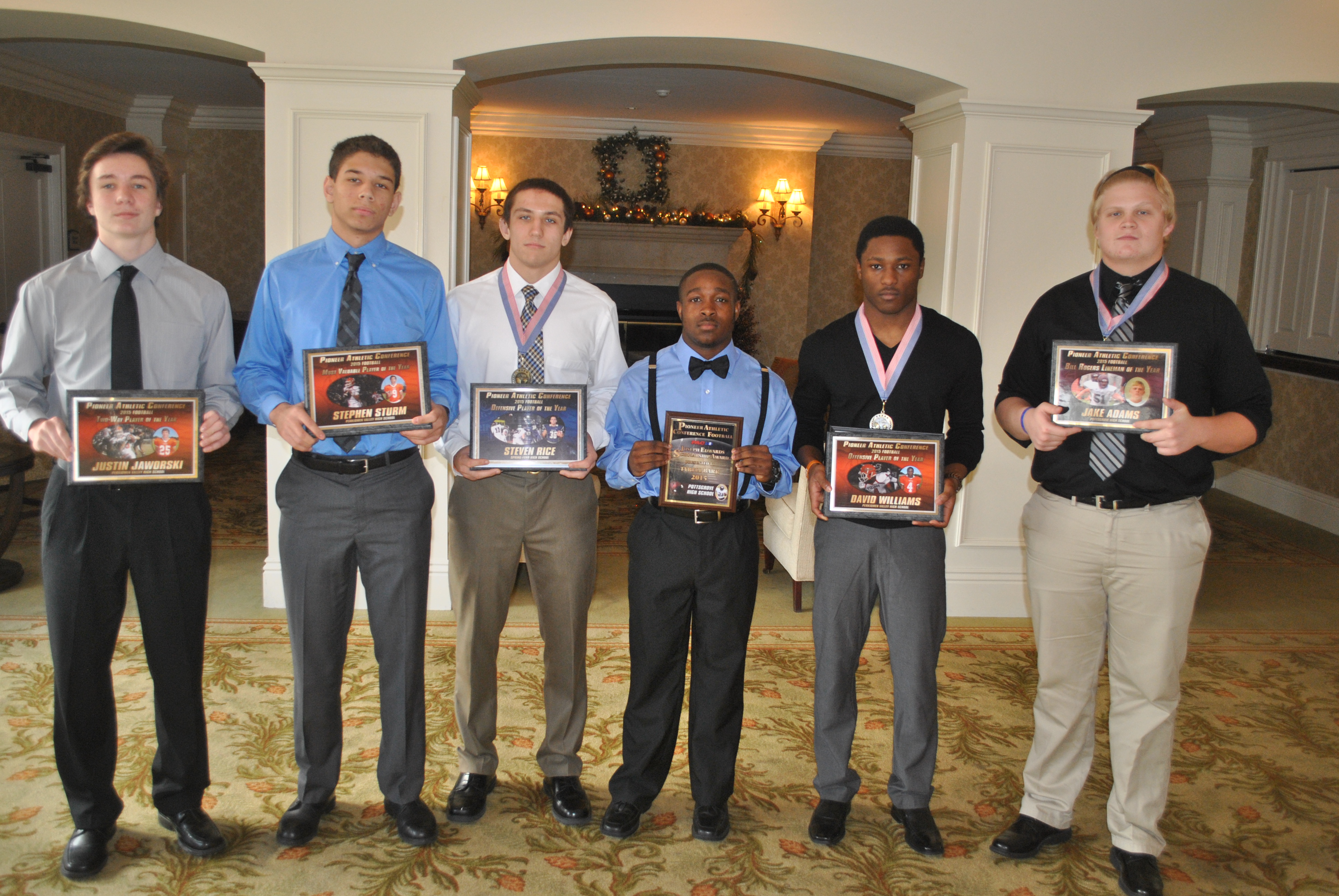 All awards were voted upon by the PAC-10 Football Coaches Association, which also selected first team, second team and honorable mention all-star recipients for both offense and defense.
DeFrancesco is undergoing chemotherapy for a 6-to-8-week period to deal with testicular cancer, which represents a testament in courage and fight to overcome adversity that no scholastic student-athlete should ever have to deal with. Pottsgrove head football coach Rick Pennypacker told the story of DeFrancesco’s career, both from an athletic standpoint as well as his battles with cancer that arrived at age 17 and other physical issues with his leg and ankle. Spring-Ford head football coach Chad Brubaker first explained the criteria for winning the David L. Freed Award, which is named in memory of former Spring-Ford lineman David Freed, who died from head injuries suffered in a 1975 practice incident on a machine that is no longer manufactured.

Despite numerous setbacks along the road, DeFrancesco has maintained a positive attitude and has continued his diligent work ethic as a star member of both the Falcons’ football and wrestling teams.

“I had no idea I was getting it (Freed Award),” said DeFrancesco. “Then they started talking about it. Coach (Pennypacker) started talking, and so I had a great feeling. Everybody started clapping for me and everything. It helps to have the will to fight, and still fight. You can never give up on your dreams. You have to do what you believe in and keep striving.”

DeFrancesco has spent an extraordinary amount of time in the weight room while preparing for rigors in two scholastic sports during his high school career – football and wrestling.

Because of the extensive media coverage the DeFrancesco case has received, and because he is such an admirable student-athlete on top of it all as a special person, DeFrancesco has been constantly receiving best wishes from students, players and other coaches he does not even know.

“They say they are praying for me,” said DeFrancesco, “especially with the coaches and kids I don’t even know. I am really appreciative.”

“He practiced every day and never stopped lifting,” said Pennypacker of DeFrancesco’s sports time despite the illness. “He bulked up. He asked ‘When can I play football?’ All he cared about was playing football.”

Following surgery, DeFrancesco still made it back on the football field two weeks later to compete with the rest of his Falcon teammates in the District 1-AAA playoffs, a testament to his fight then and now as his battle continues.

Barr became a primary focus of the Pottsgrove offense this season as a durable running back. Barr is originally from Phoenixville, where he first played football in the 60-year-old Phoenixville Marian Youth Club (PMYC) youth sports program. Tyrell’s father, Timothy Barr, played sports at Phoenixville and is still employed there at the Good Samaritan Shelter. Tyrell’s uncle, Harry Barr, still holds the Phantoms’ school record for the 100-yard dash, which is in the area of 9.8 seconds.

“I grew up in Phoenixville and played Little Brothers football in PMYC,” said Tyrell Barr. “My dad really helped me. I moved to Pottsgrove when I was in the middle of my seventh grade year. I was playing basketball at Pottstown at the time, and my mom decided to move to Pottsgrove. At first, I started crying, and I didn’t want to move for the third time. But then I didn’t mind it. I have had good guys around me here from eighth grade on up. Having that chemistry out on the field really helps.”

Barr has enjoyed being part of the traditional football success that Pennypacker’s teams have created at Pottsgrove throughout the entire program. But it has been more about learning life’s lessons from the game of football, like the values of hard work, dedication and teamwork and friendships, moreso than the wins and losses and individual statistics from any single game or season.

“I am coming out of an organization with a great tradition at Pottsgrove,” said Barr. “No other place has this kind of winning tradition like we have at Pottsgrove. We carry on the winning or losing. At the end of the season, you always walk away with something.”

His future plans include majoring in applied mathematics at either Princeton University or Temple University in the pursuit of becoming an actuary.

Perkiomen Valley head football coach Scott Reed bid farewell to the PAC-10 football fraternity after stepping down after 12 seasons to devote more time to his own kids and family. Reed guided the Vikings from 2004-15 and compiled an overall record of 82-53 while winning two PAC-10 championships. He also led PV to four District 1-AAAA playoff berths.

This past fall, the Vikings went neck-and-neck with Spring-Ford throughout the season before the Rams won the showdown contest between the two schools in the last week of the campaign as well as the league championship. PV did win one game in the district playoffs. Reed noted that he has been fortunate to have coached some outstanding athletes. He said he has also been blessed to have four assistant coaches who have been so loyal and faithful to him, as well as becoming great friends. The PV assistant coaches include Jason Basile, Matt Young, Tim Connolly and Rob Heist.

Reed will remain active as a basketball official during the winter months.

As coach of the league champions, Brubaker also gave a speech. He said the PAC’s reputation in football is enhanced by how teams perform during the playoffs. Brubaker congratulated PV on its district playoff victory. He also said the Rams are very excited about the league’s expansion next year, when Norristown and Upper Merion will be added to the loop. The 12 member schools will be divided into two divisions of six teams per side, based on larger and smaller school enrollments. Brubaker said the new schedule will allow teams to play some interesting, high quality non-league games.

Brubaker said football is a great game that has come under attack because of the number of concussions involved. But he also pointed out that a high number of safety precautions have been taken to prevent severe head injuries, including upgraded helmets. Game rules, he said, also allow for safety measures at a higher rate while dealing with the nature of football. Brubaker said an objective report would show that head injuries can be as serious in some other sports as they are in football.