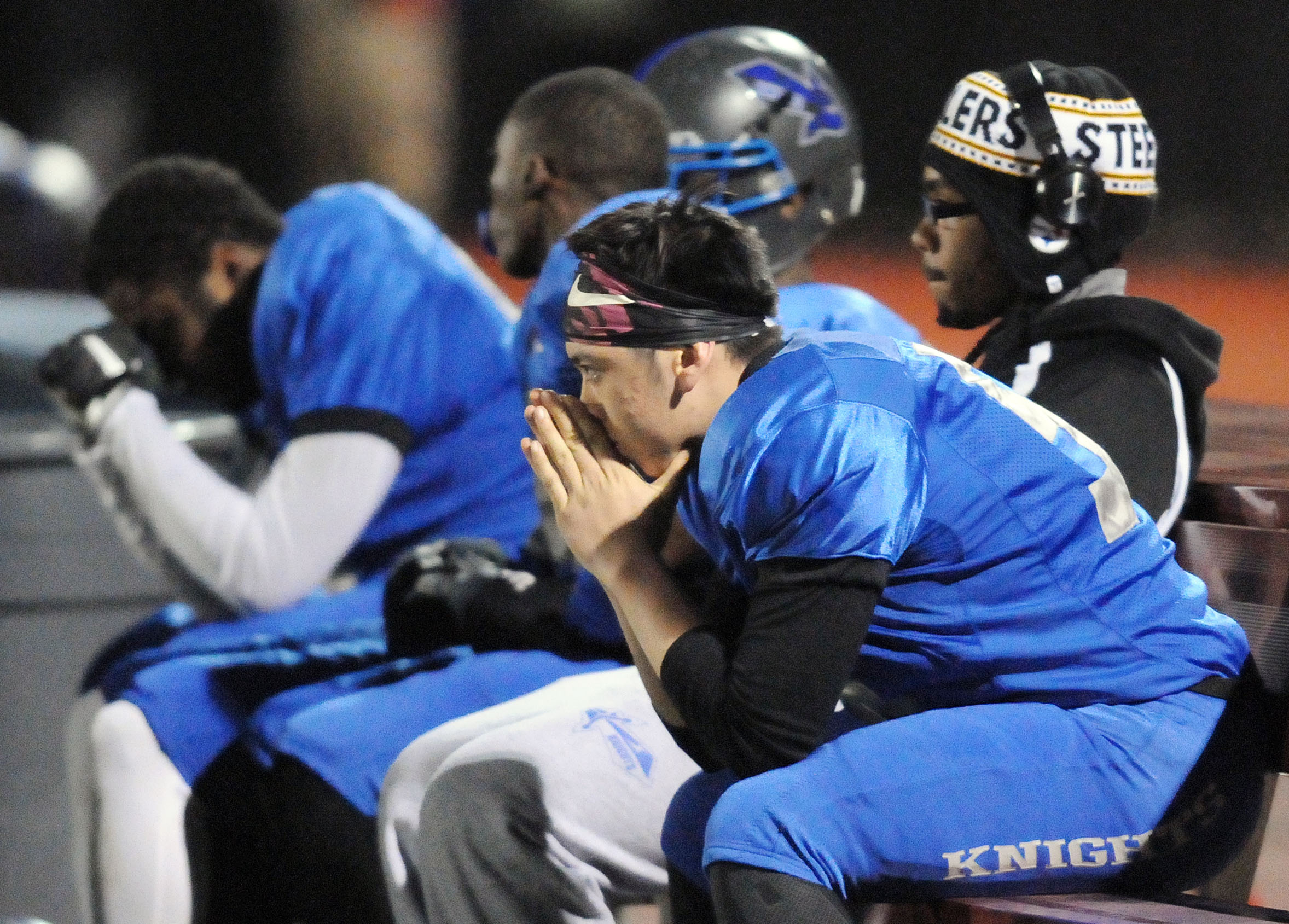 WHITEMARSH >> Academy Park junior Teddy Wright was all smiles after the Knights’ season-ending 46-16 defeat to Imhotep Charter in the quarterfinal round of the PIAA Class AAA playoffs.

“Man, I’m already amped up for next year,” said Wright, a playmaking defensive back who recorded six interceptions for the best defense in Delaware County. “Plenty to be excited about.”

Wright will be one of AP’s senior leaders next fall. Unfortunately for Wright and his boys, the 2015 season ended with a loss, a 46-16 thumping at the hands of the District 12 champion Panthers.

The Knights (13-1) accomplished their goals of winning Del Val League and District One titles. Sure, it would have been nice to win three more games and celebrate a state title, but Imhotep Charter is on another planet. The Panthers defeated two-time reigning state champions Archbishop Wood to get to Friday night for a date with Academy Park at Plymouth-Whitemarsh.

Academy Park’s Jermaine Wesley falls into the end zone for a touchdown before Imhotep Charter’s Amin Black, 16, and Isheem Young, 3, can bring him down for the Knights’ first touchdown in a 46-16 loss in the PIAA Class AAA quarterfinals Friday night. (Times Staff/Tom Kelly IV)

“Those guys are good,” Wright said.

The Knights put up a fight, and showed flashes of what made them such a special team this year, but on the other side of the field was a team that had punished opponents at will. Imhotep entered the contest having outscored teams, 564-72. The Knights would be their next victim.

“We say to our kids all the time that players make plays. I’m sure they say it to their kids, too,” AP coach Jason Vosheski said. “Their players made plays. They have some special players. Get the ball in their hands and they do special things.”

Academy Park, as odd as it may seem, had its chances. Several times in the opening half the Knights defense forced the Panthers into third-and-long situations, but couldn’t get off the field.

The best of the bunch was junior running back Mike Waters, who hurt the Knights on several occasions. Waters rushed for 136 yards on 12 carries with three touchdowns. He got Imhotep on the board with a 40-yard scamper three minutes into the first quarter. He found paydirt again in the second and third quarters.

The Knights allowed by far the most points they given up this season. Their previous season-high was 19 points in a blowout victory over West Chester East in Week 1.

“I was trying to pick the team up the whole time,” Wright said. “We had a great season and we took a loss. Our team worked hard and we tried our best.”

Trailing 18-0 in the second quarter, the Knights used 13 plays to drive down to the Imhotep 7-yard line. But on fourth-and-goal, quarterback Jawan Collins was pushed out of bounds four yards shy of paydirt. Davoughnte Brown quickly got the Academy Park defense off the field when he intercepted Imhotep quarterback Nasir Boykin and returned the ball inside the Imhotep 20-yard line. Four plays later, Jermaine Wesley took a pitch from Collins and leaped across the goal line for the Knights’ first score.

As was often the case, though, Imhotep had an answer. The Panthers drove 65 yards in less than three minutes as Waters scored on a 12-yard run in the waning seconds of the first half. The backbreaker was a 20-yard reception by Nasir Lewis on fourth down to extend Imhotep’s drive.

“We did a terrific job on downs one and two,” Vosheski said. “It just happens sometimes. We couldn’t get a stop. It happens at every level.”

Wright said it was difficult trying to keep pace with Imhotep’s set of dynamic skill players.

“No. 5 (Aamir Brown) was pretty fast. He’s a good receiver,” he said. “I was just trying to hold my own. They’ve got good players, very talented players. We tried to play our game, you know? We’ve been dominant all season, but a team is going to come down the road and catch you. This is the team that came down the road and they caught us. They got us.”

The Knights fumbled the ball away on the opening kickoff of the second half and Imhotep put the game away with two touchdowns in the third quarter. Emotions got the best of both sides and Academy Park linebacker Terrel Lee was tossed for putting his hand on the arm of an official, who was attempting to break up a scrum on the Knights sideline. Lee did not react with intent to harm.

“(The official) initially said that our player pushed him, but listening to my coaches up top, he came in to separate them and he put his hand on Terrel and Terrel smacked his hand away,” Vosheski said. “That’s what the referee said later on. It was ticky-tack for that to happen. We had bigger problems tonight, and that didn’t help. He’s a captain and a defensive leader. That didn’t help at all.”

Wesley found the end zone again midway through the fourth quarter for the game’s final touchdown. Collins (6-of-11, 70 yards) racked up team-high 59 yards rushing for the Knights and Wesley finished with 51. DeAndray Covert had a pair of catches for 50 yards.

Despite the loss, the Knights can be proud of their success in 2015. It was a year to remember.

“We made it this far,” said junior offensive lineman John Ellis. “We just have to focus on next year. It’s hard to speak right now. We really became a family this year.”