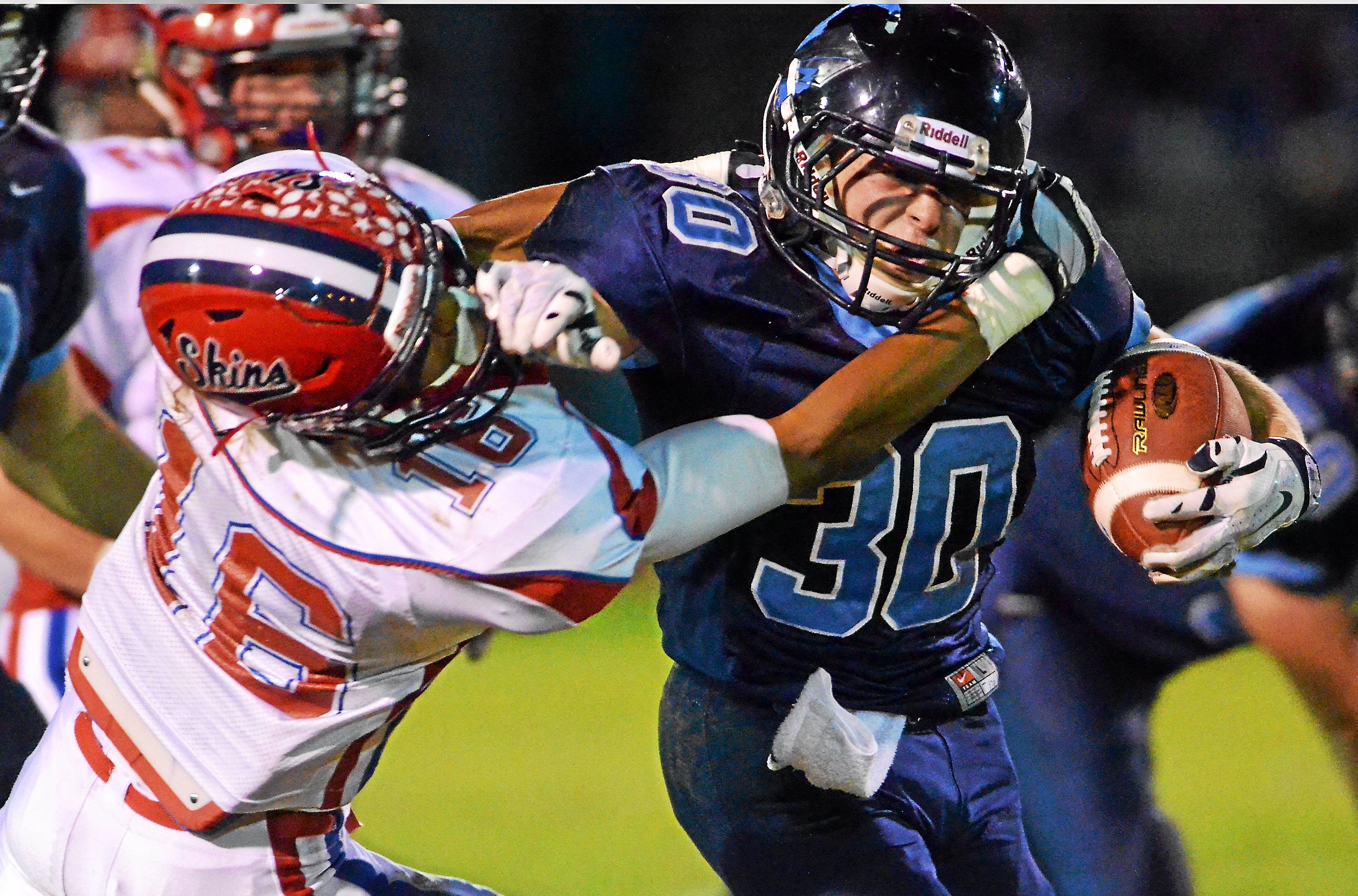 TOWAMENCIN >> On its first play from scrimmage, North Penn fumbled the ball away at its own five-yard line. Four plays later Neshaminy had a fourth-and-goal from the North Penn half-yard line and was ready to go for it.

It was early in the game, but it was time for the North Penn defense to make a play.

“That (goal-line stand) was huge,” North Penn head coach Dick Beck said after the game. “That was a game changer. If we give them seven points to start the game… that was a big momentum changer for us.”

North Penn kept that momentum all night and rode it to a 28-7 semifinal victory over Neshaminy Friday night at Crawford Stadium to earn a trip to the District 1-AAAA final.

Nyfease West, who has been a horse for the Knights throughout the season and into the playoffs, carried the ball 27 times for 233 yards and two touchdowns.

“I thought our o-line, the last two games, has really come through big for us and obviously Nyfease is a great runner,” Beck said.

Up next for North Penn is third-seeded Upper Dublin in the District 1 final. That game will be played at Souderton Area High School next Saturday at noon. While it will be UD’s first district final, this is familiar territory for Beck and the Knights.

“We’ll treat it just like another game. We get another day of practice,” Beck said. “But I think the excitement of being in the district final.. it should be a great atmosphere and I think our kids are excited about it. I think they’re fresh.”

Of West’s 200-plus yard performance, the most important real estate came on a drive that followed a Mason Jones touchdown pass to Billy Ritchey for Neshaminy in the third quarter, bringing the score to 14-7 in favor of the Knights. Two carries and 65 yards later West was in the end zone and North Penn had a 21-7 lead.

“That was huge for us,” West said. “I was talking to the o-line earlier and saying ‘Come on guys, we gotta get it going,’ and they came out for me. I just took it the distance.”

Not to be outdone by a North Penn offense that accounted for 458 total yards on the night, the Knight defense also played big the entire evening.

“The d-coordinator (Zack Raffle) kept saying ‘we can get pressure without blitzing,’” Beck said. “So we’re dropping seven into coverage and not blitzing, that’s better for us. I thought we did a great job doing that.”

North Penn limited Neshaminy to 189 total yards in the game, including 37 yards rushing on 23 carries. The Knights added four sacks, two of which came from Keith Earle.

The first three drives of the game for North Penn started at its own five, one, and one-yard lines. Two of those were a result of letting Neshaminy punts roll out instead of fielding them.

The first punt the Knights did field proved useful, as Justis Henley picked up the ball and returned it to the Neshaminy 20. West would cash in from one yard out to give North Penn a 7-0 lead.

After a three-and-out by Neshaminy on its next possession, North Penn put together a statement drive at the end of the first half. The 11-play, 84-yard campaign was highlighted by a third-and-25 conversion on a pass from Reece Udinski to Henley for 35 yards. A few plays later Justin Ostopowicz took an inside handoff from Udinski 17 yards for a touchdown and the Knights led 14-0 with under 30 seconds left in the half.

Ostopowicz ended the game with 64 yards on six carries.

In the second half, North Penn continued to establish the run, which proved successful all night. The Knights had 333 yards rushing as a team on 42 carries and four touchdowns, the fourth scored by Dontae Stewart from 12 yards out.