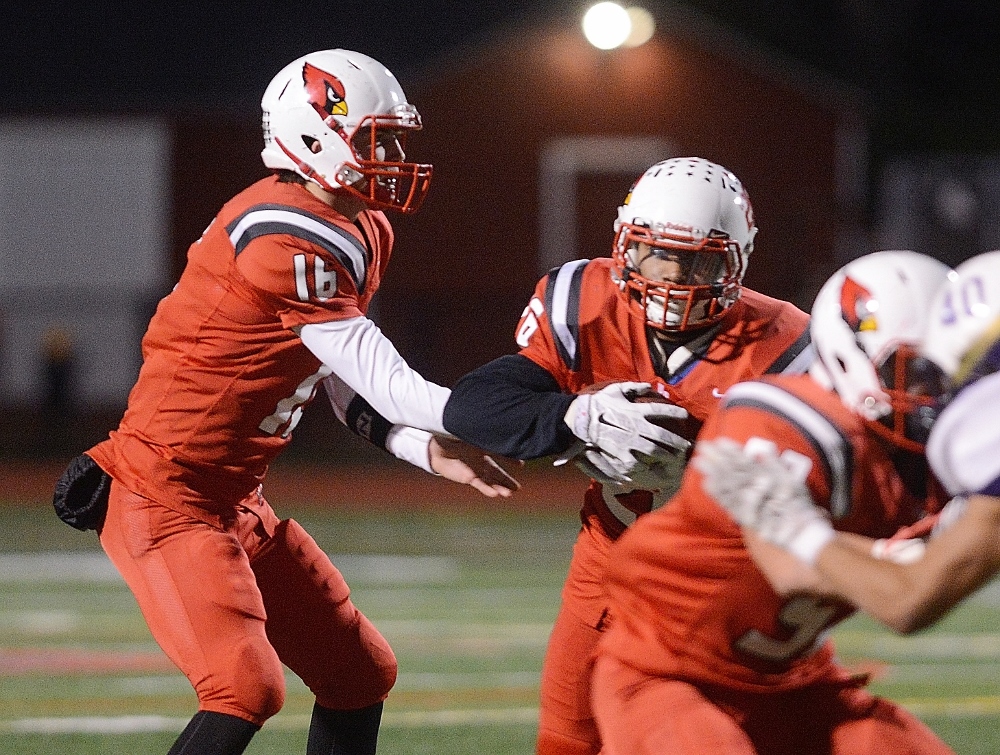 But it was host Upper Dublin that did all the scoring — and it did so very quickly.

The unbeaten Birds scored on their first four possessions and ran down the Royals, 45-14, to earn their second straight trip to the District One Class AAAA semifinals.

They’ll face the winner of Saturday night’s game between Perkiomen Valley and Pennsbury next weekend.

The Cardinals wasted no time, flying down the field on their first possession, and scoring on six plays, the final one being a Stacey Gardner 20-yard burst off the right side to put the home team up, 7-0, just 2:36 into the game.

“We worked backwards with our run game,” said Cardinals head coach Bret Stover. “Usually we use the pass to open up the run, Tonight we used the run to open up the pass.

“(The Royals) do some different things and they’re big up front. But we kind of punched them early and kept it up.”
After the Royals went three-and-out, Upper Dublin was at it again, with Stover’s 33-yard run setting up Gardner’s second touchdown, a 17-yard run that gave the Cardinals a 14-0 lead.

Once more, following the score, the Cardinals defense stuffed the Royals, and Upper Dublin ballooned its lead to 21-0 on a Stover 5-yard pass that was deflected at the line of scrimmage and dropped into the arms of Jack Rapine in the end zone.

The Royals showed some life two plays into their next possession when Isaiah Bruce broke a tackle at the line of scrimmage and flew 61 yards to the end zone.

But Upper Dublin remained non-plussed, and Stover hit Rapine with a 23-yard strike that pushed the advantage to 28-6 with 10:07 left in the second quarter.

The Cardinals’ next two drives ended in a blocked field goal and Upper Dublin running out of downs at the Royals 19. It appeared Upper Dublin would have to settle for a 28-6 lead at the break.

But late in the half’s final minute, Royals quarterback Christoff Minot was hit and his wobbly pass was intercepted by Isaiah Henrich, who returned the ball to the Royals 20-yard line.

After a Stover-to-James Lamppman pass got the Cards to the 1-yard line, Kaleif Lee plowed into the end zone with 19 seconds remaining in the half to push the lead to 35-6 at the break.

“We don’t see ‘man’ defense a lot,” said quarterback Ryan Stover, “but we felt we could beat it.

“Their No. 34 (safety Naiqjuan McKenzie) was real good. but we took some chances against him, and we had some success.”

Cardinals kicker Todd Spirt added a 26-yard field goal with 8:56 left in the third quarter, and the Cardinals added the finishing touches with 7:18 left in the fourth when Stover hit Danny Boggs with a quick out that turned into an 86-yard score

The Royals got one last score on a Bruce 43-yard run with 4:30 left in the game.

The Cardinals were back in the district semis, and they’re proud of the way they did it.

“We lost a lot of guys from last year’s team,” Ryan Stover said, “but we rallied and we’ve had a good year.”

“It’s been tough all year because people would have considered this a bad year if we hadn’t gotten back at least to the district semis,” Bret Stover said. “As coaches, we didn’t feel that way, but we feel we did it the right way.

“We took it one game at a time. I know that’s a cliche, but that’s just the way we did it.”