Bruce keeps piling up the yards as Upper Darby rolls 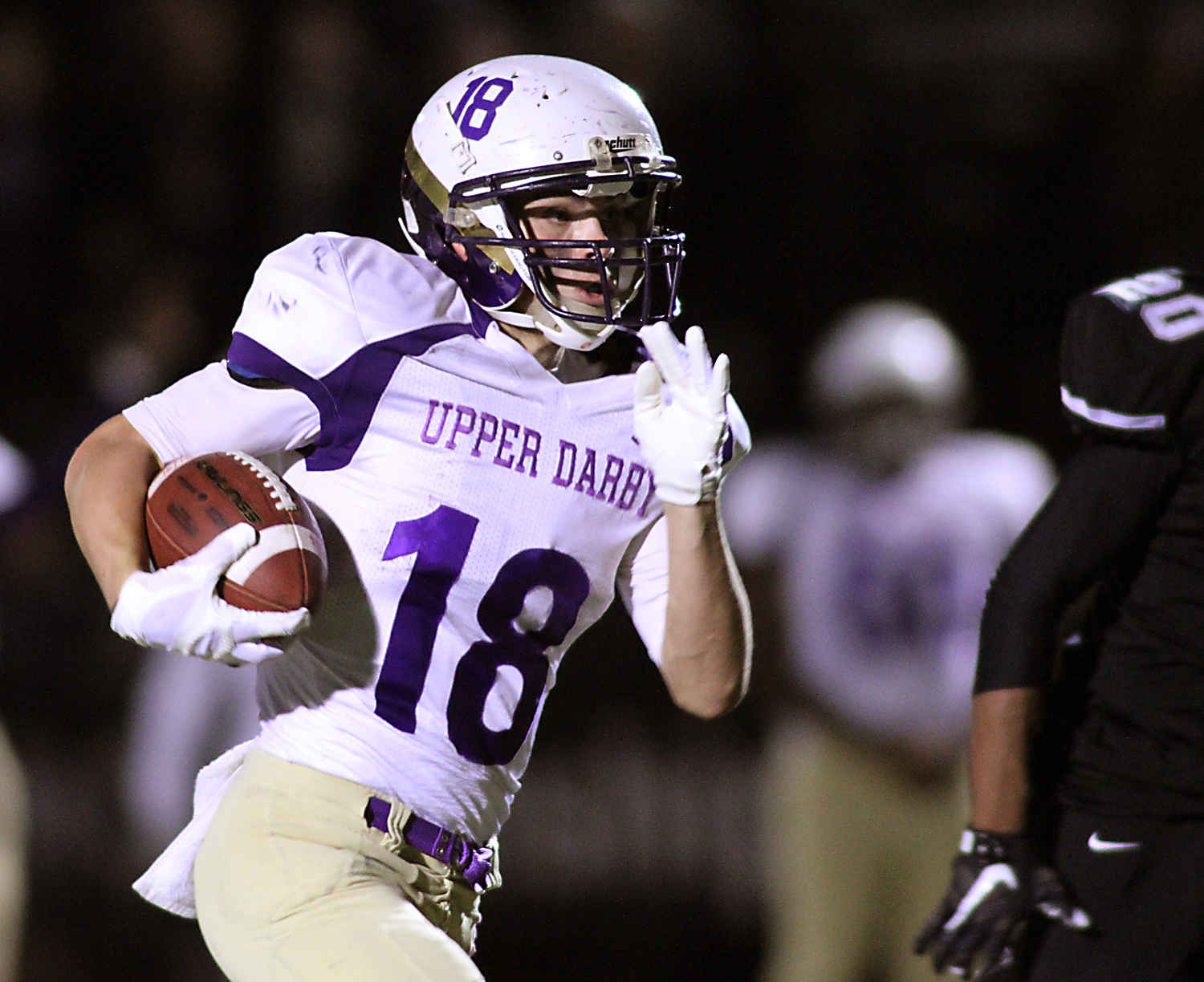 NETHER PROVIDENCE >> There were more than a few surprised people at halftime of the Upper Darby-Strath Haven game Friday night.

Considering the spots that the teams occupy in the Central League standings, the thought of seeing the Royals only lead the Panthers by a touchdown raised a few eyebrows. It didn’t go over well in the Upper Darby locker room, either, but the Royals never panicked.

Instead, they just rode their horse.

Isaiah Bruce took the second play from scrimmage in the second half 62 yards for a touchdown, and on the ensuing

drive, darted 44 yards to set up a 3-yard Christoff Minott touchdown. The haymakers did a number on Strath Haven, and by the end of the night, Bruce and the rest of the first-stringers watched from the sidelines as the Royals put the finishing touches on a 34-7 rout.

“We just stepped up up front. We knew we had to get tough. We knew what we had to do. We do this every day at practice. We know we’re not the biggest line in the league, but we had to step up and be tougher,” right guard Mazen Malak said.

“We came together as a team,” left guard Zeno Temple said. “We’re just a family right now. We’re jelling. We strive for it. Every week, we try to open up holes for Isaiah. Our O-line is all together right now.”

It’s rare that offensive linemen will publicly get credited with any stats — it comes with the territory of being a mauler — but Temple broke into a huge smile when he found out that Bruce had rumbled for 225 yards on 19 carries. Temple and Malak, along with the rest of the line, were a major reason for it, especially when they pulled during power runs.

“He’s just a great running back. His speed and agility are great and he’s a great person,” Temple said. “He pushes us to go hard and with those little cracks that we give him, he runs hard.”

As a result, Bruce is having a career year. Last year, he rushed for 891 yards at 7.3 yards per carry, but this go-round, he’s got bigger things in mind. His 225 yards gave him 1,368 this season and a pair of rushing touchdowns upped his total to 19 rushing touchdowns. Oh, and he got a rare opportunity to actually field a punt.

“They haven’t kicked me the ball all season,” Bruce said with a big smile. “That’s probably the first one I’ve been able to field. My blocking opened the hole and I took it from there.”

Eighty-seven yards later, Bruce had set the tone for the kind of night it was going to be for him. His three touchdowns gave him a total of 23 this year, putting him within range of the Delco single-season touchdown record of 35 held by 2010 Daily Times Player of the Year Matt Craig (Springfield) and 2012 Daily Times Player of the Year Adam Strouss (Episcopal Academy).

That offense is a huge reason why Upper Darby (7-1, 5-0) is rolling. Minott, who was 6-for-10 for 92 yards, is a lethal dual-threat quarterback. Receiver Brandon Morton hauled in two passes for 66 yards and Tyler George snared a 49-yard touchdown pass.

“Everybody’s a threat in their offense,” said cornerback Hunter Mazur, who had a 25-yard rush and a 39-yard kickoff return to spark the Panthers’ offense. “You don’t know when somebody’s just going to go off. No. 2 (Morton), their running back and their quarterback are all massive threats who have been playing really well.”

The Panthers (1-7, 1-5) got 54 hard-earned yards from Zach Newlon, and Evan Atsaves hit Van Bobo from 18 yards out on a fourth-down play. Atsaves injured his wrist, though, when he was sacked, and the Panthers were only able to scrape together two first downs in the second half and never attempted a pass with backup quarterback Ryan Morris.

“As a defense, we got more aggressive and we’re all getting to the ball,” defensive end and left tackle Shawn Page said. “We just picked up the intensity in the second half. When the offense moves, the defense moves.”

And in turn, the Royals look like they did Friday.