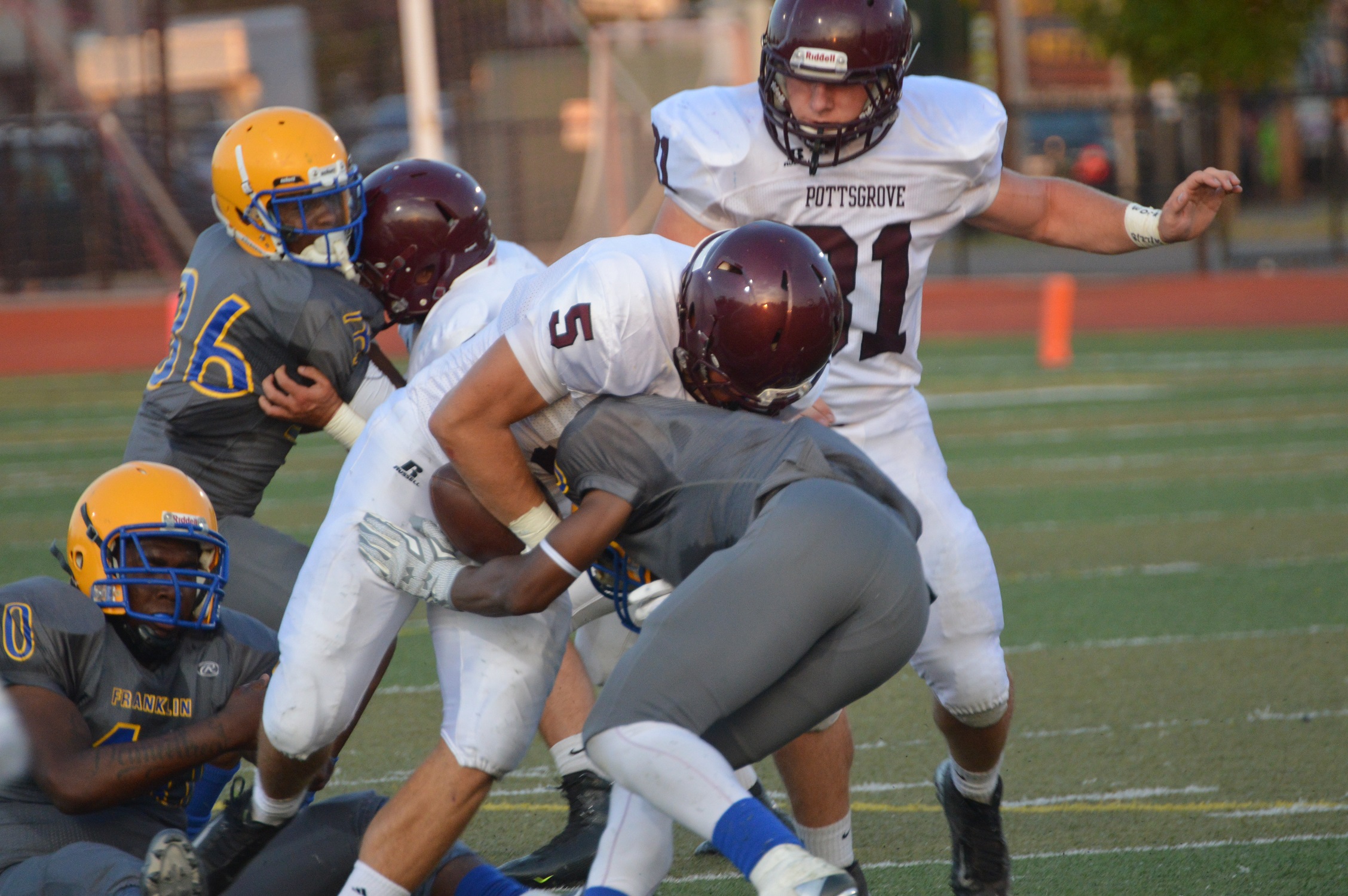 North Philadelphia >> It turned the ball over five times via fumble and saw four starters, including their starting quarterback, knocked out of the game due to various injuries.

Yet somehow throughout all of that, Pottsgrove hung in it.

Chris Defrancesco spearheaded a solid defensive effort with two sacks, a forced fumble and a touchdown while Ryan Finn was reliable in place of the injured Deyon Doctor at quarterback as the Falcons went step for step with Ben Franklin before ultimately falling 27-21 at Simon Gratz Saturday night.

“We had a lot of injuries with four starters going down,” Pottsgrove head coach Rick Pennypacker said. “We threw a lot of sophomores out there and some of the sophomores made sophomore mistakes but that’s not what killed us. We all made mistakes, including me. I’ll take the blame for it. We’ll rebound.

“I was proud of the way my kids played, I was. I’m not happy about a loss but they just played hard.”

Defranceso’s night was a microcosm of the Falcons defense throughout the contest. The 5-9 senior finished the game with three tackles for a loss with two sacks before coming away with a momentum boosting play in the third, stripping the ball from Electrons running back Nyeem Jones and running it 10 yards for the score to make it 13-13.

Christian Pace, Madison Kelsey, Eric Bodolus and Tyler Smith all registered sacks as the Falcons defense stood tall through the majority of the game, only faltering in two back-breaking plays in the final 13 minutes.

Devin Darden connected with a wide-open Jordan Williams for a 74-yard touchdown to make it 20-13 before connecting again with Williams on a 52-yard scoring strike to ice the game with less than two minutes remaining. The second connection was made possible after the Electrons recovered the ball on their own 48 after it was ruled that a Pottsgrove player came in contact with the ball after the Falcons forced the Electrons to punt the ball after going three-and-out.

Williams finished the game with five receptions for 184 yards and two scores with Darden 11-of-19 for 288 yards and three touchdowns.

“I thought Bodolus and Kelsey played tremendous on defense,” Pennypacker said. “I thought Ryan Finn and Defrancesco played very well on defense. We’re down by one touchdown and have that fumble. That was the game. We had them on the ropes, had them tired, I thought we wore them down a bit and all of a sudden they gave the ball back to them.”

Finn, stepping in for Doctor who left in the second quarter, finished the game 5-of-8 for 70 yards and one touchdown that came with 44 seconds left as he connected with Max Stump for a 12-yard score to finish the game’s scoring.

“He did a nice job filling in,” Pennypacker said of Finn. “He didn’t get as many snaps during the week with the first team but he will this week. I thought he did a great job.”

“They didn’t quit, (they) came down in a pretty tough environment against a very, very athletic team. We won’t see receivers that athletic across the board.”

NOTES >> Ben Franklin had two touchdowns negated because of penalties, an 86-yard punt return in the first and an 86-yard kickoff return in the second. The Electrons finished the game with 18 penalties for 125 yards. … Doctor finished the game 4-of-6 for 61 yards before exiting. … Tyrell Barr had 68 yards on the ground on 13 carries with one score while Christian Pace had 81 yards receiving on two receptions, his longest a 41-yarder.