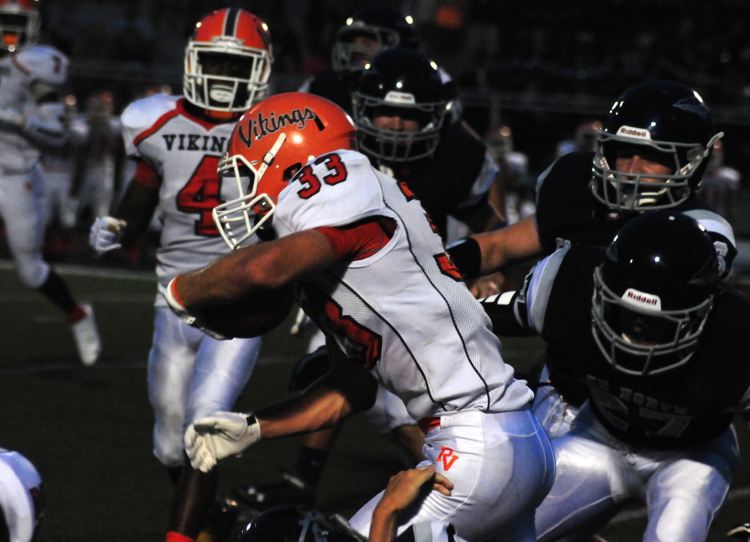 By DAN DUNKIN, For PaPrepLive.com

NEWTOWN – It was the Brandon McIlwain show in the first half. But as much as the South Carolina commit tried to simulate Superman, Perkiomen Valley came back like wildfire in the second half and buried Council Rock North, 56-36.

McIlwain, a remarkably athletic 6-2 quarterback and one of the nation’s top prospects, accounted for 259 yards from scrimmage in the first half – 122 rushing, 137 passing – as the Indians jumped out to a 16-0 lead and led 30-21 at halftime as Brandon added a pair of scoring strikes through the air. Indeed, McIlwain ran 70 yards for a score on CR North’s first possession.

But the Vikings have their own excellent QB in junior lefty Stephen Sturm, and he and his teammates took over the last two quarters, avenging a 29-27 loss to CR North last year in Collegeville. Trailing twice in this battle, the defending PAC-10 champs showed poise and toughness in rallying. Coach Scott Reed was very pleased.

“My speech before the game was, ‘Let’s see if we grew up,’” Reed said. “We grew up. I was most happy about how we stayed calm. We made some nice things happen in the second half.”

To the tune of a 35-6 shellacking of the Indians after the intermission. The only score by CR North in the second half was a 48-yard toss over the middle to senior wideout Tyler Nowmos (6-144 yds.) who also grabbed a 48-yard TD pass in the second quarter to put Rock on top 30-21 with 1:46 to go in first half.

While the Indian defense bent in allowing Perk Valley to drive the length of the field in the closing minutes of the first half, McIlwain made a huge tackle at the two yard line on second down, Sturm threw incomplete on third and PV kicker Garrett Patla saw a chip shot field goal come up short after getting a partial block by Nowmos.

“I felt good going into the half; getting that stop right before halftime, I thought we stopped their momentum,” said CR North head coach Adam Collachi. “That just wasn’t the case.

“That’s a well-coached football team; they came out with a good plan in the second half and they executed.”

PV coach Reed noted that Ryan McCloud’s second interception of McIlwain was the turning point. It gave the Vikings the ball on Rock’s 33 yard line as North led 30-28. A few plays later, Ronnie Arch (13-86 yds.) roared in from 12 yards out and the Vikings had the lead for good with 6:39 to play in the third quarter.

Sturm (27-43-0, 329 yds.) threw three second-half TDs. Justin Jaworski (8-108 yds.) was a particular pain for the Indians, continually getting open, snaring five passes in the second half.

“We made some adjustments and (the coaches) moved me around,” he said. “I got one-on-one with the cornerback, and Stephen is a really good quarterback.”

While CR North appeared to have all the momentum at the break, it hit a brick wall as the Vikings defense came up big in the second half and the PV offense, far more balanced than the Indians, put on a display.

A Sturm-to-Jaworski 3-yard TD toss made it 30-28 with 8:56 to go in the third. Perk Valley, which had mounted scoring drives of 66 and 67 yards the first half, played with that kind of confidence and flow throughout the last two quarters. After getting the lead, 35-30, on Arch’s 11-yard run, they rolled to touchdowns on their next four possessions.

“We gave ‘em a 16-point spot but stayed calm,” Reed said. “We stopped ourselves a number of times. But we maintained our aggressiveness and didn’t really change the game plan.

“We knew we would have to score a lot of points; Brandon is one of the best players in the nation. And our defense really made plays when it had to.”

The Vikings added fourth-quarter scores on a 5-yard scoring toss from Sturm to sophomore Remy Sell, his second TD strike of the night. Perk Valley put the final dagger in on David Williams’ 2-yard touchdown run with 1:50 remaining.

For his part, McIlwain finished his night throwing 18-for-33 for 225 yards and three TDs, adding 114 yards and two more scores on 17 rushes.

He had nowhere to run in the second half, however, and Council Rock’s third-quarter possessions went: interception, 3-and-out, 3-and-out.

Conversely, the Vikings scored on every single drive they started in the second half.

That’s all you need to know.