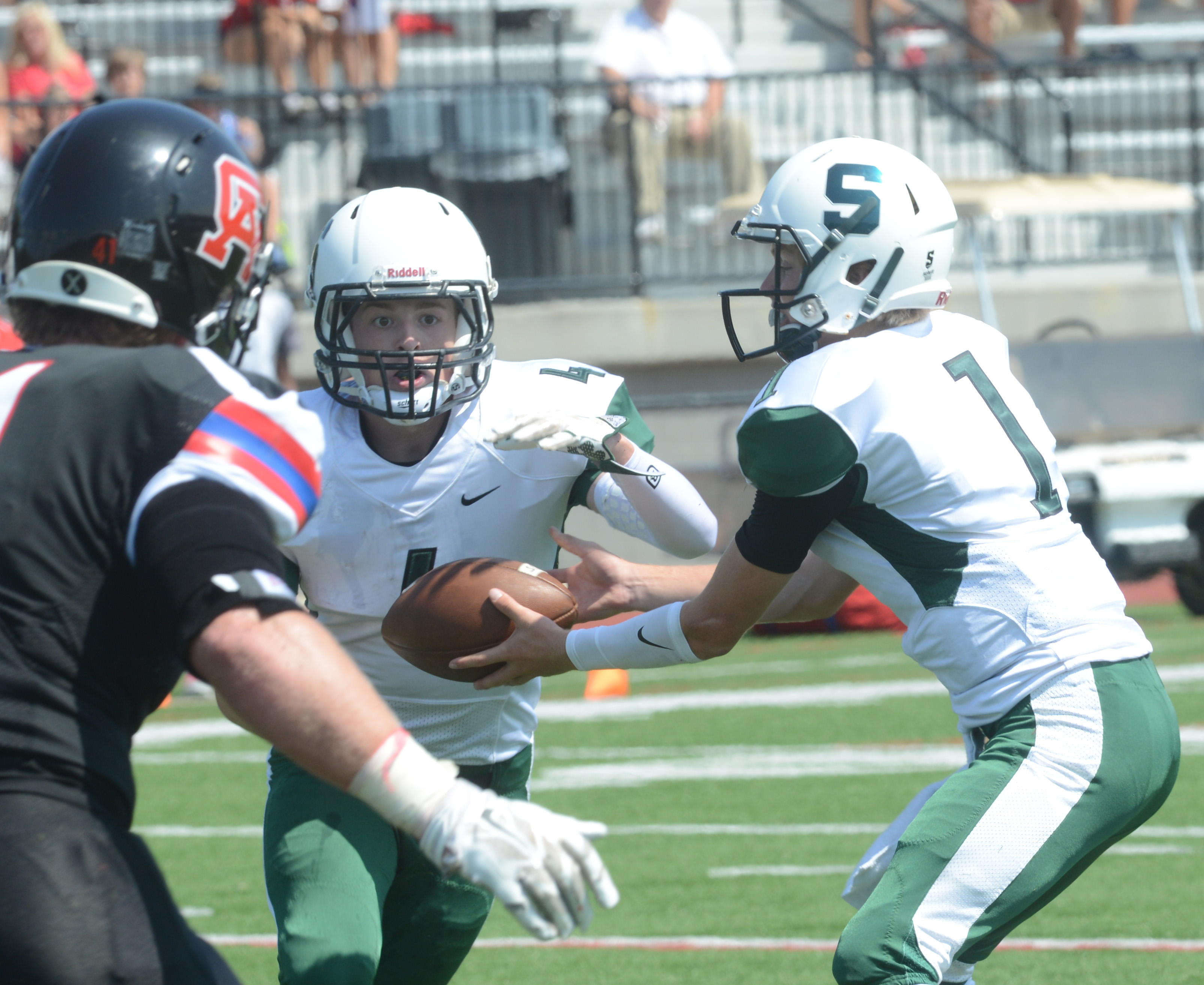 WHITEMARSH >> The football season-opener couldn’t have begun better for Germantown Academy and its fans, who watched KJ Cartwright sprint 77 yards for a touchdown on the Patriots’ first play from scrimmage.

But GA, which hosted scheduled home team and returning District One playoff qualifier Bishop Shanahan out of necessity because the Eagles’ home field is being readied for the debut of lights next month, would wind up hanging on by its collective fingernails to escape with a 16-13 victory because Shanahan ignored a 16-point halftime deficit and kept coming.

“They did exactly what we didn’t want to see happen,” said Patriots head coach Matt Dence, who like the rest of the Patriots sweated out the final minutes of the fourth quarter. “That’s a real good team over there, they’re a lot bigger than we thought, and they did what they needed to do in the second half.”

Which is the complete opposite of what the Eagles did in the first half.

After giving up the Cartwright touchdown run, Shanahan actually saw its fortunes get worse.

By the break, the Eagles had turned the ball over three times and botched a field-goal attempt via a bad snap.

“Mistakes killed us,” said Eagles head coach Paul Meyers. “We missed a field goal, we missed an extra point. We made too many mistakes to beat a good team.”

Meanwhile, the Patriots went into halftime lamenting some missed opportunities of their own.

After the Cartwright touchdown, GA would begin five drives inside Shanahan territory, yet only managed to tack on 10 more points.

“That was my worry,” Dence said. “I thought we would have scored at least one more time in the half.”

Probably fortunate to be down only two possessions, the Eagles regrouped at halftime.

“At halftime we talked about keeping our heads up,” Meyers said. “We wanted to score early and get some momentum back.”

The Eagles did score, but it took better than half of the third quarter to put points up, via a touchdown pass from quarterback Nick Skulski to Mike Sprague. Then, after a Brendan Dearing interception got Shanahan the ball back, the Eagles went 65 yards on five plays, including a 38-yard touchdown strike from Skulski to Dan Neuhaus, to pull within a score.

That turned the fourth quarter into a nailbiter, although the Eagles would not reach GA territory on any of its three fourth-quarter offensive possessions.

“We were real good against the pass in the first half,” said GA linebacker Jimmy McGettigan, “but they came up with a few things we couldn’t stop in the second.

“But we stopped them three times in the fourth quarter. We just played good defense.”

In the first half, the Patriots’ offense was much better, using the Cartwright score and a 27-yard Vince Capone field goal to build a 9-0 lead.

But perhaps the biggest points came with 14 seconds left in the half, when GA quarterback Kyle McCloskey flicked a 3-yard touchdown pass to Mike Gilmore, a score set up one play previous when McCloskey connected with Jimmy McAfee for 24 yards on a fourth-and-14 play.

Shanahan would scare the Patriots mightily in the second half, but GA would prevail — barely.

The final nail would come when McCloskey drew the Eagles defense offsides on fourth-and-two in the game’s final 70 seconds.

“We felt real good about the play we had in,” Dence said, “but Kyle went with a double cadence and it worked for us.”

“We’re young and our youth showed,” Meyers said of the Eagles.

GA next takes on Prep Charter in a contest slated for the South Philadelphia super site, while Shanahan travels to Pleasantville, N.J.