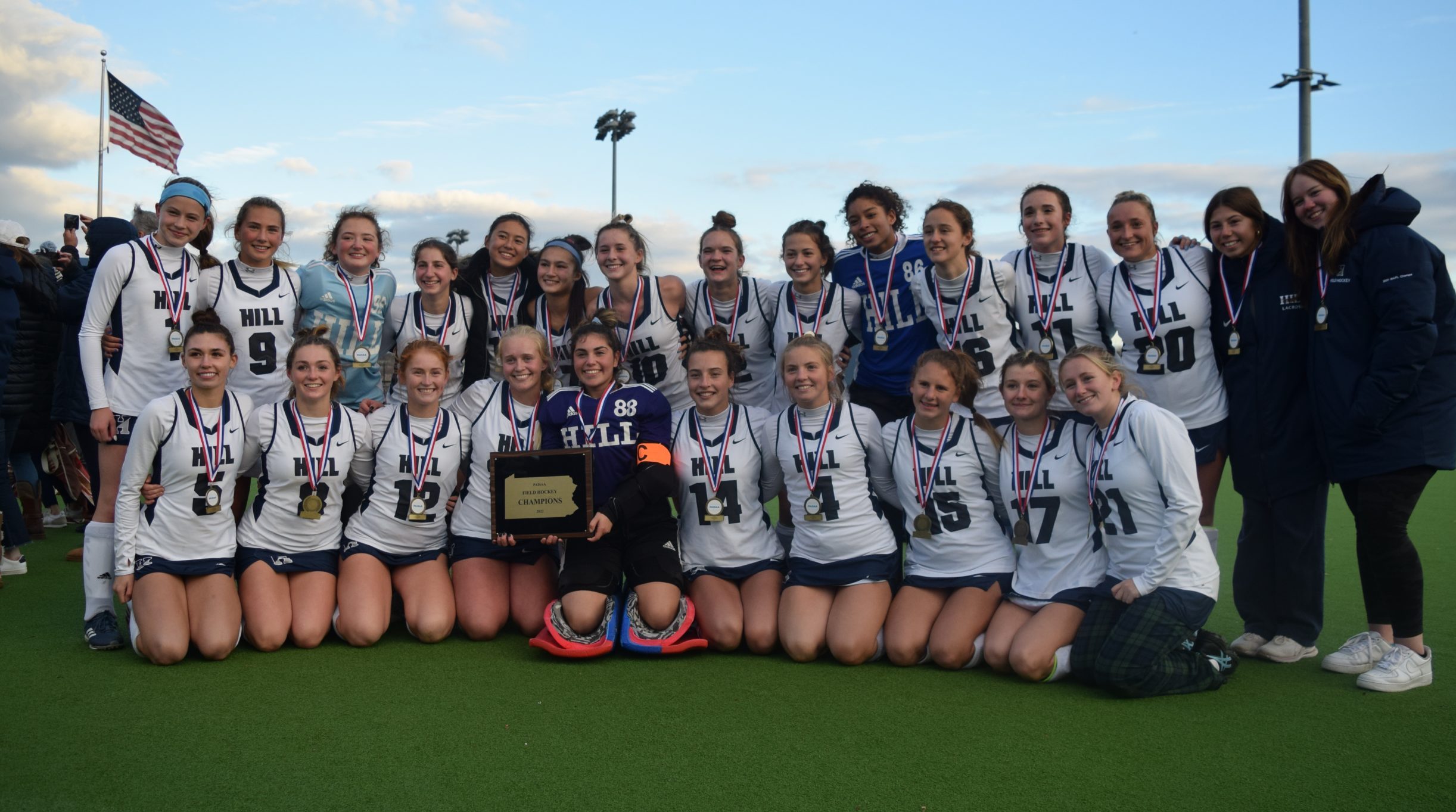 The Hill School field hockey team poses with the PAISAA championship plaque after winning the title over Episcopal Aacdemy Wednesday at the Proving Grounds in Conshohocken. (Austin Hertzog - MediaNews Group)

CONSHOHOCKEN >> The teams were the same as last year. Once again they were locked in a tie score late in the match. And just as in last season’s Pennsylvania Independent Schools Athletic Association field hockey championship match, the outcome was decided by a goal in the final minute.

But this time there was one big difference. This time it was The Hill School coming out on top in a hard-fought contest, winning by an identical 3-2 score over Episcopal Academy Wednesday afternoon at the Proving Grounds.

Opal Sparling drilled home the game-winner off a pass from Jaedyn Scarlatos on a penalty corner play with 32 seconds to go. Riley Savage scored the other two goals for the Blues (21-1). Bella Notaro and Charly Bruder scored for the Churchwomen (17-3-2), who had won the previous three titles.

The Hill School’s Opal Sparling, facing, celebrates with teammates after scoring the game-winning goal in the final minute against Episcopal Academy in the PAISAA championship Wednesday at the Proving Grounds in Conshohocken. (Austin Hertzog – MediaNews Group)

Except for a breakaway goal by Bruder that tied the score with 7:44 remaining, the Blues dominated the second half and knew that it was only a matter of time before they were able to break the deadlock.

“We were just really motivated,” said Sparling, who ripped in a shot from just inside the top of the circle. “We knew it was coming and we showed that we could do it. It’s like redemption from last year.”

“Eventually, we knew it was coming,” said Savage. “It was just when. We created those plays, being in the right place at the right time.”

The Churchwomen opened the scoring with 3:26 to go in the first quarter as the Blues could not clear the ball away from the front of the cage and Notaro knocked it in.

Hill School’s Riley Savage celebrates after her second goal of the game against Episcopal Academy in the PAISAA championship Wednesday at the Proving Grounds in Conshohocken. (Austin Hertzog – MediaNews Group)

The Hill School tied it in the second quarter – also with 3:26 to go – as Savage scored off a pass from Aubrey Turner.

“There were some pregame jitters,” said Savage. “I think we were getting into the groove. We got into the flow, just like any other game.”

That was especially true in the second half as Riley scored off a rebound 3:17 into the third quarter and the Blues continued to control the play with 13 corners after the intermission to none for Episcopal.

Bruder tied it when she picked up the ball in her own half of the field, shot past defenders into the open  and inside the circle and blasted a low backhanded shot into the cage.

But the Blues took over again until the end.

Episcopal Academy goalie Isabel Andrews makes a diving save on a shot by Hill School’s Jaedyn Scarlatos in the PAISAA championship Wednesday at the Proving Grounds in Conshohocken. (Austin Hertzog – MediaNews Group)

“We just had good transitions from the defense to the offense,” said Sparling. “We passed the ball well. We didn’t try to dribble it through everybody.”

“We got the extra push in the last five minutes,” said Savage.

Last year, the Churchwomen had scored in the final minute and the Blues had little time to retaliate.

“It was a good feeling,” Hill’s Michigan-bound goalkeeper Hala Silverstein said concerning Wednesday’s win. “It’s very funny that it was the same score. The tables were turned. It’s nice to end on a good note.

The Hill School’s Opal Sparling reacts after scoring the game-winning goal in the final minute against Episcopal Academy in the PAISAA championship Wednesday at the Proving Grounds in Conshohocken. (Austin Hertzog – MediaNews Group)

The Hill School’s Aubrey Turner works the ball near the EA goal in the PAISAA championship Wednesday at the Proving Grounds in Conshohocken. (Austin Hertzog – MediaNews Group)

The Blues had defeated Episcopal 5-2 on September 16. And while The Hill had outscored its opponents by a combined 12-0 score in the first two rounds of the tournament, the Churchwomen won two straight by a goal each.

“I thought both teams played super-phenomenal games,” said Episcopal coach Paul Zelenak. “We wanted to stretch it out after losing 5-2. We put our best foot forward. .

“Our team really, really grew. Take 21 games and put ourselves in position to win a championship. I’m super-proud of their attitude the whole game.”

The Blues also grew during the course of the year.

“We’ve just been working really hard, this season,” said Savage. “We built a strong bond and worked really hard for it.”