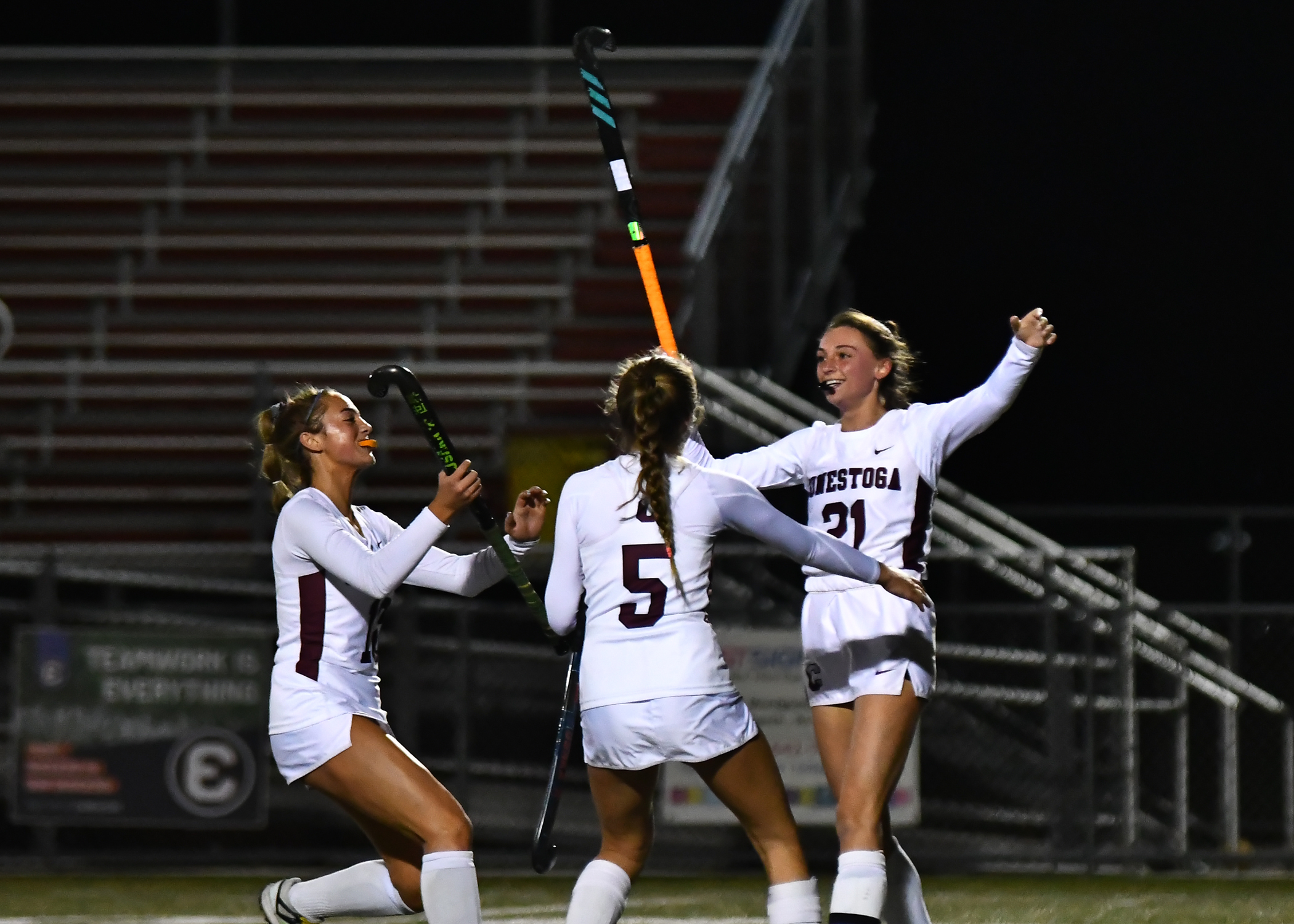 BERWYN >> Conestoga shook off the sting of last weekend’s heart-breaking loss in the District 1, Class 3A championship game, and rebounded with a businesslike win over Penn Manor. The Pioneers (20-2) converted on three penalty corners and played a stifling defense to hand the Comets (16-6) a 3-1 defeat at Teamer Field Tuesday night.

With the win, Conestoga advances to Saturday’s quarterfinal round, where they will square off against Manheim Township, the District 3 third-place finisher, a 2-1 winner over Pine-Richland Tuesday.

“Penn Manor has a really strong program,” said Pioneer coach Regan Marscher. “They had a lot of great passing, and some really nice block tackles that stopped us a few times. I’m proud of the resiliency the girls showed, especially when some calls didn’t go our way. They just kept going and kept plugging until we got the win.”

The Comets, who were the fourth-place finisher in District 3, came out firing, and forced the first penalty corner less than a minute into the game, and four in the first five minutes. But ’Stoga goalie Alex Lepore and her defensive teammates were up to the task, and made sure the visitor’s side of the scoreboard stayed at zero until the Pioneer offense got going.

“We were ready,” said Lepore. “They came out strong on offense, but we came out just as strong defensively. As the game wore on, we kind of got used to their style of play and settled in. I’m so excited that we’re moving on and have more field hockey to come. Our passing patterns were amazing today, and we’re playing well defensively. I think we have a lot of season to go.”

The Pioneers have been able to count on the defense throughout the post season, and have now outscored the opposition 17-3 in four post-season contests.

“Alex did such a great job covering that right post,” said Marscher. “She was super quick and made some amazing saves. She did a great job for us tonight.”

With time winding down in the first period, Conestoga was awarded a penalty corner, and converted with a goal from Kate Galica for a 1-0 lead.

Two minutes later, the Pioneers got another corner opportunity, and once again, took advantage, this time with a goal from Shae Wozniak, with an assist from Lexi Patterson.

Conestoga’s Shae Wozniak gets out in front of her Penn Manor defender, Cait McGough (BILL RUDICK for MEDIANEWS GROUP)

“Our theme coming into this game was ‘resilience,’ and we showed it all game,” said Wozniak. “Our goal was to come out and get a corner in the first five minutes, and just get off to a strong start. All three of our goals came on corners, which is really rewarding for us.”

The Comets cut the margin in half early in the third period, converting a corner of their own barely 30-seconds into the period. Avery Bradburn delivered a pass to the stick of Tristan Groff, and Groff slammed it home for the score, and the game entered the final period with a 2-1 score.

Hit with a pair of cards in quick succession, Conestoga found itself down two players midway through the final period. But the Pioneers didn’t flinch, still getting enough pressure in the circle to force another corner. Wozniak made sure the opportunity wasn’t wasted, hitting a rocket of a shot for her second goal of the day and a 3-1 lead that would hold up as the final.

“I’m using the word a lot tonight, but once again, we showed resiliency,” said Marscher. “They didn’t even let themselves get down even when we were playing shorthanded by two players. To still get that corner try, and to get that extra goal was huge. But this was just the first step in states. We’ve got to get ready for Saturday.”