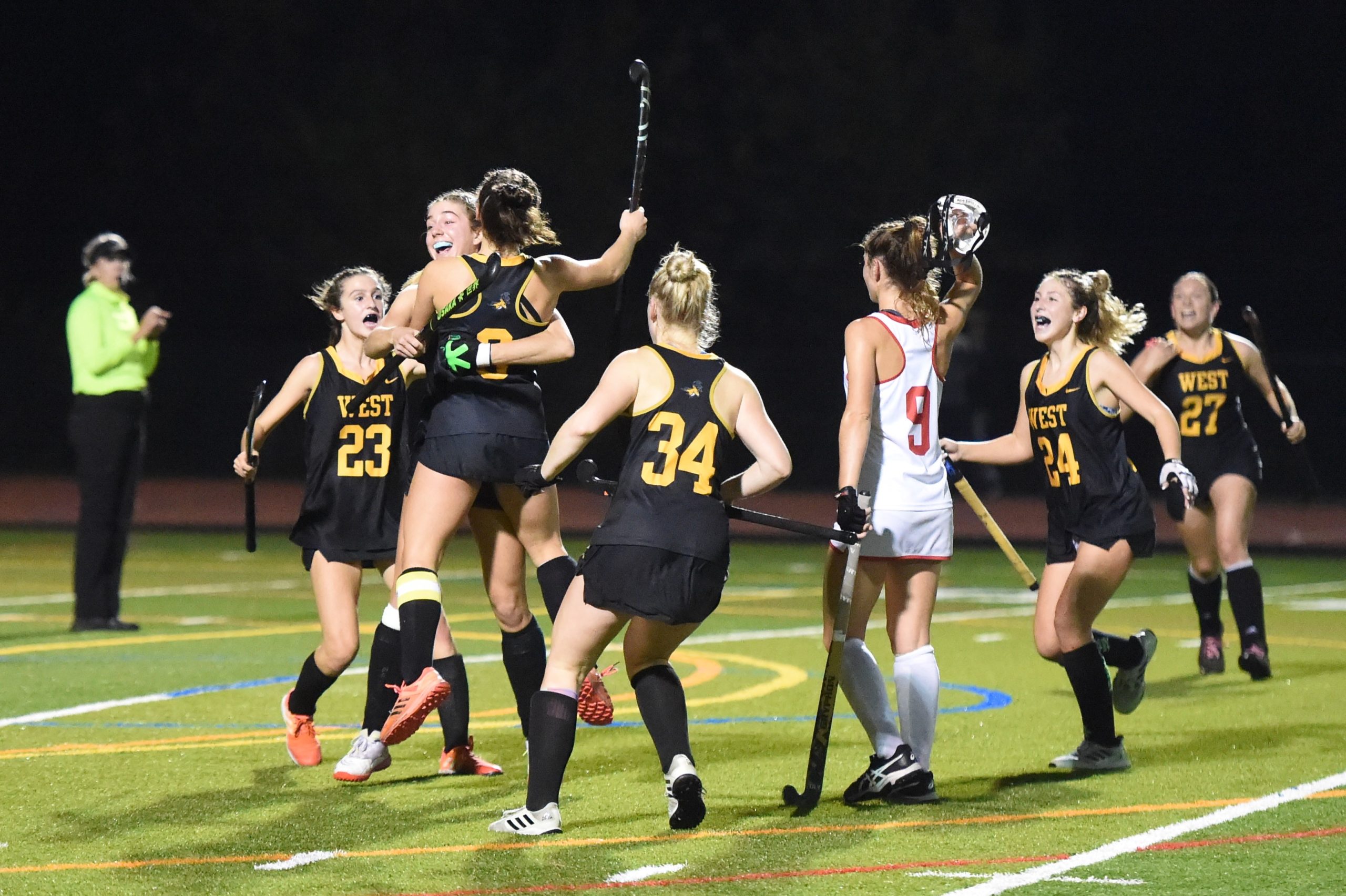 Central Bucks West celebrates after a goal by Lily Cosner with no time remaining in the third quarter against Souderton in their District 1-3A fifth-place playback on Tuesday, Nov. 1, 2022. (Mike Cabrey/MediaNews Group)

FRANCONIA >> Lily Cosner was looking forward to celebrating something memorable on her birthday.

“I definitely went out there hoping it would be,” the Central Bucks West junior said. “It wouldn’t be a really good birthday wish if I went home with a loss.”

Cosner made sure the Bucks field hockey team had a reason to party Tuesday night, scoring on a corner with no time remaining in the third quarter for the lone goal in the District 1-3A fifth-place semifinal, seventh-seeded CB West edging host No. 6 Souderton 1-0 to clinch its first PIAA appearance in six seasons.

“It’s honestly the best feeling,” Cosner said. “I know we went in here just happy that we even made it to playoffs and let alone the bye. And now, I don’t think any of us of believed that we really would’ve made it to states.”

Not much separated the Suburban One League Colonial Division rivals, who were playing for the third time after splitting their two regular-season matchups. The Bucks broke the 0-0 stalemate on the third of three straight corners, Cosner finding the back of the cage off the insertion pass from Kendall Siegle.

“We knew today was going to be an even tougher battle than when we beat them 3-0 cause we knew that they didn’t like losing to us,” said Cosner, who has verbally committed to Delaware. “So I think we came out here knowing that we had to give it 110 percent more than we did last time.”

The Bucks (18-2-1) advance to visit No. 5 Methacton in the district fifth place game Friday. Methacton defeated No. 8 Garnet Valley 2-0. Fifth place faces the District 11 champion in the first round of states while sixth place takes on the District 3/6 regional champion.

CB West’s last PIAA appearance came in 2016 when it took second in District 1-3A.

“It feels great, Siegle said. “This is a tough team. We knew that coming into it. I’m glad we were able to execute and secure a spot in states.”

Central Bucks West’s Lily Cosner (6) and Aida Ierubino (23) hug after Cosner’s goal with no time remaining in the third quarter against Souderton during their District 1-3A fifth place semifinal on Tuesday, Nov. 1, 2022. (Mike Cabrey/MediaNews Group)

“Back in the day they used to keep possession time, field hockey, we definitely had possession time but that doesn’t do you much good unless you can put one on the scoreboard,” Indians coach Sue Casciato said. “So it was a well-played game both ways and we’ve just had a little bit of a scoring drought.”

Souderton (17-4-0) scored 75 goals in its first 17 games – an average of more than four goals per game (4.4) – but were shut out by the Bucks in its regular season finale 3-0 Oct. 18. After a 3-0 victory over Downingtown East in the second round, the Indians have been blanked by Downingtown West in the quarterfinals then again by CB West Tuesday.

“We’ve been really struggling to score,” Casciato said. “We didn’t score against Downingtown West and we had more corners than they did. We looked good against Downingtown East and don’t think we looked bad tonight but weren’t not finishing so that’s a little frustrating.”

Central Bucks West’s Aida Ierubino (23) looks to control the ball on her stick against Souderton during their District 1-3A fifth place semifinal on Tuesday, Nov. 1, 2022. (Mike Cabrey/MediaNews Group)

Souderton had 12 corners to CB West’s eight. Bucks goalie Kendra Pitts made six saves. Indians keeper Meredith DeMarzio – who was injured in the game’s final seconds as she slid to deny a West player, who tumbled over the goalie – has four saves.

“I don’t even feel their goalie had to make as many big saves today,” Casciato said. “We got ourselves trapped a little too close – we were on the end line a few too many times with some of our shots and right on the right post there we needed to center the ball a little bit better so we had a little bit better angle to goal but we were still fighting.”

The Bucks’ victory over Souderton late in October gave CB West a chance to split the SOL Colonial with the Indians. Instead, a 1-1 tie with Neshaminy allowed Souderton to take the division crown outright.

In its first district game since 2017, Central Bucks West avenged the draw by rolling past Neshaminy 6-1 in the second round but were sent to playbacks after getting upset by Spring-Ford 3-2 in the quarters.

“I think coming off of the loss and the tie, we just came out here and we were like we cannot lose anymore or tie, we cannot do it,” Cosner said. “So we kind of brought the momentum from the beginning of the season back and we just went with it.”

After two untimed corners, West earned a third and made the most of the opportunity – Siegle sending the insert pass to Lily Cosner at the top-left of the circle for a shot that found its way into the back of the cage for a 1-0 lead going to the fourth.

“Sometimes the simple ones work the best,” Siegle said. “Less passing to mess up.”