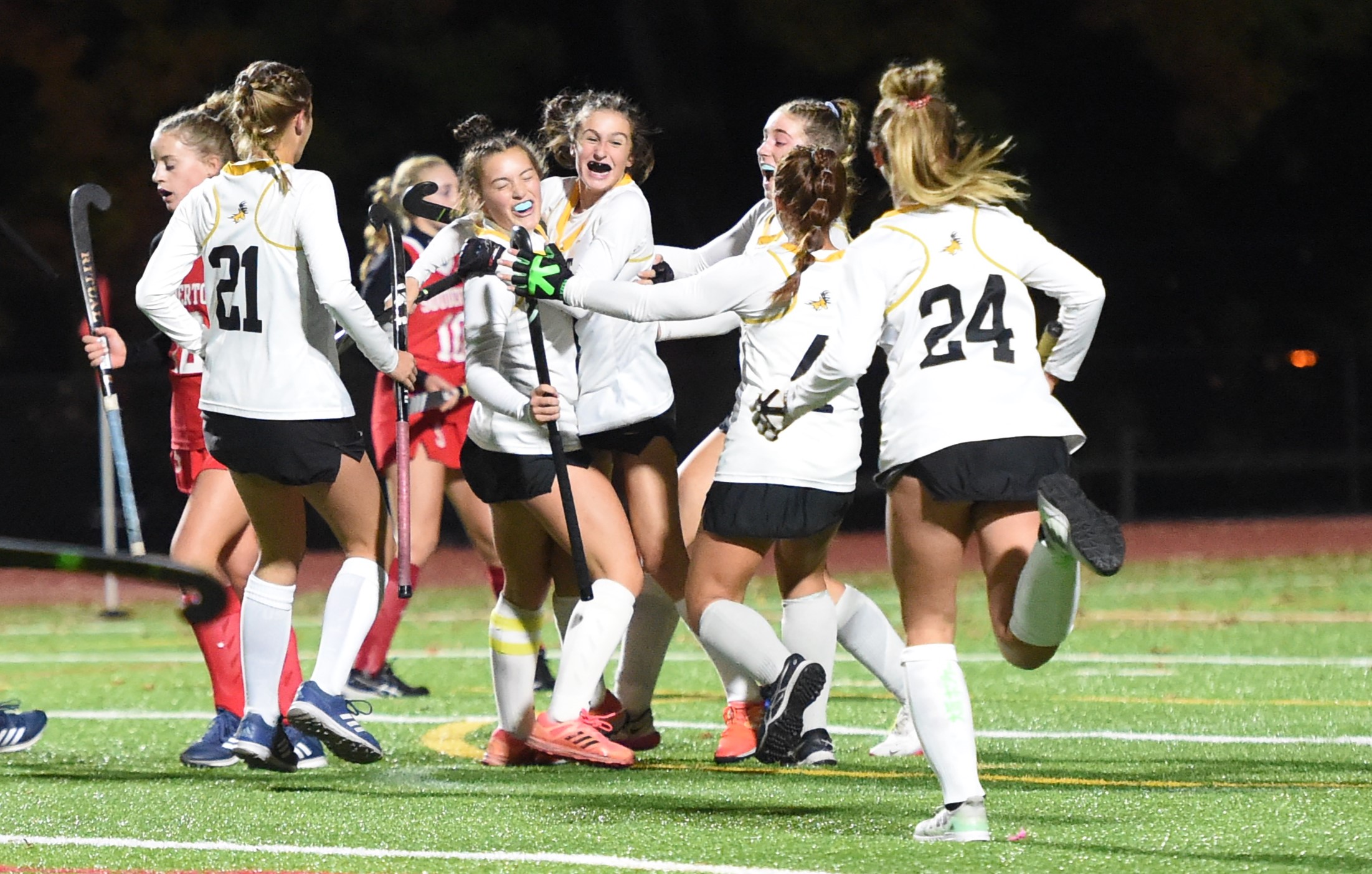 Central Bucks West players celebrate after a first-quarter goal by Lily Cosner (6) during their game against Souderton on Tuesday, Oct. 18, 2022. (Mike Cabrey/MediaNews Group)

DOYLESTOWN >> Nina Mayro thought Central Bucks West was a bit too deferential to the past when Bucks lost to Souderton in the field hockey teams’ first meeting this season.

But in the rematch Tuesday night, West was ready to show its present form is good enough to better anyone it plays against.

A strong start for the Bucks paid off with Lily Cosner striking on a penalty corner in the first quarter while Mayro doubled the lead on another corner in the third. Eve Damsker added more cushion with her goal in the third as West gave itself a chance for a share of the Suburban One League Colonial Division title with a 3-0 victory over the visiting Indians at War Memorial Field.

“We knew based off past seasons they’d been top SOL for years and we had been bottom SOL for years so we kind of let the history get to us last game,” Mayro said. “But this game we finally realized, looking at our records and comparing it to their records, we had the skill to beat them, we could beat them. So we didn’t hesitate tonight.”

Central Bucks West’s Lily Cosner (6) readies to hit a shot that will go into the cage for a first-quarter goal against Souderton on Tuesday, Oct. 18, 2022. (Mike Cabrey/MediaNews Group)

Mayro, a junior verbally committed to Georgetown, picked up a pair of assists while goalkeeper Kendra Pitts and the West defense handed Souderton its first shutout loss since 2020 and denied Big Red from clinching the outright division championship. Instead, West (16-1-0, 14-1-0 SOL Colonial) can split the title crown with the Indians if the Bucks top Neshaminy on the road 3:30 p.m. Thursday.

“I think it proved to ourselves that we lost to them the first time that we can beat them and we’re ready for playoffs,” CB West senior captain Kendall Siegle said. “They’re a competitive team, that’s what we’re going to see in playoffs so I think it’s nice going into playoffs knowing that we can beat a team that’s higher up than us and really put everything out there.”

The Bucks, who have won 11 straight – the last four by shutout – since falling 4-3 to Souderton Sept. 13, are looking to earn the program’s first SOL title since taking the SOL Continental Conference outright title in 2015.

Despite the loss that snapped a five-game losing streak, Souderton (16-2-0, 15-1-0) is finishing atop the SOL Colonial – either alone or alongside West – for a second straight season after taking the title outright in 2020. It is also the third SOL title in four years for the Indians, who split the SOL Continental championship with Central Bucks East in 2019.

“We each got one,” said Souderton coach Sue Casciato of the regular-season split with the Bucks. “Like I said, it’s hard to repeat so I’m proud that we at least have a share of the title. But I give them credit they have a good team and they played better than we did tonight.”

Souderton struggled to create much offense in the first half yet trailed just 1-0 at the break. After Mayro’s goal off a Calista Boos assist made it 2-0 with 8:03 in the third, the Indians’ attack began to generate more opportunities on corners but could not get a ball past Pitts, who finished with 13 saves.

“I said to them, we could’ve been down a lot more than 1-0 at half so I said let’s try and turn things around a little bit,’” Casciato said. “So they definitely outplayed us in the first half. I feel like the second half was even or in our favor but you know, in the end, you have to score and we really struggled to do that. And they were able to finish much nicer than we did.”

Goalie Meredith DiMarzio had seven saves for Souderton, which came into Tuesday’s game fourth in the District 1-3A rankings but dropped down to six. Central Bucks was seventh and remained there. Top eight in the 24-team field receive a bye into the second round.

“We won’t face anybody better than this in districts, at least not the first couple rounds,” Casciato said.

The Bucks took a 1-0 lead at 5:27 in the opening quarter, passing around the top of the circle on the corner – Boos getting the ball to Mayro who then sent it over to the left side for Cosner who ripped a shot into the cage.

“Our corners have actually been looking a lot better towards the end of the season,” Siegle said. “We’ve scored off a couple which we get a lot so it’s really nice to know that we can score off of them.”

Souderton’s Ang Borisow (9) gets a stick on a shot by Central Bucks West’s Calista Boos (24) took block it during their game on Tuesday, Oct. 18, 2022. (Mike Cabrey/MediaNews Group)

Mayro made it a two-goal advantage on a corner in the third, the junior collected an initial effort towards the cage by Boos and proceeded to put her shot in at 8:03.

“It was a hit from Calista Boos from the short and I knew that it wasn’t going to have enough power,” Mayro said. “It was going straight towards the goalie and it didn’t have enough power to tip. So then I just stopped it and flicked it in.”

The Bucks struck for their third goal on a counterattack in the fourth, Damsker sweeping the ball into the cage off a Mayro assist with 7:55 remaining.

“The ball moves a lot faster than you can run it,” Mayro said. “And so just making sure quick off your stick, looking to the open girls cause they were all down at our circle. So just to make sure to run the ball faster than them I think that’s what got it to the end so fast.”