Ava Jones scores hat trick, Souderton gets back on track with win over Council Rock South 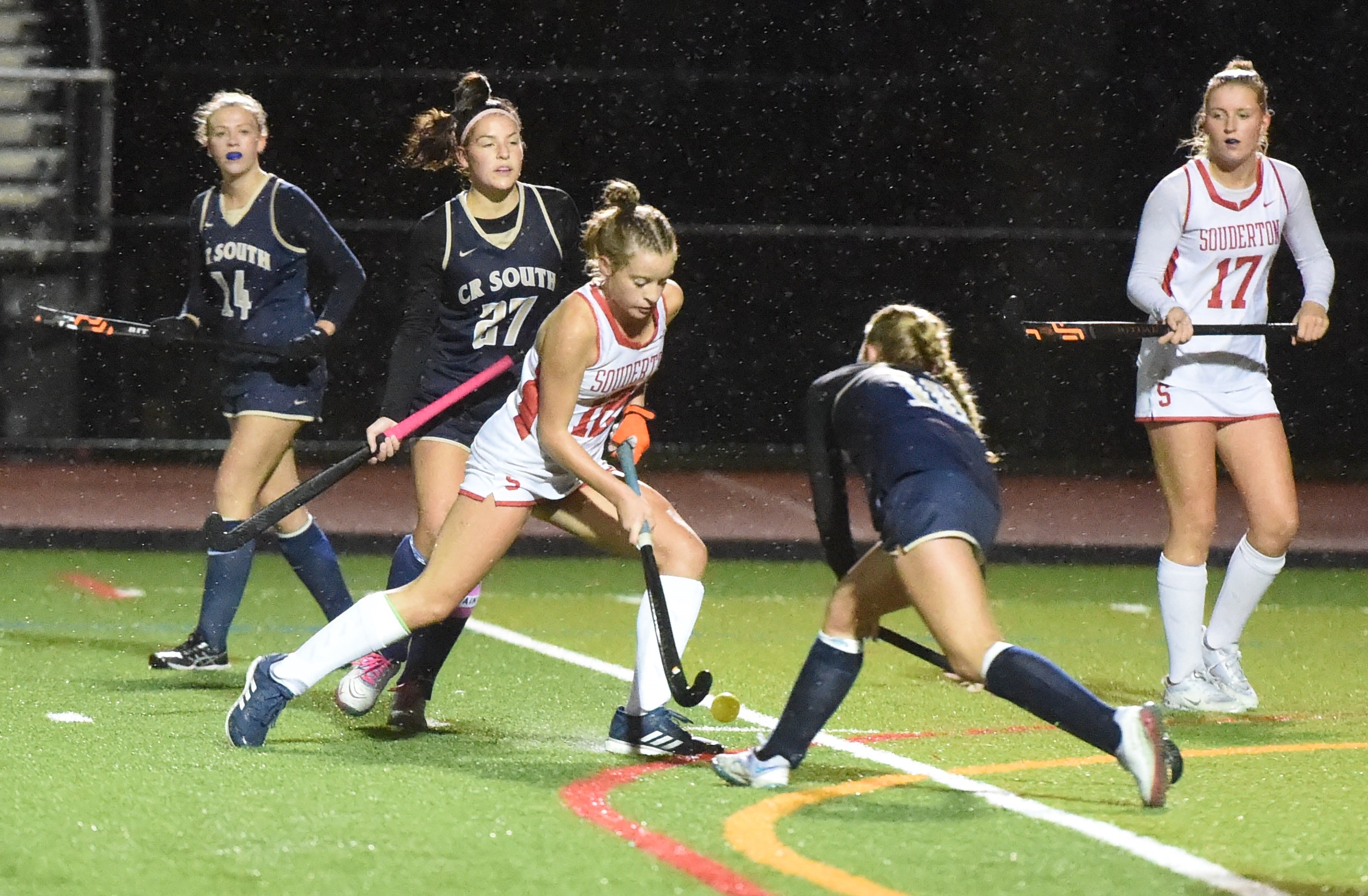 FRANCONIA >> It was a cold and wet night at Souderton Monday but that did little to bother Ava Jones.

“I love playing in the rain,” she said. “It’s so much more fun I feel like. I know it’s harder, it’s a challenge but we worked through it and we won.”

Jones collected a hat trick to do all the scoring for the Indians field hockey team as they hosted Council Rock South, the sophomore finding the back of the cage twice after halftime as Souderton bounced back from its first loss to earn a 3-1 Suburban One League crossover win over the Golden Hawks.

“I don’t even know – the turf’s a lot faster,” said Jones for her affinity for the inclement conditions. “And it’s just like you want to run around more cause you’re freezing cold.”

Souderton could not break through on a few corners in the opening quarter but Jones put Big Red ahead at 11:38 driving to the cage in the second quarter.

The margin remained 1-0 until early in the third when Jones scored off a corner then struck for her third less than two minutes into the fourth.

“I’m feeling good,” Jones said. “It was all about the passing and deflections, the goalies can’t save those.”

The Golden Hawks pulled to within 3-1 after Sarah Freeman’s goal off a corner with 9:59 left but Souderton (12-1-0, 11-0-0 SOL Colonial) held South off the rest of regulation to get back on track after last Saturday’s 4-3 overtime loss to Methacton.

“Nice to just get this one under our belt and kind of start fresh after like you said a tough loss to the other day,” Indians coach Sue Casciato said. “So we said try and get a new winning streak started tonight.”

Souderton outscored its first 11 opponents 57-8 but on the road against Methacton – which handed the Indians their only regular-season loss in 2021 – Big Red trailed 3-0 at halftime but rallied to pull level only for a Lily DeWan goal in the extra session to give the Warriors the win.

“When I went back and looked at the stats I was like we had more shots, we had more corners,” said Casciato of last Saturday’s nonleague matchup. “Sometimes I think you just need a reset, to say ‘Hey they’re a top five team in the district and we were down 3-0 we could’ve given up and lost 6-0 and we fought our way back to even.’ And we played the first four-and-a-half minutes of overtime one player down – we managed to hang in there.”

Two days later on its home turf, Souderton returned to its winning ways thanks to Jones’ three goals, the Indians completing their crossover games against the SOL Patriot Division by earning a 29th consecutive victory over Suburban One League sides.

“I think our connections off the field are really helping us,” Jones said. “We’re all friends off the field which is making us closer on the field and helps us passing and when we need to correct someone they listen and know they’re helping them and not yelling at them.”

Souderton finishes the regular season with five SOL Colonial games, starting with a visit to Central Bucks South 3:30 p.m. Friday. The Indians lead the division with 33 points, six ahead of second-place Central Bucks West, which had its game at Neshaminy Monday postponed.

“Everybody on any given day you have to be on your game,” said Casciato of the SOL Colonial. “And obviously we’re just a little bit ahead of West so that’ll be a big game, the final game of the season if we both can win until then. We just came away with a 4-3 win first time we played them (Sept. 13) so you can’t let down at this point.”

Council Rock South (6-6-0, 6-5-0 SOL Patriot) came into Monday having four of its previous five games – including its last three – go to overtime. The Golden Hawks try to snap a two-game losing streak at Bensalem in an SOL Patriot matchup 3:30 p.m. Wednesday.

Jones scored Monday’s opening tally off a feed from Hannah Cornes, Jones charging into the circle just ahead of a defender then touching the ball around the goalkeeper to slide it into the cage at 11:38 in the second quarter.

“It was just passing in the beginning,” Jones said. “I got it then you pull around all the defenders and the goalie and score.”

The Indians doubled their advantage on a corner in the third, Lauren Frye connecting on a ball that Jones got a stick on to redirect it in at 10:20.

“We just knew we needed to get the deflection off,” Jones said. “I took a different route and I got it in.”

Jones completed her hat trick to put Big up 3-0 by finding the back of the cage at 13:29 in the fourth.

“She’s a hard worker, plays with a lot of intensity,” said Casciato of Jones, an All-SOL Colonial second team selection at midfield as a freshman last season. “And I don’t know if you noticed at the end of the game she works really hard to get her teammates involved. She dishes the ball a lot when she could probably take ‘em one-on-one she’s like, ‘Hey we’re up three, I’m trying to get somebody else involved.’ So I really appreciate that.

“She had some skill last year but this year she’s really just kind of really stepped into more of a leadership role and just matured into a really solid player.”

CR South denied Souderton a shutout as the Golden Hawks converted on a corner, Freeman redirecting a ball sent towards the cage by Breanna Gable at 9:59.