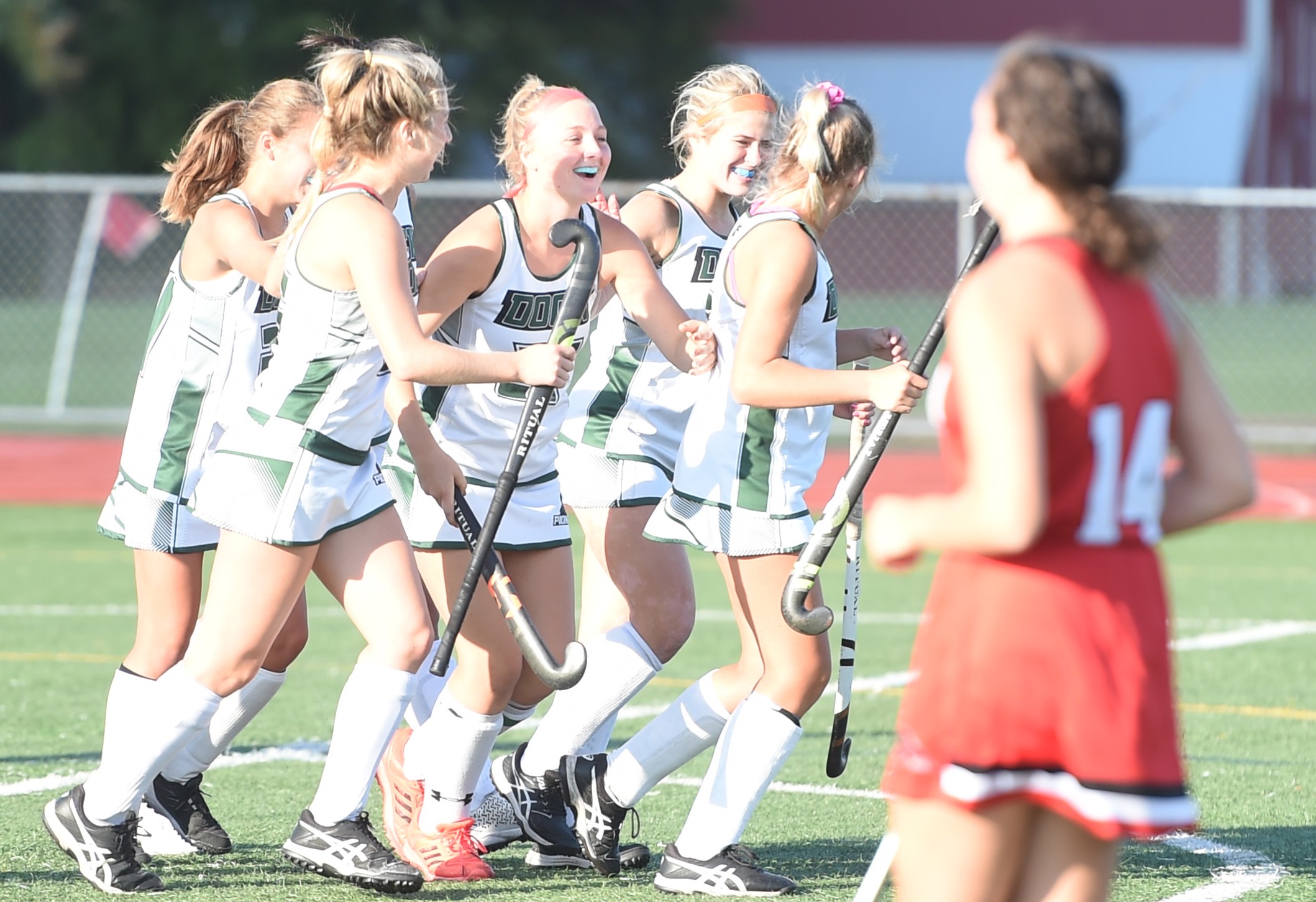 Dock Mennonite's Ainsley Moyer (21) and teammates celebrate after Moyer's goal in the second quarter against Plumstead Christian during their game on Tuesday, Sept. 27, 2022. (Mike Cabrey/MediaNews Group)

TOWAMENCIN >> Ainsley Moyer could not contain her elation – or her relief – when the ball found its way into the cage.

“I was so excited,” the Dock Mennonite field hockey senior said. “Actually when I scored the goal I yelled, ‘Finally,’ because last year I had scored a lot earlier in the season so it was a little frustrating.”

Moyer ripped a shot in from the top of the circle on a penalty corner, registering her first goal of the year while also extending the Pioneers’ lead to 3-0 over Plumstead Christian in the second quarter Tuesday afternoon.

“That was like one of the best corners you can get,” Moyer said. “Just insert and right in. And that’s my favorite kind.”

Dock scored twice more before halftime, pulling away from the visiting Panthers with a four-goal second quarter as the Pioneers rolled to a 5-0 Bicentennial Athletic League victory.

“We wanted to come out and play well as a team,” Dock senior Celeste Derstine said. “We wanted to make sure we were focusing on our passing, using our dribble well, looking up – working as a team. We also wanted to put the game away early and make sure we can get all the players in, including the JV.”

Five different players finished with a goal for Dock Mennonite, Derstine and Olivia Zaskoda each collecting a goal and an assist as the Pioneers (9-3-0, 8-0-0 BAL) bounced back from a nonleague 3-2 loss to Villa Joseph Marie last Friday to earn the regular-season sweep of the Panthers, who Dock beat 6-0 Sept. 2.

“It depends on the game, sometimes we have games where the same couple people score and then the next game it’ll be a couple different people,” Moyer said. “So it’s here and there but we have a lot of great girls who can get it in.”

Derstine had a hand in Dock’s first two goals, assisting on Zaskoda’s strike on a corner for the lone goal of the opening quarter before doubling the host’s advantage by converting a penalty stroke at 8:24 in the second quarter.

“I always practice them, I practice them a lot, especially in the indoor season,” Derstine said. “I always shoot to the same spot and I always make sure I don’t look where I’m shooting.”

Moyer added Dock’s third off a corner insert from Zaskoda while Eden Schrag and Sadie Bernd each proceeded to put a ball into the cage, stretching the lead to five at the break.

“I think we just kind of came out slow and then we just took a breath,” said Moyer of the Pioneers’ four-goal second. “Kind of assessed what we need to do and we came out strong and we came out more energetic and ready to play. And ready to score – had some strategy that we talked about.”

As for taking a while to break into the scoring column in 2022, Moyer says it mostly had  to do with a little bit of bad luck.

“It’s been close calls or just it’ll hit someone else’s stick or it’ll be right off the cage,” she said.

Dock earned its first PIAA appearance since 2016 last season when it reached the District 1-1A final, the Pioneers topping Archbishop Wood in the first round of states before falling to Wyoming Area in the quarterfinals.

“We are definitely playing to get to states again,” Moyer said. “It was a great opportunity to be able to play in states last year. We definitely did not have the season we thought we were going to have last year, we thought it was going to be a rebuilding year and it (was) just we came strong, we came ready to play and it took us far.”

Dock Mennonite sits third in the District 1-1A rankings behind No. 1 New Hope-Solebury – which has won the past five district titles – and No. 2 Villa Joseph Marie. The Pioneers host No. 5 Jenkintown for Senior Night 7 p.m. Thursday. Plumstead Christian (4-6-0, 3-3-0) visits Faith Christian 3:45 p.m. Thursday.

“We definitely have expectations where we want to get to and what we want to do,” Dock coach Michelle Waldspurger said. “We’ve applied more pressure to them as well but we are an experienced team now, we’ve been there, now we want to finish.”

The Pioneers grabbed a 1-0 lead on a corner in the fourth minute of the first quarter. Derstine received the insert pass from Zaskoda at the top of the circle and sent the ball toward the left post where Zaskoda got a stick on it, sending it into the cage.

Dock earned a penalty stroke after a corner and Derstine lifted it in for a 2-0 lead at 8:24 in the second quarter. After Moyer’s tally on another corner, Schrag pushed the margin to four with a goal in front at 4:42.

“We had more people in the circle, we had key players on the goalpost which is really helpful,” Derstine said. “And we just overall instead of doing passes to each other in the circle we just hit it on goal as much as we could.”

The Pioneers went up 5-0 with 1:09 left before halftime when Bernd put a ball in at the left post after a Tiffany Opanski shot.