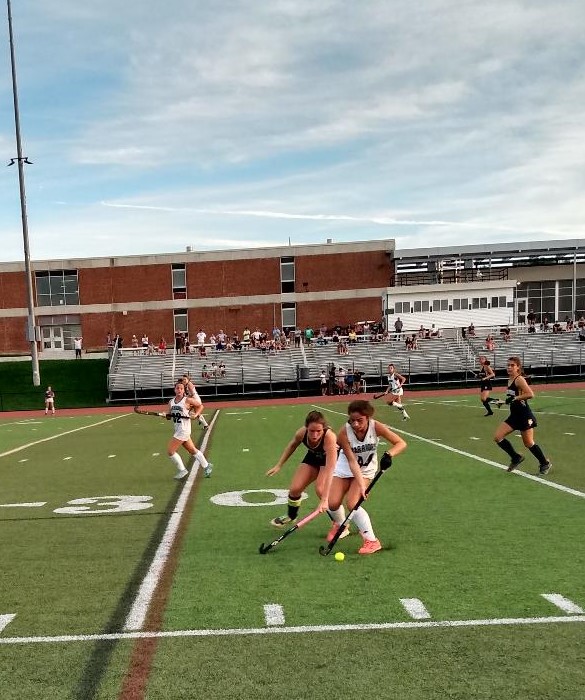 FAIRVIEW VILLAGE >> The Methacton field hockey team has had a freshman player or two step right into the starting lineup and spotlight the last few seasons.

And Ceci Rehak has continued that tradition this year by making an immediate impact for the Warriors. She scored both of her team’s goals on Wednesday afternoon at Warrior Stadium as Methacton won a battle of Pioneer Athletic Conference division leaders against Upper Perkiomen, 2-1.

Rehak scored in the first and second quarters, with assists going to Avery Schwartz and Carmelo Maro, to keep the Liberty Division leader Warriors (7-0 PAC, 10-1) undefeated in league play. Sarah Steinman scored in the third quarter for the Frontier leading Indians (5-2, 7-3).

“We’ve had it happen every year since I’ve been here,” Methacton coach Amanda Parrezzi said. “At least one freshman and this is my fourth year. A lot of our girls continue to play club for us. A lot of them come in with fundamental skills. We add to them and teach them team concepts.”

“It’s been an adjustment from middle school to here,” Rehak said. “I think it’s the skill level and just how much more of a unit we are. And playing with the older girls. They have so much experience. But I play club at PowerHouse and I play with a lot of older girls there.”

Rehak scored with 8:42 remaining in the opening quarter when she knocked a high pass from Schwartz down into the open right corner of the cage. Then she scored again with 11:49 to go until the half on a pass out in front from Maro.

“I think we were just keeping our communication up,” Rehak said concerning the Warriors’ success in the first half. “It’s just knowing your position, knowing where to go.”

Upper Perk picked up the attack right from the beginning of the second half and Steinman scored just 2:05 into the third quarter. And when the Indians were not on the attack, goalkeeper Emma Lajeunesse kept them in the match with 10 second-half saves.

“I felt like we adjusted so we could defend better with the ball in the backfield so we could come up with some interceptions,” Upper Perk coach Jamie Warren said. “We had some runs. We just had to finish on the runs. The bigger schools have more depth than we do. I felt we did well with the players we had on the field today.”

The Warriors’ defense held fast when necessary and the game came down to one last possession for the Indians, who called a timeout with 18 seconds left with the ball in their own half of the field. But Rehak intercepted a pass and dribbled down the left sideline and into the corner to run out the clock.

“We do try really hard to play team defense,” Parrezzi said. “Everyone is set and ready for every free hit and we try to counter attack. Our strength is passing and feeding on the move. From the day we announced rosters in training camp, our mindset was putting the team first.”

Emily Drake made three saves in goal for Methacton in the first half, Natalie Drake had five saves for the Warriors in the second and Lajeunesse finished with a total of 13.  Methacton had a 5-2 advantage in corners in the first half and a 10-7 margin for the game.

Though this was the only regular season meeting between the two teams, they might well see each other again in the PAC playoffs. Last year, the Warriors made it to the Final Four and were eliminated by Boyertown in the semifinals and Upper Perk won its third straight championship.

“They are definitely our competition,” Warren said. “We have to tighten up and work on our game plan.”