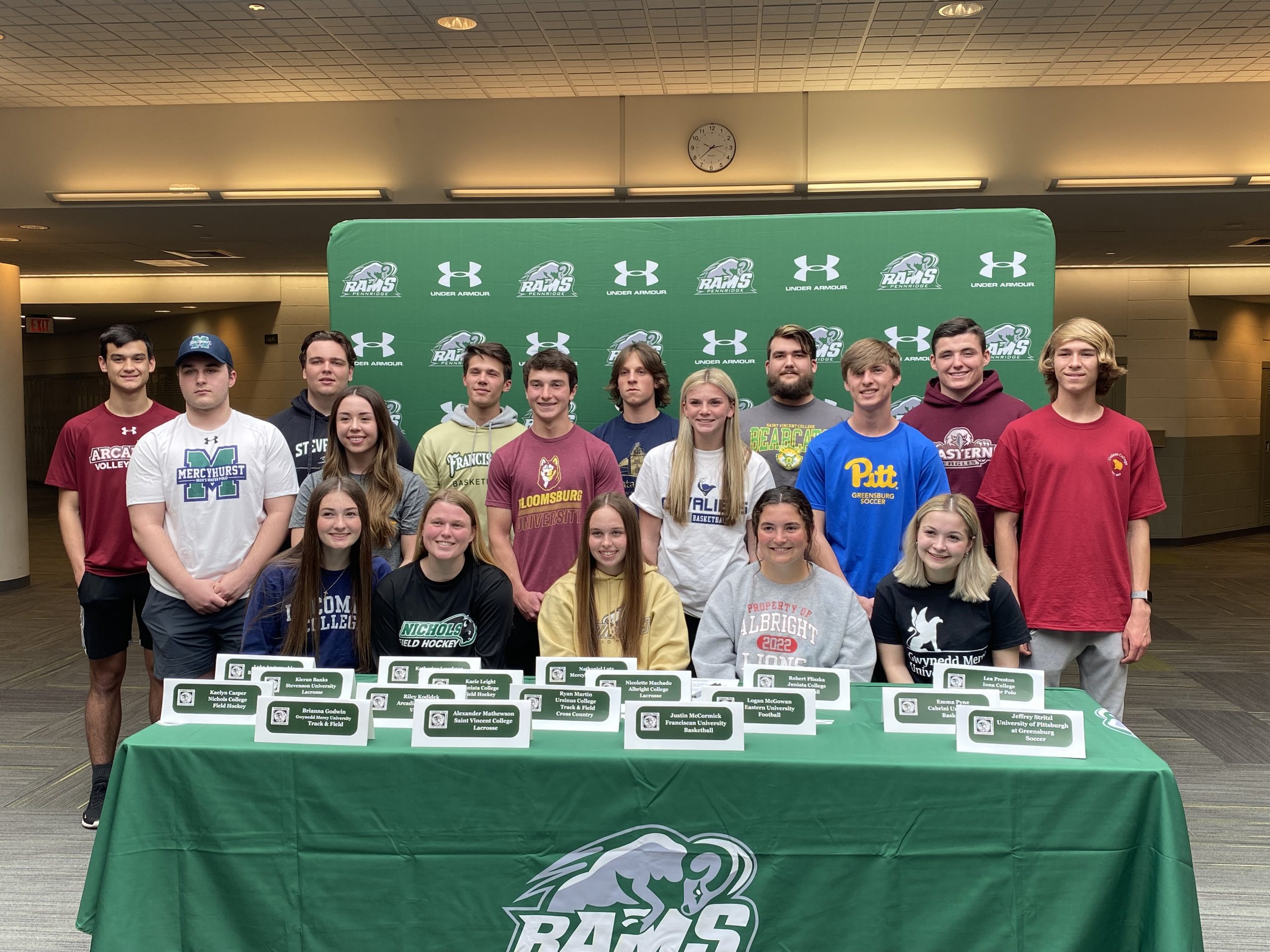 EAST ROCKHILL >> Joining a program from the start is something Pennridge’s Logan McGowan found appealing about Eastern University football.

“I’m really excited for it cause there’s no upperclassmen, we make the team how we want it,” McGowan said. “Brand new facilities, brand new equipment, everything’s brand new.”

The St. Davids school is adding the sport for the fall of 2022 with the Eagles set to compete in the Middle Atlantic Conference the next year.

“(Pennridge) Coach (Cody) Muller came to me and told me about it first,” said McGowan, an All-SOL National Conference honorable mention linebacker last season. “And then their head coach (Billy Crocker) came to the school and I really liked him, he’s from Villanova.”

Monday afternoon, McGowan was one of the 17 Pennridge student-athletes from a number of sports being honored for their college commitments.

“I love being around such good athletes,” boys lacrosse’s Alex Mathewson said. “Kind of shows we’re all connected in some sort of way and we all have the same goal but we’re all going about it in a different way.”

Mathewson was one of two members of the school’s boys lacrosse team recognized, the defender heading to Saint Vincent College in Latrobe with goaltender Kieran Bankers set to attend Stevenson University in Maryland.

“They picked me for how big I was and for how good I was on the field and it looks like I’ll be a perfect fit for them,” Mathewson said.

Banks, an All-SOL National Conference second-team selection in 2021, plans to major in business while Mathewson is looking at biochemistry.

“I knew the coach for a while she coached at Gwynedd (Mercy) and I was like ‘Oh I want to go to Gwynedd cause I love this coach, I’ve known her for so long.’” Casper said. “And she ended up moving to work on the program there and she reached out to me through showcases and then I just started to there and looked at school and ended up loving it.”

Casper said she looked at a few schools in Pennsylvania but ultimately found the right fit north of the Connecticut border with the Bison. She plans to major in sports management.

“I was looking close but I just didn’t love any of those schools so I was like I’ll look up there,” she said. “And I love it there. It’s so nice.”

Loughran is looking to major in elementary education at Lycoming while Leight had an eye on majoring in business.

The Rams track and field teams also had three honored for their commitments. On the boys side, Luke Austermehle will attend Bloomsburg and Ryan Martin is heading to Ursinus while for the girls squad Bri Godwin is going to Gwynedd Mercy.

Godwin, a pole vaulter, plans to be a psychology major. Sprinter Austermehle looks to major in marketing with Martin, who runs distance and also will compete in cross country, is interested in biochemistry and molecular biology.

Both Lea Preston and Nate Lutz will play water polo on the college level with Preston going to Division I Iona College and Lutz heading out to Erie and Mercyhurst University.

“When I visited them I fell in love with the program,” said Preston of Iona. “The coach is awesome, the girls are all very sweet and it’s a great location, it’s super close to the city.”

Preston was an all-state selection the past two seasons, earning first-team honors last year after making the second team as a junior. She’s looking to major in business.

“After my sophomore year my coach was like you can pretty much go to a lot of programs if you thought you were interested in,” Preston said. “So that’s when I started looking.”

Lutz, who is interested in finance and business, was considering Gannon, Washington and Jefferson and Mount St. Mary’s before deciding on the Lakers.

Justin McCormick found his next school a bit west in Ohio and he will continue his basketball career at Franciscan University of Steubenville.

“I knew some people that went there, I have a friend that I kind of grew up with that’s on the team,” McCormick said. “So honestly wasn’t even thinking about them at the beginning of looking at college and then it just kind of ended up being the place I wanted to go.”

The shooting guard thought about attending Grove City College, Immaculata and Saint Vincent but opted for Franciscan, which has its campus by the Ohio River. He is looking to major in communications.

“I decided junior year I wanted to keep playing,” McCormick said. “And I just was sending out emails to coaches all the time so it feels good to see that hard work pay off.”

Girls lacrosse’s Nicolette Machado is heading to Albright College and looks to major in biochemistry. Her older sister Alexa also plays lacrosse in college as a goaltender at Ursinus.

“It’s a very competitive family but we just always have been active,” she said. “I have an older sister who also goes to college but we always loved playing outside together. And my older sister who played at Ursinus as a goalie she just really helped me fall in love with the sport.”

Boys Soccer’s Jeff Stritzl, an All-SOL Colonial Division second team selection at defender as a senior, committed to the University of Pittsburgh-Greensburg. He is interested in majoring in secondary education.

“Jeff is strong, fast and does not shy away from physical play,” Pennridge boys soccer coach Pete Valimont said. “Jeff played outside back for us and was an absolute stud his senior year. His ability to see the field in front of him is second to none and he would direct players where to go which allowed him to contribute multiple assists from his defensive position.”

Robbie Pliszka committed to Juniata for baseball after considering Centenary University and Eastern. He is aiming to major in business.