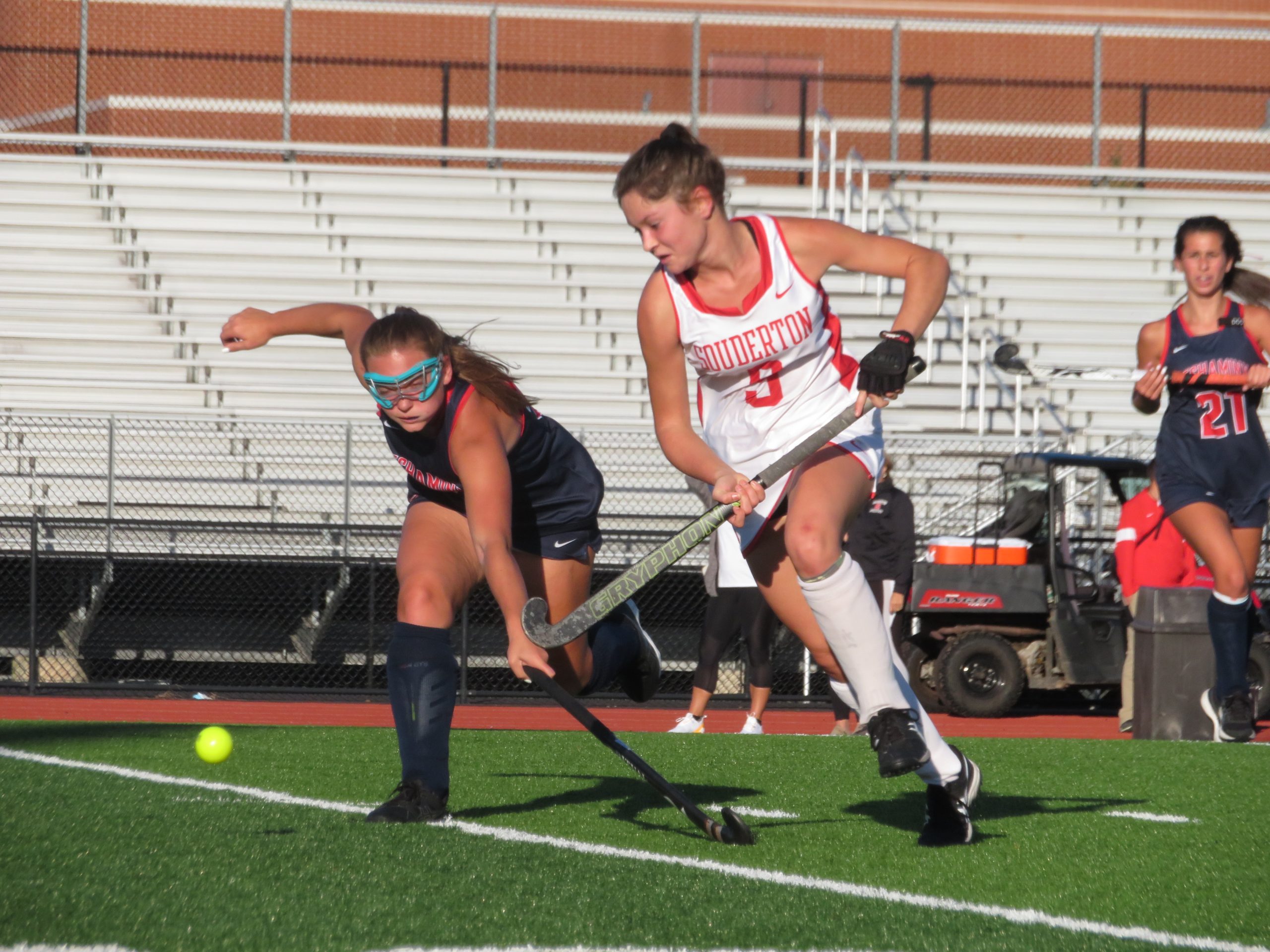 The Gwynedd Mercy field hockey team reached its first PIAA championship game since 1996 and the Monarchs’ run the 2A final – which included them winning the District 1-2A title – earned them an area-best three players on the 2021 The Reporter/Times Herald/Montgomery Media Field All-Area First Team.

The all-area first team is headed by Player of the Year Alaina McVeigh of Gwynedd Mercy. The senior Duke commit was an offensive force this season, tallying a school-record 71 goals and also handing out 25 assists as GMA went 20-3-1. Joining McVeigh are fellow Monarchs Sydney Mandato and goalkeeper Lilly Sweeney, both juniors.

Mandato – who scored twice in the state quarterfinal win over Palmyra – and McVeigh were part of a GMA attack that totaled 164 goals over 24 games. Sweeney, meanwhile, helped the Monarchs allow just 1.3 goals per game.

“I think Sydney Mandato, she had a really great season too and she scored a lot of goals,” McVeigh said. “I feel like me and her were able to find each other a lot. That was like kind of how a lot were scored, like me to her or her to me.”

PIAA Class 3A tournament qualifiers Souderton and Methacton each had two selections to the all-area first team – senior Lauren Kenah and junior Ang Borisow for the SOL Colonial Division champ Indians while defenders senior Kristen Riddell and junior Elise DeWan made the team from Methacton, which reached the state quarterfinals.

Alaina McVeigh, Sr., Midfield, Gwynedd Mercy >> The 2021 Player of the Year, McVeigh smashed her own school record for goals in a season (43) by scoring 71 times – 16 coming in the postseason as GMA won the District 1-2A title and reached the state final. The Duke commit also collected 25 assists.

Sydney Mandato, Jr., Forward, Gwynedd Mercy >> The Penn commit was another talented player in the Monarchs’ offensive attack that scored 164 goals in 24 games (6.8 per game). Mandato had 11 goals in the district and PIAA playoffs including both goals as GMA topped defending state 2A champ Palmyra 2-1 in the PIAA quarterfinals.

Lauren Kenah, Sr., Forward, Souderton >> Kenah’s 28 goals and 17 assists helped Souderton finished 20-3-0, claim the SOL Colonial Division title with a perfect 16-0-0 mark and qualify for the PIAA-3A tournament for the third time in four seasons. The three-time All-SOL selection (first team Colonial the past two years) is heading to play in college at the University of Virginia.

Elise DeWan, Jr., Defense, Methacton >> A first-team All-PAC Liberty Division pick, DeWan was a key player in a Methacton defense that gave up 1.2 goals per contest as the Warriors finished 18-7, took first place in the PAC Liberty, reached the District 1-3A semifinals and made the PIAA-3A quarterfinals.

Olivia Zaskoda, Jr., Midfield, Dock Mennonite >> The Co-MVP of the Bicentennial Athletic League led the Pioneers in goals with 22, including the first in Dock’s 2-0 win over Archbishop Wood in the PIAA-1A first round. Zaskoda also finished with 13 assists in earning All-BAL first team after being a second-team pick as a sophomore.

Maddie Waldspurger, Sr., Midfield, North Penn >> Waldspurger earned her third straight SOL all-league first team selection – the last two in the SOL Colonial Division – as the Saint Francis University commit lead North Penn in assists (21) and was second in goals (17) as the Knights went 13-6-1 and reached the District 1-3A second round.

Brynne Miller, Sr., Midfield, Wissahickon >> Miller, a Rider University commit, was named to the All SOL Liberty Division first team pick for the second straight season – she was also All-SOL American Conference second team as a sophomore – as she scored 14 goals and dished out 17 assists for a Trojans side went undefeated in winning the SOL Liberty and finished 18-4-0.

Sienna Golden, So., Forward, Archbishop Carroll >> The Philadelphia Catholic League first team selection pace Carroll in both goals (30) and assists (17) as the Patriots won the PCL and District 12-2A titles and advances to the state 2A quarterfinals.

Lilly Sweeney, Jr., Goalkeeper, Gwynedd Mercy >> Junior cageminder teamed up with a GMA defense that posted six shutouts – two in the District 1-2A playoffs – and allowed 1.3 goals per game in 24 games. Made nine saves in the PIAA-2A final against Twin Valley and also stopped six shots in the win over Villa Maria in the District 1-2A final.