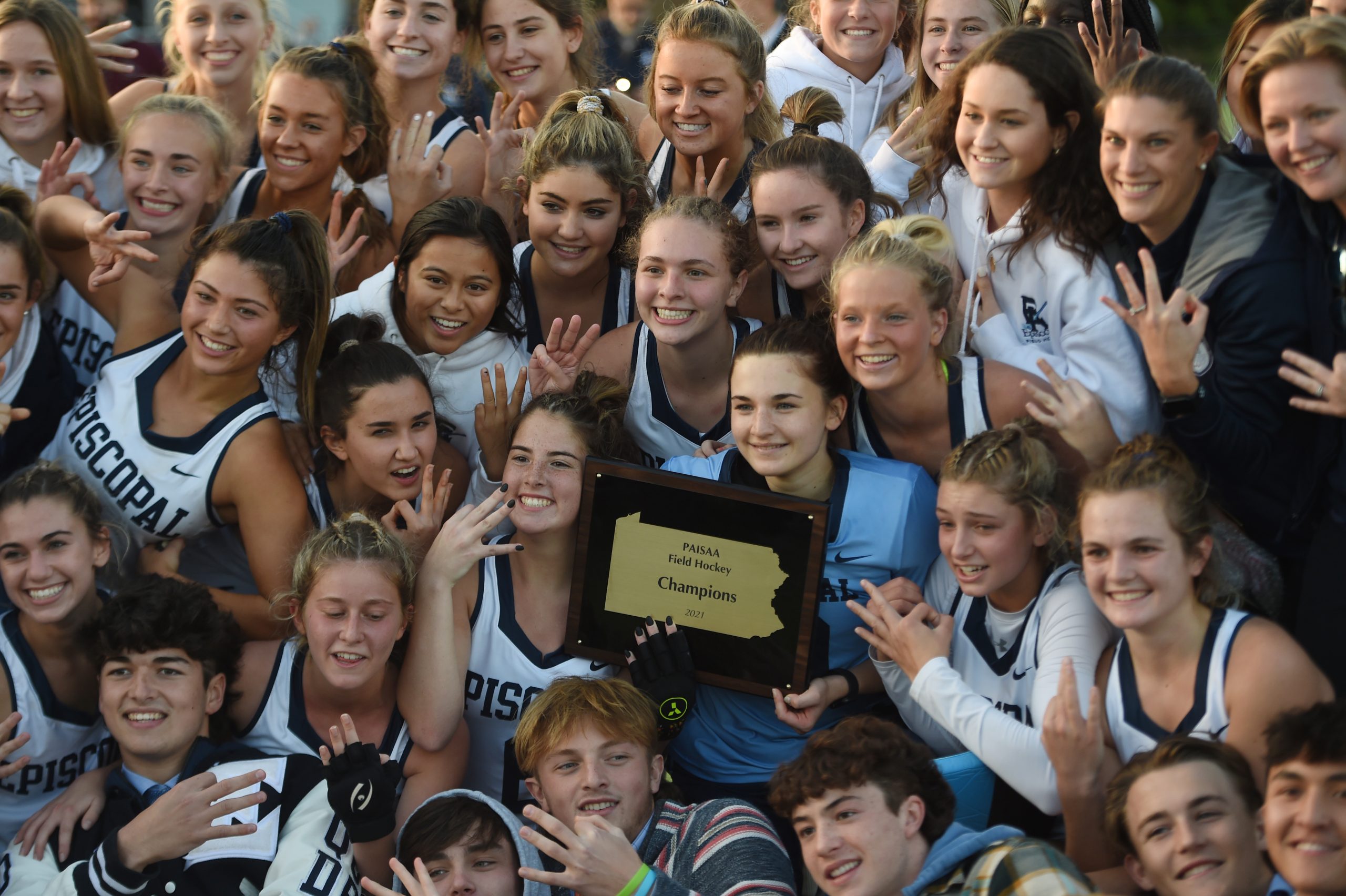 CONSHOHOCKEN >> Two years removed from an epic championship showdown, the Hill School and Episcopal Academy field hockey teams met up once again Wednesday afternoon at the Proving Grounds with the Pennsylvania Independent Schools Athletic Association title on the line.

The encore proved an even better finish, but the result stayed the same.

Senior Ashley Sessa’s goal in the final minute off an assist from classmate Mia Garber delivered Episcopal Academy a 3-2 win over Hill School for the Churchwomen’s third straight PAISAA championship.

“Mia had a really good interception off the goalie and a pass, and then I just got it and saw the opening where the goalie wasn’t set,” Sessa said.

“Last time it was 4-3, so it was great game against Hill again,” added Sessa, who is a Schwenksville native and member of the U.S, women’s national team. “It was kind of the same situation. We were tied half the time and it was a battle between two great teams, but we came out on top.”

Episcopal seniors Macy Szukics, who scored a pair of goals, and Gianna Cilluffo, who made six saves, were part of all three championships during their time at the school, defeating Germantown Academy 4-3 in a penalty shootout in 2018 and taking down Hill 4-3 in 2019.

“Macy and I, I think we’ve lost three games our entire high school career,” Cilluffo said. “It’s an honor to be a part of such a winning, successful program.”

“It’s a great accomplishment for the whole team in general,” Szukics said. “We’re really, really happy with the outcome and how everyone performed, and it’s so cool to win three times.”

Szukics scored two goals for EA (19-1) in the second quarter — both rebounds on corner attempts — for  a 2-1 lead after Hill (17-2) freshman Riley Savage put the Churchwomen in a hole 30 seconds into the game off an assist from freshman Aubrey Turner.

Hill ties it 2-2 with less than six minutes left. pic.twitter.com/hraGLMBo0L

2-1 lead for EA after second goal on a corner in Q2. pic.twitter.com/qIlrl6Gl0i

EA held the lead for about 27 minutes of play, but Savage tied the score 2-2 with 5:18 remaining in the game off an assist from junior Emilie Kirschner.

“Our team is tough,” Hill coach Jen Weissbach said. “We played tough, and we’ve been battle-tested the entire season. We’ve played seven of the top 25 teams in the country and never shied away from competition. We were ready for this moment. We knew we had it in us to come back and tie it up, and we just couldn’t close it out in the last minute.”

The Churchwomen responded to the Hill score by earning four corners in the game’s final minutes. Hill junior goalie Hala Silverstein (five saves) turned away several shots down the stretch, and senior Nicole Moran made a tremendous defensive save to keep the game tied.

EA broke through with 50 seconds left when Charlotte Bruder passed the ball to Garber inside the circle, and Garber made a short pass to Sessa to set up a backhander for the game-winner.

“When I received the ball, I saw there was a defender coming toward me, and I saw Ash,” Garber said. “I didn’t really have room for a shot, and I didn’t know what the time was, but I knew we didn’t have a lot of time, so I just tried to get it to Sess and she got the shot off.”

EA ranked No. 3 and Hill No. 4 in the most recent MAX Field Hockey national rankings. Hill School’s only two losses this season came against Episcopal Academy, falling 3-0 on Sept. 17

Weissbach’s team went on a 13-game win streak following the loss that included Top 25 wins over No. 24 Garrison Forest School, No. 11 Kinkaid School, No. 15 West Essex, No. 13 Oak Knoll School and No. 7 Wyoming Seminary and a third straight Mid-Atlantic Prep League championship.

Hill seniors Rease Coleman (Cornell), Madison Orsi (Virginia) and Hayley Gable (Kent State) helped Hill break through to its first PAISAA title game in 2019 and got their team on the doorstep of a state championship once again in their final year.

“This senior class is special,” Weissbach said. “I owe them a lot of gratitude for building HFHF (Hill Field Hockey Family) to what it is. We owe them a lot, and many of them are going on to continue their careers in college, and we’ll be following them closely.”

EA ties it 1-1 on the corner early in Q2. pic.twitter.com/0PeFlqqb1E

EA went 6-0 during a COVID-19 impacted 2020 season, but did not get the chance to defend its 2019 title with no postseason taking place.

“It definitely feels good because we are seniors,” Garber said. “It was a missed feeling. It feels good to finally be back and get to claim our championship.”

NOTES >> Garber and Szukics highlighted the play of sophomores Grace Murphy and Kylie Gallagher in the win, also noting it was a complete team effort. “If I could talk about everyone on the field I would,” Szukics said. … Orsi and Kerry Elliot both had defensive saves for Hill. Elliott’s save out of the air was arguably the highlight play of the day aside from the game-winner. … The PAISAA title was the first for second-year coach Stephanie Fee after taking over for legendary coach Gina Buggy.