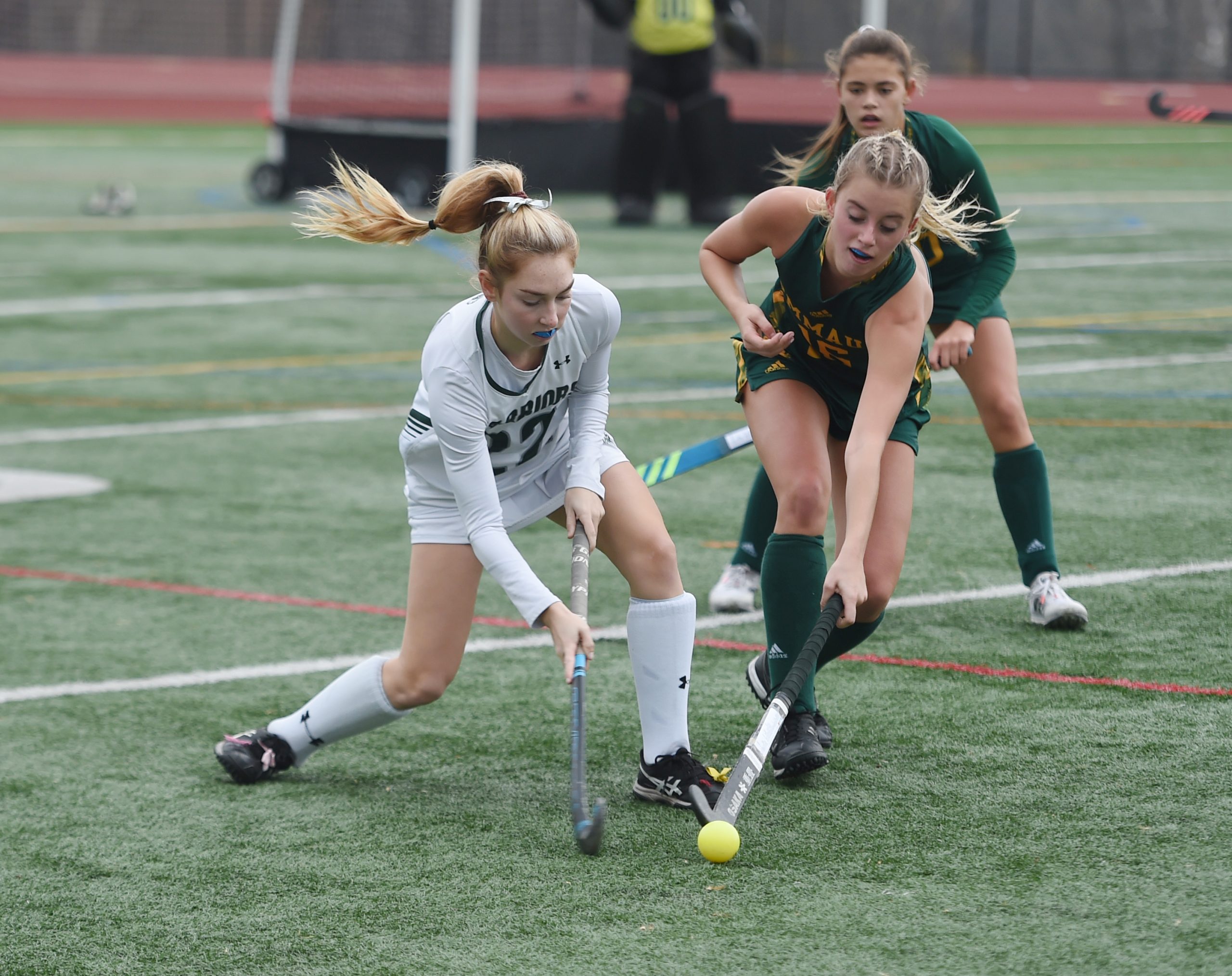 EXETER >> The tears in some players’ eyes as they walked off the field were understandable. The smiles on others as they gave one final hug were just as well-deserved.

Facing an undefeated Emmaus squad ranked No. 1 in the country by MAX Field Hockey in Saturday’s PIAA Class 3A quarterfinal, the Methacton field hockey team proved it truly can play with anyone.

The Warriors (18-7) went toe-to-toe with the reigning state champions, but ultimately fell just short in a 2-1 loss to the Green Hornets (26-0), who will go on to play District 1 champ Conestoga — a 2-1 winner over Cumberland Valley — in the state semifinals on Tuesday.

“We knew we had literally nothing to lose,” said Methacton senior Madison Noh, who scored her team’s only goal. “A lot of people won’t be playing in college next year, so we all knew we had to go out and play for ourselves.

“I really wish we got one more goal in or another five minutes just to enjoy the lost moments we have together as a teammate, but I am super proud of how this team’s played and even throughout the season we ultimately killed it.”

After a scoreless first quarter in which Methacton goalie Gabby DiPrinzio made two sensational stops, Emmaus demonstrated its prowess early in the second quarter.

Junior Abby Burnett, a University of Michigan recruit, scored two goals in fewer than two minutes, notching the first at the 12:12 mark off an assist from junior Rachel Herbine, a University of Iowa recruit, before an unassisted score with 10:37 left in the first half.

That stretch could have proved too much to bounce back from against an Emmaus squad outsourcing opponents 205-5 this season, but the Warriors regrouped and locked in the rest of the way.

“Our whole mindset was to work for each other and play for each other,” Noh said. “And I think our coach (Amanda Fuertsch) really kept us in that game.’”

“During the third quarter, our coach just said, ‘Go out and play your hardest,’” Methacton senior Kristen Riddell said.

Methacton goalie Gabby DiPrinzio, center, makes a kick save against Emmaus on Saturday in a PIAA Class 3A playoff game at Exeter. (Owen McCue – MediaNews Group)

Riddell and junior Elise DeWan on the backline and Noh, senior Elena Snodgrass and sophomores Lily DeWan and Renee Blake in the midfield along with several others led the defensive effort to keep Emmaus scoreless through the final 40 and half minutes of play.

DiPrinzio, who made six saves, stood on her head in the cage to prevent the lead from stretching larger than two and hold a team averaging nearly eight goals per game to just two scores.

“The past couple games Gabby has just been playing out of her mind,” Fuertsch said. “The saves that she’s making, she’s diving and getting right back up. Just to know that you have a goalie back there that’s giving everything that they have makes your defense feel a lot more comfortable when the other team is attacking in your circle.”

After knocking on the door several times before being denied by Green Hornets’ junior goalie Emma Cari (five saves), Methacton finally broke through for its first goal when Noh scored with 12:10 left to play.

The Warriors continued to pressure the Emmaus cage, even earning four-straight corners near the midpoint of the fourth, but the comeback attempt was stifled, ending their season.

“Best team in the country, we only lost by one,” Riddell said. “It shows how much we worked during the season, how much we wanted to win. It sucks that we lost, sucks that it’s our last game, but I couldn’t be prouder of our team, and that’s all I could ask for.”

“Playing the opponent we were playing, we could have walked into this game and been back on our heels and hesitant, like ‘Ooh what are they gonna do,’ but they weren’t,” Fuertsch said. “But they weren’t, which shows first off how much we’ve improved all season long and then how when we play our game we are successful.”

Methacton celebrates on its way back down the field following a fourth-quarter goal by Madison Noh against Emmaus on Saturday in a PIAA Class 3A playoff game at Exeter. (Owen McCue – MediaNews Group)

Methacton’s Elise DeWan make a pass against Emmaus on Saturday in a PIAA Class 3A playoff game at Exeter. (Owen McCue – MediaNews Group)

This Warriors’ group is no stranger to heartbreaking defeat, seeing their season end in overtime in last year’s District 1 semifinals, falling in overtime in the Pioneer Athletic Conference semis earlier this season, and exiting this year’s district semifinals in a penalty shootout.

“I think it meant a lot, especially for the program,” Noh said. “I’m excited to see where it will go. With the underclassmen we have now, I think it will go just up.”

They are a group Fuertsch will be sad to see leave, but also one she hopes have set the standard for her program.

“I think the culture is starting to shift where we’re starting to believe, ‘Hey, we’re the team that other teams need to adapt to,’ and I think it’s just a really good atmosphere to have,” the Methacton third-year coach said.

“Those sophomores (now seniors) got a glimpse of it when they were freshmen and then each year they’ve kind of bit away at it. To see them get to this point, and be successful in this game, I’m just incredibly proud of the mindset change that’s come across the whole program over the last three years that I’ve been here.”

Methacton players stand in their own goal waiting to defend an Emmaus corner Saturday in a PIAA Class 3A playoff game at Exeter. (Owen McCue – MediaNews Group)