Conestoga slips past Cumberland Valley to advance to PIAA semis 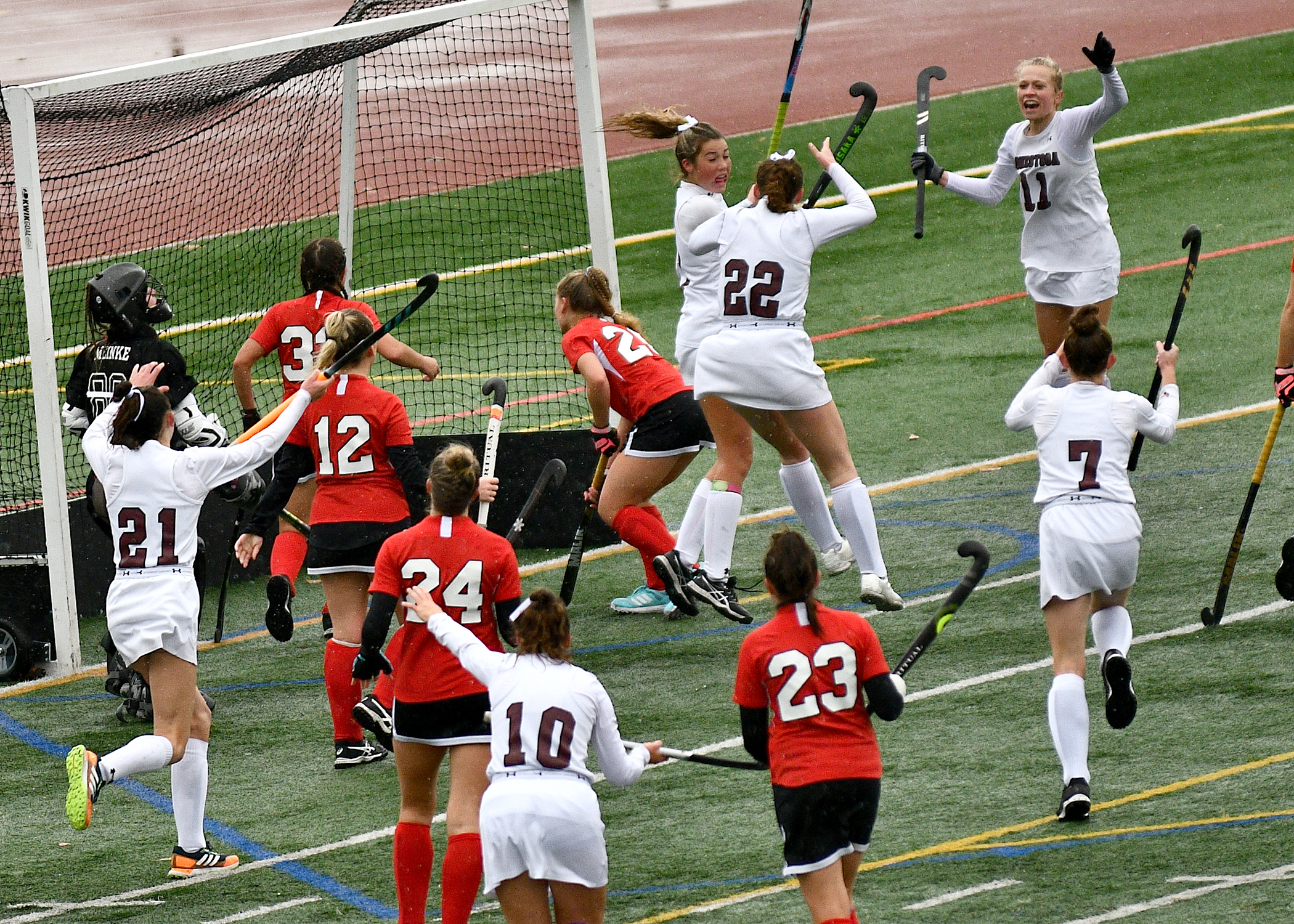 EXETER TWP >> It’s doubtful even ducks would have enjoyed the weather conditions for Saturday morning’s PIAA 3A quarterfinal between Conestoga and Cumberland Valley. It was cold, and it was rainy, with hard downpours turned sideways by heavy wind gusts. The misery of trying to play field hockey in those conditions is quickly erased, though, when, in the end, you come away with a victory that takes you further in the postseason than your program has seen in decades.

Tied midway through the final period, the Pioneers (21-1) got a goal from Ashlyn Carey, then held on for a 2-1 victory over the Eagles (16-5).  With the win, Conestoga advances to Tuesday’s semifinal where they will face District 11 champion Emmaus, a 2-1 winner over Methacton in the first game of the day, at Central Bucks West HS at 6 p.m.
“I knew when I had a shot I had to put it in,” said Carey. “None of us wanted to be going to overtime. “It’s an amazing feeling to know we are one win away from a state final. We’ve worked really hard all year to get here.”
The way Conestoga controlled the action in the early going, it had the markings of a comfortable win. In the first half, the Pioneers held a 7-2 advantage in corners and outshot the Eagles by a 5-2 margin. They held a 1-0 lead at halftime, thanks to an unassisted goal from Kate Galica.

“We were fortunate to get off to that nice start and get the early lead,” said Conestoga coach Regan Marscher. “It was miserable out there and I felt bad for all the athletes that had to play in it.”
The rain and wind intensified in the second half, making even the simplest maneuver a slippery adventure. But, some solid defensive play on both ends — Eagles’ goalie Grave Meinke had eight saves on the day — kept it a one-goal game until Cumberland Valley broke through midway through the third on a goal from Mia Boardman.

“I think the conditions were getting to us a little bit by then,” said Marscher. “I think we lost a little bit of focus and let our guard down.  But I couldn’t be more proud of the way the girls responded.”
Just about halfway through the fourth period, the Pioneers brought the ball all the way down the left side of the field and into the circle.  Melissa Hewitt grabbed the ball right near the end line, drawing out the goalie, and sent it across to Carey, who delivered the game-winner, despite the last ditch efforts of a Cumberland Valley defender..
“I saw we were bringing the ball up on the left, and slid up on pads,” said Carey. “I saw the ball coming my way, and made sure I got my stick on it to chip it in.”
The last time Conestoga reached a state semifinal in field hockey, America was getting Rick-rolled for the first time — 1988. In 2021, the Pioneers have not yet lost in the state of Pennsylvania. Their lone defeat came to nationally ranked Oak Knoll of New Jersey at the MaxField Hockey Invitational in September.
“All this extra time together does feel like a gift,” said Marscher. “This team works so hard, and they are never finished working.  We have a tough team next, but these kids just seem to rise to the competition. We’ve already come as far as any Conestoga team since 1988. I am sure they are going to want to keep it going.”