Upper Perkiomen can’t climb out of early hole, falls to Twin Valley in PIAA Class 2A first round 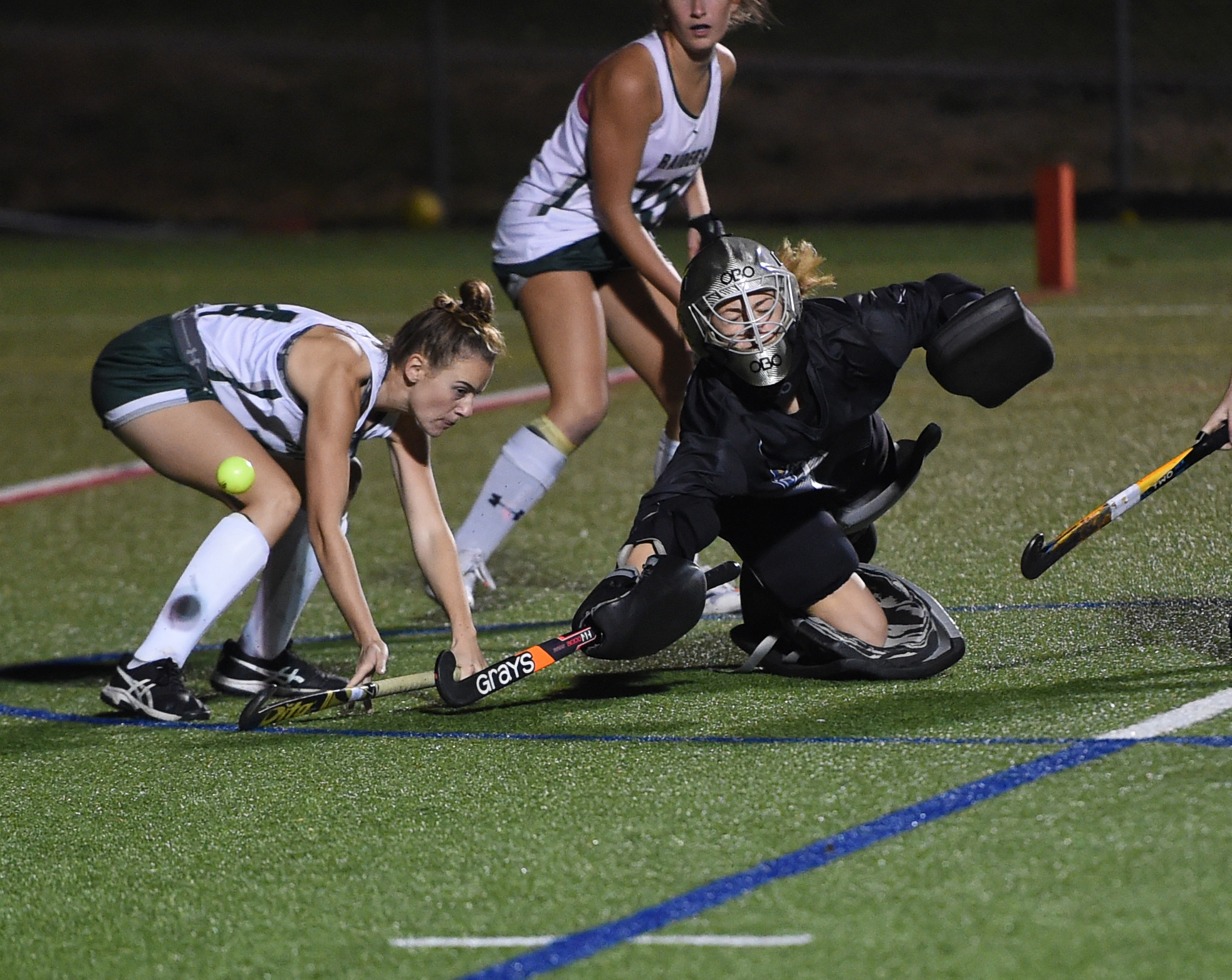 ELVERSON >> The Twin Valley field hockey team dropped an overtime contest to Upper Perkiomen on Oct. 15 in its final game before the Berks County and District 3 postseason.

The second loss of the season gave a lesson to the Raiders before their ‘second season’ began.

“We just learned we need to start right when we get on the field,” Twin Valley senior Natali Foster said.

Coming off a Berks title and the program’s first District 3 championship last week, the Raiders proved the lesson learned when they faced the Indians — District 1’s fourth seed — again in the PIAA Class 2A first round on Tuesday at Twin Valley.

Seniors Foster and Emma Winther gave Twin Valley (24-2) an early three-goal lead, and the Raiders survived a late Upper Perk (20-4-1) onslaught to come away with a 5-3 state playoff win — their fifth in four seasons.

“Coming into this game, we knew that we lost to them the first time that we played them,” Foster said. “Our one main goal was to work as a team because we didn’t want this to be our last game. We came in here and we wanted to get the job done and we did it, and it was amazing.”

The Raiders dominated the play early with Winther scoring three minutes, 33 seconds into the game before Foster made it 2-0 at the 2:58 mark in the first quarter.

“We’ve been playing since youth, so knowing we’re we’ll both be and I think those passes is what really got some of the shots off,” Winther said of the early start.

Just 34 seconds into the second period, Foster assisted on Winther’s second goal to give Twin Valley a comfortable 3-0 cushion.

“We needed to mark tighter,” Upper Perk coach Jamie Warren said. “They have good talent on that team, especially (Winther) so you have to mark tighter from the start. They’re high schoolers, so they don’t always get it, and they were nice shots, but that’s what it was. We weren’t marking tight enough and we weren’t denying the ball.”

Following the Raiders’ dominant start, play evened out in the second and third quarters with both teams getting their chances, but the score remained 3-0 through three periods.

Foster and Winther both noted the play of junior center back Hannah Schmittinger, who just recently started playing the position with a change in formation for the Raiders.

“Considering she’s a sophomore and she’s playing against all these D1 top commits and upperclassmen, I think she does a really good job of blocking those shots and just knowing where those balls will go,” Winther said of Stevens.

Upper Perk senior Takoda Wells finally got the Indians on the board, 3-1, with 13:36 to play. Wells scored two goals in the fourth, but both were answered by Twin Valley.

Freshman Jade Traynor gave the Indians another goal with 2:42 to go to cap a wild three-minute stretch, but the Raiders never let the game get down to one score.

“Determination, who wants to win, who wants to continue, that all becomes a factor when you get to district playoffs, states, when the talent level is pretty even,” Warren said. “It was a beautiful game though. I loved the passes that we made. I loved the looks that we had. I loved the goals that we scored. I just wish we could have had it for 60 minutes.”

Twin Valley’s Collette Lennon, right, gets her stick down to stop the progress of Upper Perkiomen’s Kylene Gooch during Tuesday’s PIAA Class 2A first round game. (Owen McCue – MediaNews Group)

The loss marked the end for an Indians’ senior class — highlighted by four-year starters Wells, Joyce, Luci Carpenter and Kylene Gooch and also including Gianna Delzingaro, Lucy Faulkner and Audrey Nagata — that won three straight Pioneer Athletic Conference championships, advanced to three straight District 1-2A semifinals (including a runner-up finish in 2019) and twice went to states among numerous individual honors.

“They set the bar high, they worked hard,” Warren said. “Obviously, a lot of them devoted time outside of high school hockey, which is key. … They knew what it takes to get to this level. We just gotta get to this level, and then we have to maintain it. That’s the challenging part.”

The Raiders’ senior class went to back-to-back state semifinals as freshmen and sophomores. A reduced field due to the COVID-19 pandemic kept them out of the 2020 PIAA bracket following an overtime loss to Hershey in last year’s District 3 semifinals.

Back in the state playoffs and on a seven-game win streak since the Oct. 15 loss to Upper Perk, the Raiders’ seniors are hoping to keep their careers alive as long as possible.

“Last year, it was so emotional when we lost that game,” Foster said. “It was a stroke in overtime, and it was just very emotional.”

“It feels good (to be back in states),” Winther said. “It’s back to normal, where we should be.”