Conestoga hangs on to edge Kennett in PIAA opener 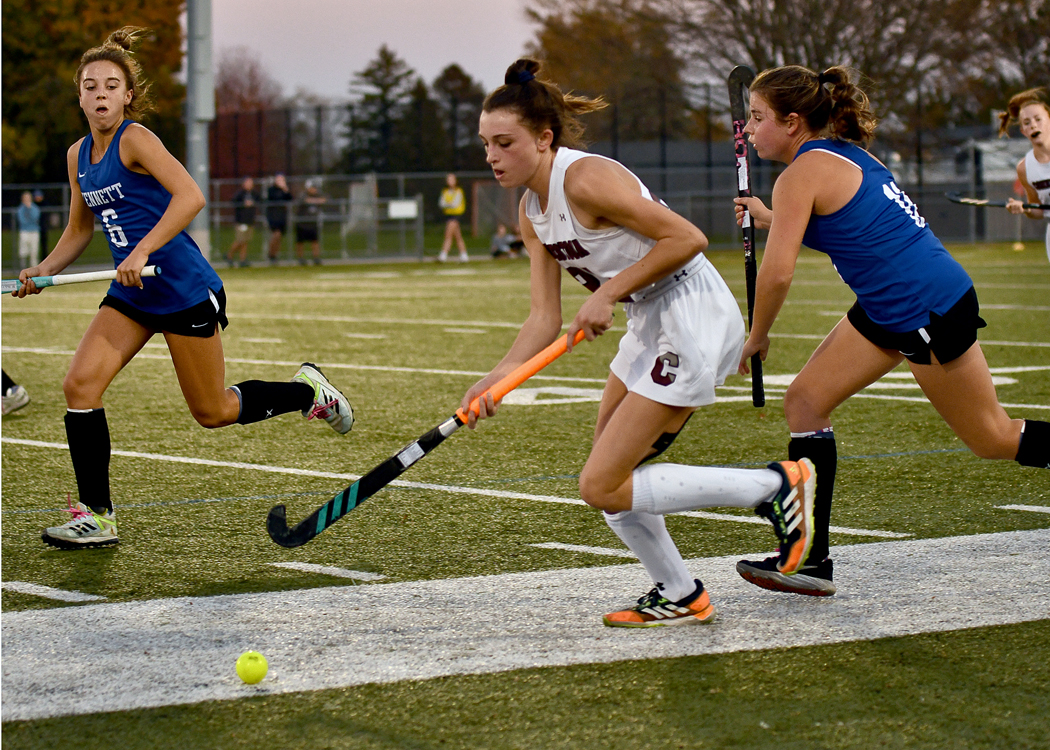 BERWYN >> In an odd quirk of the PIAA state field hockey brackets in Class 3A, the District 1 champion gets a first round match-up in the state tournament against the seventh-place finisher from the same district. In Conestoga’s case, it meant a rematch against a team it vanquished two weeks ago in the District quarterfinals: Kennett.

It’s never easy to beat a good team twice, let alone twice in less than two week’s time. The Blue Demons gave the Pioneers all they could handle, but in the end, a first period goal held up as the game winner, and Conestoga withstood at times furious pressure, and hung on for the 1-0 win.

With the win, Conestoga (21-1 overall) moves on to Saturday’s quarterfinal round, where they will square off against Cumberland Valley (17-4), the District 3 runner-up and a 9-0 winner over Northeast, at a site and time to be determined.

“Kennett played like they had nothing to lose,” said Conestoga coach Regan Marscher. “Kudos to those players and their coach for what they brought to the field today. Before the game, we talked about how Kennett was not a team we could take lightly, and I don’t think we did. I’m super proud of the way we kept our composure and focus and got the win.”

The lone goal of the game came halfway through the first period. Awarded a penalty corner, the Pioneers’ Kate Galica put the ball in play on the insert. The ball bounced around and through the crowd in front of the cage. Eventually, Lily Jamison got her stick on it, and came through with the goal.

“I don’t think we played as well as we could,” said Galica. “It’s kind of tough playing someone you just played, because both teams know what the other is doing. But we did what we had to, and I’m excited to know that we will be playing again on Saturday. We know we have so much more we can bring. We have a lot to look forward to.”

The rest of the way, it was Kennett controlling much of the action, and by game’s end, exerted enough pressure inside the circle that they held a significant advantage in penalty corners, doubling the Pioneers total, 8-4. On the defensive side, Maddie Sears had 14 saves for the Demons.

“I’m really proud of these girls and the kind of improvement we’ve seen throughout the season,” said Kennett coach Meghan Shumway. “Even just from a little over a week ago, the adjustments we made and how well we stepped to the ball and kept it on our sticks. We’ve got some things to work on with corners and other areas, but we have just about everyone back, and I think they’ll be hungry to go even further.”

Not enough praise can be put on the Pioneers’ defensive unit, anchored by goalie Alex Lepore. In the face of relentless pressure in a win-or-go-home game, Conestoga pitched a shutout.

“I couldn’t be more proud of the way we played on the defensive side of the field,” said Marscher. “Alex made some amazing saves, and we did a great job of clearing balls out. We struggled a bit in the midfield, making connections, and we’re going to be working on corners for the next few days. But we’re still playing. This is a team that had never played in states, let alone quarterfinals.”