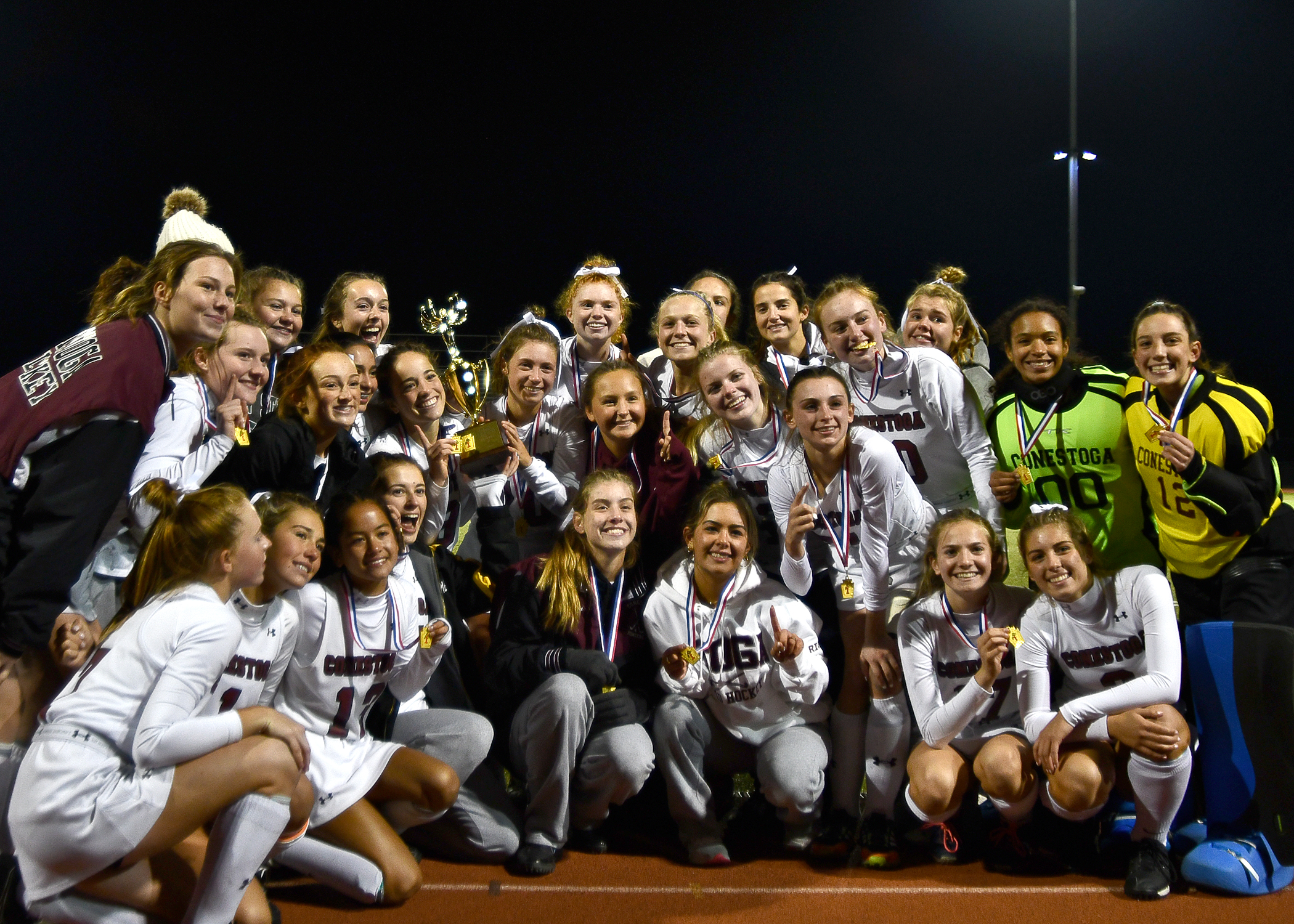 EAGLEVILLE—During the regular season matchup, Conestoga jumped out to an early 3-0 lead over Garnet Valley, only to see the Jaguars fight and claw their way back in it.  Though the Pioneers held on to win that game, and with it the Central League title, they were determined that they wouldn’t have a similar letdown in the District finals.

Saturday night, the Pioneers’ Kate Galica notched a pair of goals, and the Conestoga defensive unit, anchored by goalie Alex Lepore, was all but impenetrable.  Conestoga allowed just one goal in the waning minutes of the game, capturing the District 1, Class 3A championship with a 2-1 victory.

With the win, the Pioneers earned the right to host a first round game in the PIAA championship tournament.  Conestoga will square off against the District 1, seventh-place finisher, Kennett.

“That first time around, we got off to that hot start, and then watched as complacency set in,” said Conestoga coach Regan Marscher.   “We all put our minds into keeping focus for all four quarters, and never letting up.  The girls have worked so hard for this all season. I am just beside myself with pride for these girls.”

The two teams were scoreless through the first period, before Galica, with an assist from Melissa Hewitt, found the back of the cage for the 1-0 lead.

“We knew this was going to be a tough game,” said Galica.  “It’s a championship game, and you could tell how badly both teams wanted it.  But our mindset was to just keep playing our game, and when we score we score. My freshman year, we lost in the first round, so it feels incredible to win it all this time.”

Thanks in no small part to some outstanding play from Garnet Valley goalie Maura Greek, who made save after save, more than one of the spectacular variety, Conestoga wouldn’t score again until the fourth period.  Greek finished the night with 11 saves.

But Conestoga was just as stingy, with Lepore and fellow defenders like Lily Wolfe, swiftly cleared away every Jags threat.  Garnet Valley didn’t get on the board until just two minutes remained, on a goal from Alana Williams.  Galica’s second goal of the night had already given them a two-goal lead by that point.

“As far as I was concerned, we had to keep the mindset to just keep having fun,” said junior midfielder Amanda Hill.  “As much as you want to have that deadly serious mindset, I feel like just having fun playing the game helps staying within our game.  I am so excited to win this game, and we are very excited to see what we can do at states.  It’s just so much fun playing with this team.”

The Pioneers enter the state tournament following a pretty dominant run to the district title, outscoring the opposition 11-2 in four games, including a 4-0 game over Kennett in the quarterfinals.  But the Blue Demons battled back through the play-back bracket to qualify, and the teams start anew with 0-0 records on Tuesday.

“The mission from the beginning was winning a district title,” said Marscher.  “Everything from here on out is a gift.  We are going to enjoy this moment. Going forward, we’ll just take things a game at a time, and keep on enjoying the season.”