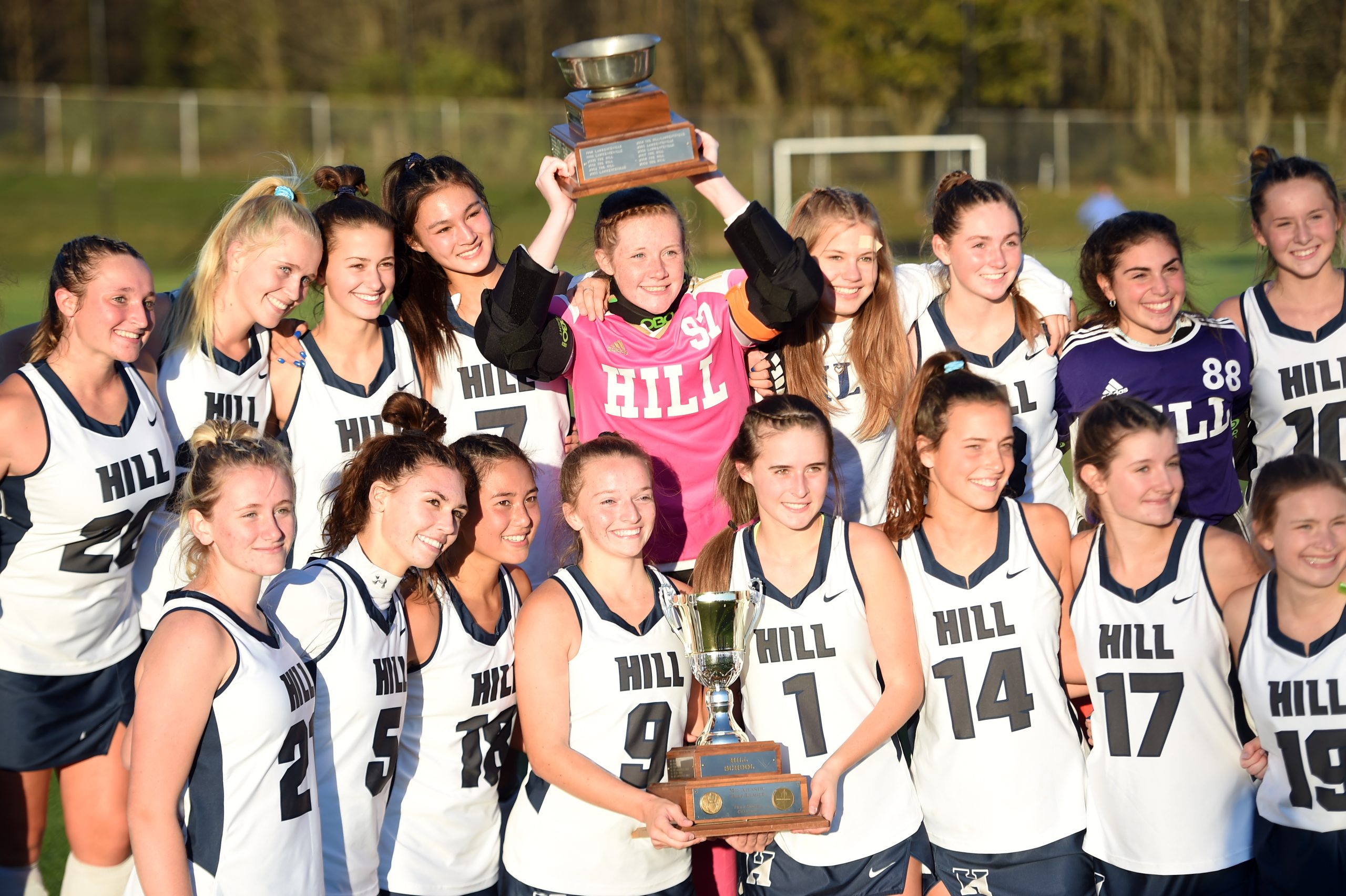 POTTSTOWN >> After a year away from the field, the Hill School field hockey team resumed its reign atop the Mid-Atlantic Prep League on Saturday afternoon.

In a battle of teams unbeaten in the league, the Rams took down rival Lawrenceville 5-0 to capture a third straight league championship (2018, 2019, 2021).

“Not being able to play last year, it made us want it even more,” senior Rease Coleman said. “We just worked harder. We worked 10 times harder, and we just put all our efforts into it.”

Hill goalie Hayley Gable made four saves, combining with Hala Silverstein for the shutout in goal in the championship win. Team captains Gable, Orsi and Coleman also noted the play of Caeli Robinson in being key to the victory.

Hill School 1, Lawrenceville 0 with 6:45 left in Q2. … Maggie Kondrath some nifty stick work to get in close for the goal. pic.twitter.com/P3z6oeXsCj

For seniors Gable, Orsi, Coleman and Ruthanne Sandner, the victory concluded a 15-0 showing in MAPL play during their three seasons (2020 was cancelled due to COVID) at the Hill School.

“I think it’s really cool just playing together since our freshman year, being able to do it three times,” Gable said. “Especially for me as a goalie keeping the 0 on the scoreboard three years in a row, it’s pretty amazing.”

“Being able to share this experience with the underclassmen as well is pretty special,” she added. “Obviously, Maddy, Rease and I have experienced this in years past, but for everyone else it’s an amazing experience.”

Play favored Lawrenceville for parts of a scoreless first period with Gable making several stops and Kirschner chipping in with a defensive save.

“Welcome to Hill vs Lawrenceville,” was coach Jennifer Weissbach’s message to her team after the break. Only Orsi, Coleman and Gable had seen major action in the rivalry game before.

It took a little while for the Rams to respond, but they took control in the middle of the second quarter and never looked back.

Hill School up 2-0 with nine to play in Q3. pic.twitter.com/yRZstantg9

Emilie Kirschner makes it 4-0 Hill with about five to play. pic.twitter.com/uSPOedPME6

Hill outcornered Lawrenceville 18-5 in the game, winning the last 14 corners. While it took the Rams some time to take advantage, the floodgates finally broke open in the fourth.

Savage increased the lead to 3-0 with 10:43 to play. Kirschner made it 4-0 just past the five minute mark before a late goal by Kondrath capped the game’s scoring.

“We’ve had a lot of games before this, so it really prepared us,” Orsi said. “We all have such a great connection and so as soon as it came on, it wasn’t anything really new for us. We put our sticks down, and we just played and we won.”

With another league title wrapped up, Hill (16-1) —ranked No. 3 in the country by MAX Field Hockey earlier in the week — turns its attention to the PAISAA tournament, where the Rams fell in the championship to Episcopal Academy in 2019.

EA is also responsible for the Rams’ lone loss this season, defeating Hill on its own turf 3-0 on Sept. 17.

“I know something for me coming in as a freshman, one of the things (coach Weissbach) and I talked about was winning MAPLs and moving onto the state championship, making that our biggest goal,” Gable said. “We’re looking forward to hopefully seeing them again.”

Hill School fans run out onto the field to celebrate with the field hockey team following a win over Lawrenceville on Saturday. (Owen McCue – MediaNews Group)

Hill School fans run out onto the field to celebrate with the field hockey team following a win over Lawrenceville on Saturday. (Owen McCue – MediaNews Group)