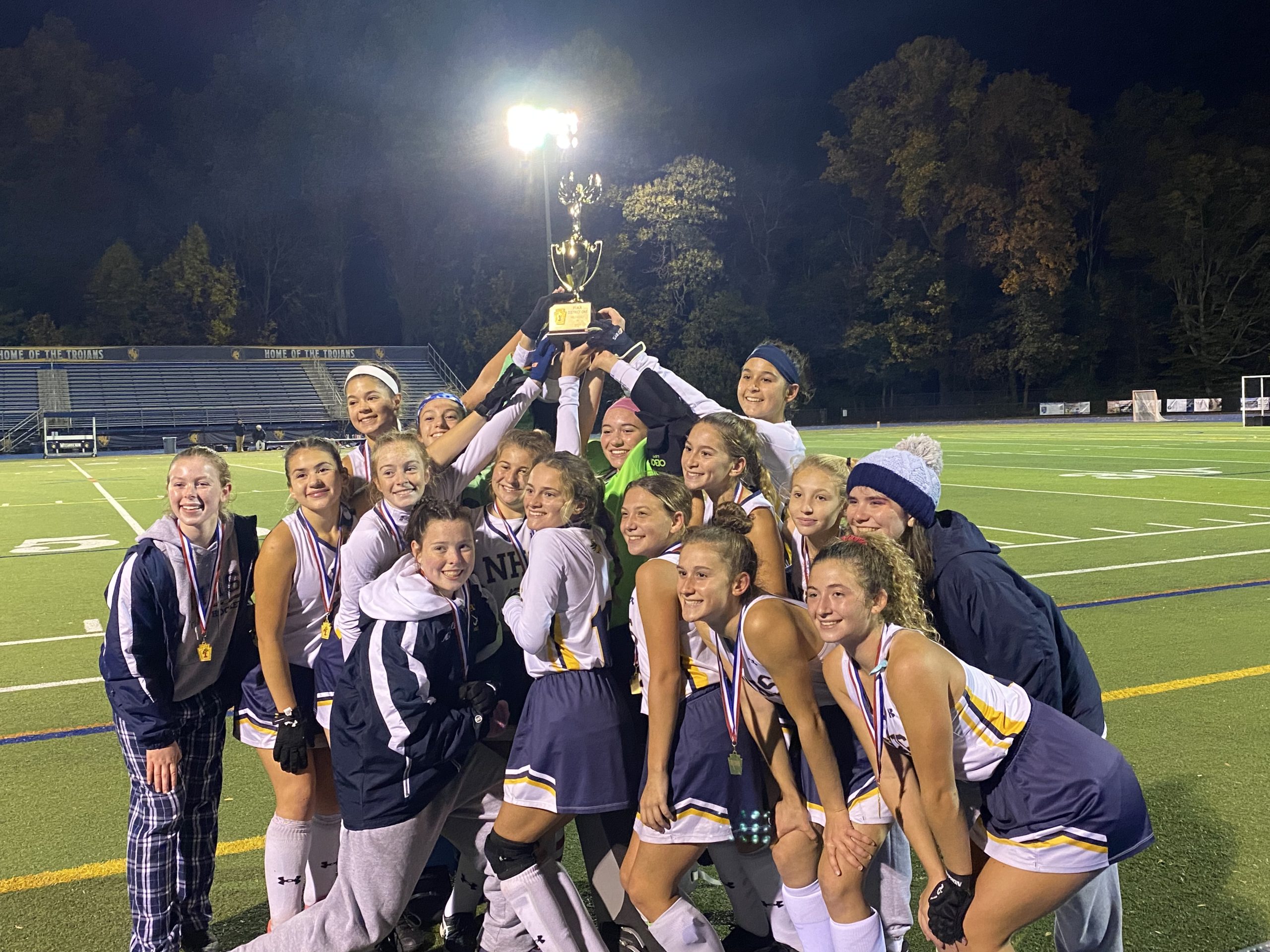 The New Hope-Solebury field hockey team takes a photo with the District 1-1A championship trophy after the Lions' 3-1 win over Dock Mennonite in the district final on Wednesday, Nov. 3, 2021 at Wissahickon. (Mike Cabrey/MediaNews Group)

LOWER GWYNEDD >> Momentum hung in the air and New Hope-Solebury’s Avery Mendola knocked it into the back of the cage.

Less than two minutes after the Dock Mennonite field hockey team had cut the top-seeded Lions’ lead to 2-1, a shot denied by a goalkeeper kick save popped up and Mendola was in the right spot to bat the rebound out of mid-air and in for a goal with 1:38 left in the third quarter.

“It was lucky, too, cause it wasn’t called dangerous or anything,” New Hope-Solebury junior Sophia Cozza said. “It went right over the goalie so I think that was really good.”

Mendola’s volley gave the Lions back the two-goal advantage and they never let the third-seeded Pioneers get any closer in the fourth as New Hope-Solebury claimed its fifth consecutive District 1-1A championship with a 3-1 victory Wednesday night at Wissahickon.

FIELD HOCKEY: 1:38 3Q @LionsNhs 3, Dock Mennonite 1. Lions got back up 2 on a corner as Avery Mendola knocks a ball out of the air & into the cage. pic.twitter.com/STlZCW2zlP

“It really means a lot to us,” Cozza said. “This was, personally on the team, my third time winning it since I’ve been playing but even though we do win it every year, every year is a new set of challenges.

“This year we only had like 13 people on the team and every year we want to make sure the seniors had their best season ever. We want to win, we want to play a great game. We played a great game today.”

Cozza collected assists on goals by Morgan Riggione and Madie Thistlewaite as the Lions (16-2-1) took a 2-0 lead into halftime. Dock (14-5-0) put together its best play in the third and converted on a corner when Eden Schrag scored in front with 3:06 left in the period.

But just 1:28 later Mendola batted a ball into the cage on a corner as the Lions went on to deny Dock its first district title since 2001.

“It was exciting to score,” Dock coach Michelle Waldspurger said. “It definitely helped our momentum. Unfortunately you don’t want to give up then after a goal and they came down and scored unfortunately. But it was a good goal for us to score.”

It was the fourth straight season New Hope-Solebury has topped the Pioneers in districts, the former BAL rivals having met in the 1A semifinals the previous three years. Wednesday’s matchup was the closest of the four contests and the first in which Dock Mennonite has scored.

“We were all very excited because we had played them before a few years ago and they had crushed us really hard,” Dock Mennonite junior Olivia Zaskoda said. “But they had played Springfield, who we had played before.  And we didn’t play great that game and we lost to them.  But Springfield and them had a close game so we knew that we could have a close game with them.

“So we tried to go out with a great mind set and tried to play at the best that we could.”

Both teams qualified for the PIAA tournament by reaching the district final. The Pioneers are making their first state appearance since 2016 and face District 12 champ Archbishop Wood in the first round Tuesday.

“To achieve this this year with a young team is outstanding,” Waldspurger said. “We couldn’t ask for anything more. Just a great opportunity for us to play in states, it was definitely a surprise.”

FIELD HOCKEY: @LionsNhs celebrates at the end of its 3-1 win over Dock Mennonite in the District 1-1A final. pic.twitter.com/J4Xo8jc6ox

New Hope-Solebury is in states for the sixth consecutive season. The SOL Freedom Division champs, who have won eight in a row since a 3-0 loss at Wissahickon Oct. 6, take on the District 3’s third-place finisher – either Boiling Springs or Lancaster Mennonite – in the first round.

“Speechless, I’m just speechless,” said New Hope-Solebury senior Jess Kinker of claiming the district title. “I feel like we really relied on the seniors last year and then just losing them this year it’s like ‘Oh no our top scorers just disappeared’ and it’s like we really had to work our butts (off), keep grinding. So it just means a lot that we could up that legacy that they started.”

On Dock’s goal to pull it within 2-1, Celeste Derstine’s shot from the right side of the circle was blocked by Lions goalie Lydia Eastburn. Zaskoda collected the rebound and had her shot stopped by Eastburn but Zaskoda corralled the ball again then sent it through a crowd to an open Schrag, who pushed the ball over the goal line.

“So I went to the post, Celeste shot it on the corner and then, we had talked about practicing the different angled shots,” Zaskoda said. “Cause that’s what New Hope does a lot so then I saw Eden over there so if we crossed it to goal then she could get it in.”

It took only 88 seconds of game time for New Hope-Solebury to respond on the second of back-to-back corners.

After Cozza’s rip from the top of the circle hit a defender, Kat Thistlewaite got off a shot that was kick-saved by Pioneers goalie Haley Harper. The rebound, however, knocked up to Mendola, who batted it out of the air to loft it into the cage.

“When they scored we were kind of like ‘Oh shoot they can take us.’” Cozza said. “And then when we got the third goal right away after that the team’s level of play just went right back up, it was really good again.”

Riggione gave the Lions a 1-0 lead in the first quarter by sliding a shot in at 8:48.

FIELD HOCKEY: 6:11 2Q @LionsNhs 2,Dock 0. Madie Thistlewaite slots a ball into the cage off an assist from Sophia Cozza. pic.twitter.com/tndJxmC8dC

In the second quarter, Cozza blasted a shot off the left post then later set up New Hope-Solebury’s second goal at 6:11. Cozza pulled back to create space from a defender then sent a ball towards the cage – Thistlewaite getting to it and one-timing a shot into the cage.

“I think what we’ve been working on throughout the season was really cutting to the ball in the circle and just getting the rebounds off the goal,” Cozza said.  “And so towards the beginning of the season I would just hit the balls through the middle and it would just go right through, nobody would get it. But we were really working out, I would be like ‘Madie, get the ball,’ and that’s why she scored so that was really good.”

Cozza rifled a ball into the cage in the first half’s final minute but it did not count as the shot came from just outside the top of the circle as the Lions’ lead remained 2-0.