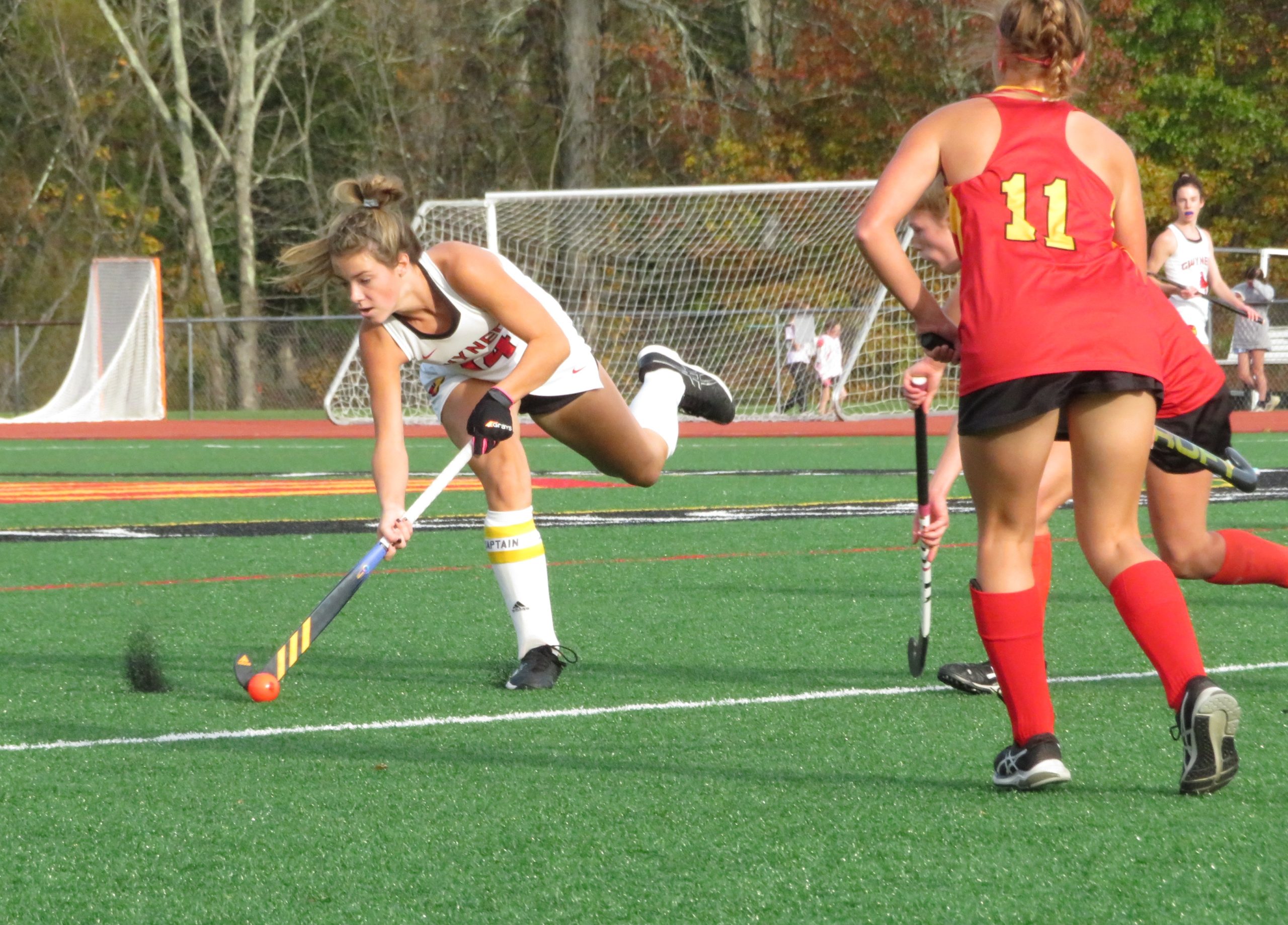 Less than two minutes after the break, the Monarchs’ Alaina McVeigh made the Vikings pay for their missed chances.

Taking Audrey Beck’s insertion pass on a corner, the senior Duke commit’s shot from the left side of the circle ticked off a defender stick, over the goalkeeper’s pads into the cage 81 seconds into the third quarter.

“Felt good to get to 3-0,” McVeigh said. “I think that was really confidence for us – 3-0, obviously it’s hard for the other team to come back from.”

Sixth-seeded East could never put a dent in the deficit while McVeigh and Sydney Mandato scored late in the fourth as No. 3 Gwynedd Mercy pulled away to earn a 5-0 District 1-2A quarterfinal victory Thursday afternoon.

“We didn’t really know a lot about this team, we haven’t played them before,” McVeigh said. “So we knew everyone at districts is good so we just said come out and play the best we can tonight and I think we played really well.

McVeigh finished with a hat trick and also picked up an assist on the first of two goals by junior Mandato, a Penn commit, as Gwynedd Mercy (15-2-1) clinched its first PIAA tournament berth since 2018.

“It means so much,” McVeigh said. “I know last year we came in second in the districts but obviously it was weird with COVID so I think this is a good year to come back and get into states now.”

FIELD HOCKEY: 13:39 3Q @GMAHighSchool 3, @WCEVikings 0. Alaina McVeigh scores her 2nd of the day, her shot on a corner taking a deflection & going into the cage. pic.twitter.com/414jEMSQoz

The Monarchs, unbeaten in their last 13 games, advance to visit No. 2 Upper Perkiomen – an 8-1 winner over No. 7 Phoenixville – in the district semifinals Tuesday at a time to be announced. GMA topped Upper Perk 5-2 in last year’s semis before falling to Villa Maria 5-3 in the final.

“It was very exciting, that’s been our goal since the beginning of the season,” GMA coach Allyson Fuller said. “States, we don’t care about any other games – it’s playoffs, getting to states and getting as far along as we can. For all of their work to then materialize in this way, it’s great to see.”

For West Chester East, an apparent Carey Werley goal that was waived off at 8:44 in the fourth for being too high added to a frustrating day in the circle, which concluded with the Vikings’ final corner being denied by a defensive save from GMA’s Catherine Fitzgerald.

“It’s one of those situations where you just want to say just let it go, right, because Carey’s been a strong corner shooter for us all season,” Vikings coach Jessica Rice said. “And I felt like it would of lifted our girls’ spirits if they could of at least put one on the board so it was definitely disappointing.”

WC East, which claimed its first district victory since 2017 when it beat No. 11 Upper Dublin 5-1 in the first round Tuesday, finishes its season at 13-6-1.

“We have eight seniors and I have to tell you and I could almost cry, in all my years coaching here it’s an insane group,” Rice said. “They’re true leaders and play with heart and don’t give up, it’s just sad to see their season end.”

McVeigh and Mandato both had four goals in GMA’s 14-0 first-round win over No. 14 Strath Haven with the duo continuing their strong scoring form two days later.

“For our entire team we all expect a certain level and everybody shines in different moments and Sydney and Alaina both do a great job in our offensive circle and executing,” Fuller said. “So when they execute it’s good for them, it’s good for us and any given person can finish in front of the cage but, yes, they are two of our strongest scorers”

FIELD HOCKEY: 6:21 1Q @GMAHighSchool 2, @WCEVikings 0. Monarchs strike again on a corner as Alaina McVeigh blasts a reverse shot into the top of the cage. pic.twitter.com/c63ZsRLsFt

The Monarchs scored twice in a span of just 59 seconds in the first quarter, Mandato with the opening tally at 7:22 with the host going up 2-0 on a McVeigh blast at 6:21.

“We always come out with a score early mindset,” Fuller said. “We make it a point to try and come out strong from the first whistle, not to take time to get into it and each corner we work on, OK, if this is the only corner we get this is on the one that we need to nail. And we’re been practicing a lot so the girls, they’re good at them.”

GMA’s first goal came off a corner – McVeigh taking the insertion pass at the top of the circle then sliding a pass to Mandato for a shot that took a bounce right in front of the goal line and into the cage.

“I tried to play off of Sydney and Sydney plays off of me,” McVeigh said. “I think we really work well together.”

The Monarchs struck again after their next corner. McVeigh had the ball knocked away at the top of the circle but Serena Olden got to it and sent it back into the circle between a pair of defenders to McVeigh, who unleashed a blistering reverse shot that went into the top left corner.

“It’s one of my favorite shots,” McVeigh said. “I try to get it off a lot in games.”

On the second of back-to-back West Chester East’s corners in the second quarter, a Werley shot got through traffic but went outside of the left post.

Kathryn Palmer ripped a shot from the top of the circle on another corner onl for it to go wide left.

“Unfortunately today our corners were missing by a quarter of an inch, half of an inch so that didn’t work to our advantage,” Rice said. “We did, we had plenty of opportunities to put the ball on the boards and unfortunately we missed by inches every time and just didn’t work out for us today.”

McVeigh scored her second at 13:39 in the third, getting off a shot before East could close out on her with the ball taking a fortuitous redirection off a Vikings stick for a 3-0 Gwynedd Mercy lead.

“I felt like I had a little more time,” McVeigh said. “And I like when I get that open shot on the goalie.”

The Monarchs tacked on their final two goals with less than two minutes remaining in the fourth, McVeigh completing her hat trick at 1:41 with Mandato collecting her second at 1:22.