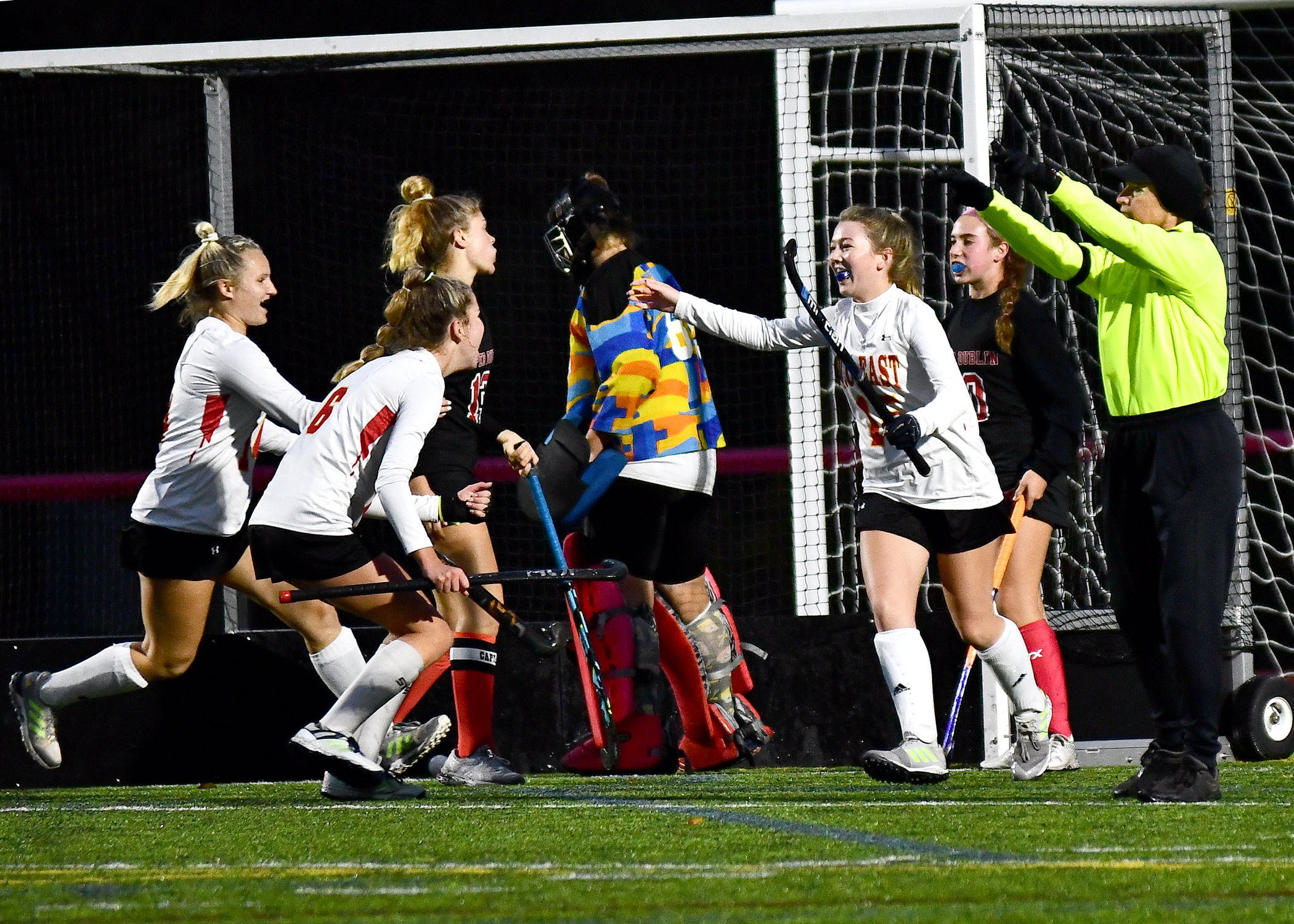 WEST GOSHEN — The Vikings are no stranger to the field hockey playoffs, as West Chester East qualifies for the District tourney on a fairly regular basis. Getting past that first hurdle, though, has been an entirely different story. For the Vikings seniors, victory in that first round game has been elusive.

West Chester East (13-5-1) came into Tuesday’s opening round of the District 1, Class 2A tournament as the No. 6 seed, earning a chance to host No. 11 Upper Dublin (8-10) on a chilly and damp night in West Goshen. The Vikings controlled the tempo from the outset, and cleared that first round hurdle convincingly, with three different goal scorers in a 5-1 victory.

With the win, the Vikings advance to Thursday’s quarterfinal round, where they will square off against No. 3 Gwynedd Mercy.

“My four years of field hockey here, this was as far as we’ve gotten,” said Vikings’ senior Kathryn Palmer. “It feels great to finally get this win and put ourselves a win away from states. Especially with this team—it’s been amazing to see all the hard work we’ve put in together as a team paying off.”

Though the Vikings controlled the ball for much of the first half, they were stymied inside the circle until late in the first period, when Anna Capelli converted on a penalty corner. The Vikings struck again midway through the second, this time on a goal from Kathryn Palmer.

“We didn’t get out to the kind of start we would have wanted for as much time we spent inside the circle,” said Palmer. “I always try to just keep going after it. Mistakes are just ways to improve—if I miss it, all I want is to get it back. We really came through strong in the second half.”

No small part of the reason the Vikings struggled to find the back of the cage was because of the play of Upper Dublin goalie Dara Fishman. Fishman made save after save in the first half, many of the impressive variety, and finished with 16 for the game. Her stinginess in the cage kept the Cardinals in the game until they, too, picked up a goal just before the break, when Ashley MacNeal’s goal made it a tight 2-1 contest at halftime.

“I’m not sure too many people expected us to even be here,” said Cardinal coach Emily Town, in her first year at Upper Dublin. “So I am really proud of my nine seniors and all the other players that got us to this point. When we had our chances, we did execute, but it just wasn’t enough today.”

The Vikings turned it up in the second half, stepping up both offensive pressure, and playing a tight defense that required the goalie tandem of Claire Madarasz and Nora Whitcomb to make a mere three combined saves on the night. The anchor of that defensive unit, Carey Werley, even chipped in with a goal of her own on a penalty corner.

“I have to credit Carey Werley, we are so lucky to have her back there,” said Vikings’ coach Jessica Rice. “She is a steadfast defender who plays with complete composure. Our senior left back, Grace Treon, came up with some really big balls. Front to back, this team communicated really well tonight.”

Capelli and Palmer each added another goal on the night to round out the scoring.

Though there will surely be some time to celebrate the win tonight, the Vikings still have bigger fish to fry, and can’t simply rest on their laurels. One more win, and West Chester East will lock up a spot in the PIAA Championships.

“We can’t be satisfied,” said Rice. “It’s exciting to get past the first round, especially these seniors. But none of us is ready for it to end. It’s a game-by-game mentality. We’ve had some really close games against some really tough opponents this year, so I just feel like this team knows it can step up and get the job done.”

For Upper Dublin, the season comes to a close.