North Penn pulls away in 3rd, rolls past Haverford in District 1-3A first round 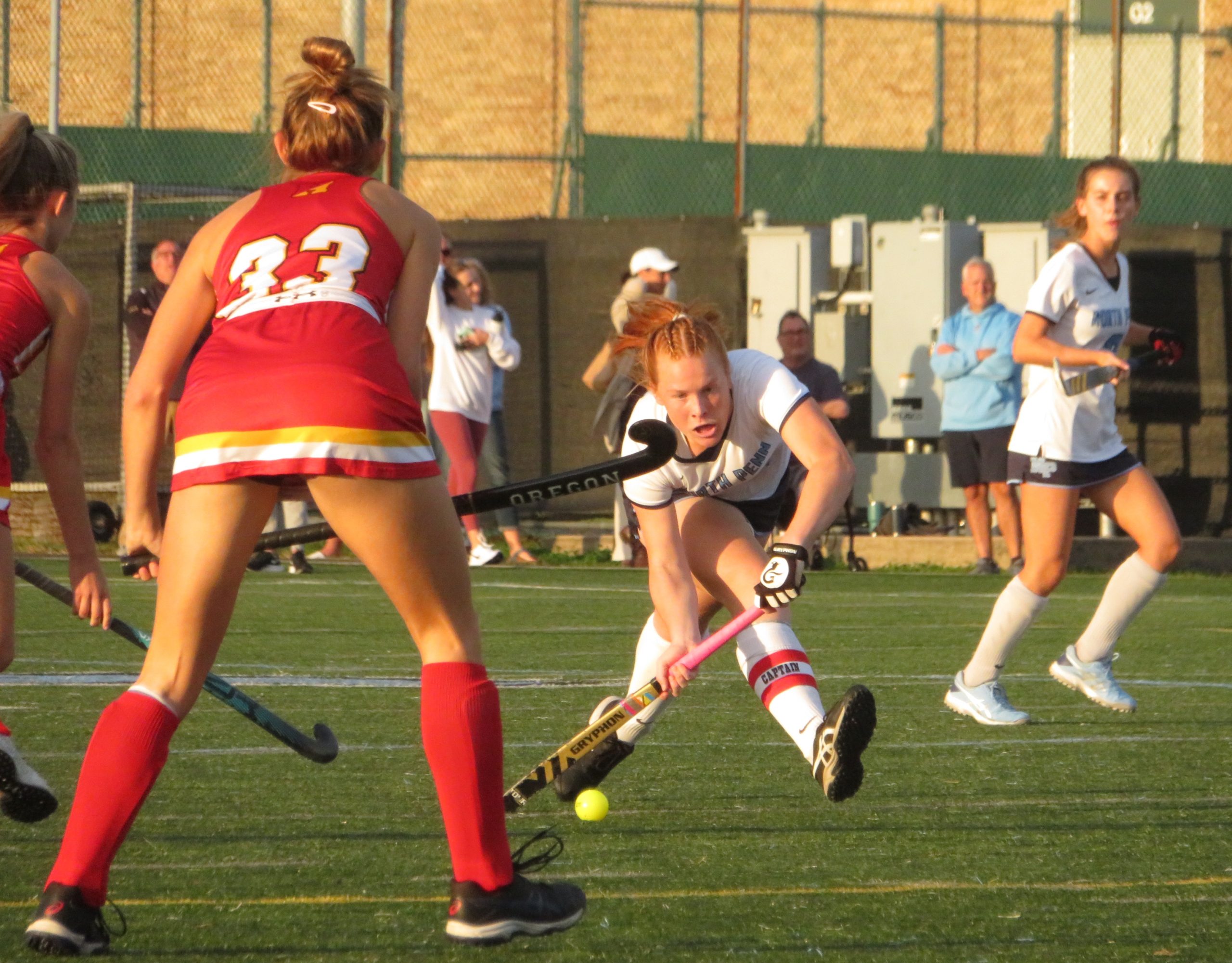 TOWAMENCIN >> It all came together after halftime for the North Penn field hockey team as the Knights rolled to the second round of the District 1-3A tournament.

“It just felt fun and everything was working,” NP sophomore Riley O’Donnell said. “And it was just a teamwork kind of play tonight and it was just really fun to be out there.”

O’Donnell scored the first of North Penn’s four goals in the third quarter as the No. 11 seed Knights turned a 2-1 lead over visiting No. 22 Haverford at the break into the a 6-1 advantage entering the fourth as they went on to claim a 8-2 first-round victory Monday night.

“We had great communication – we were calling for the ball, talking off the ball and our passes were just great,” North Penn senior Maddie Waldspurger said. “No one really took it themselves, we were passing it and finding each other which we kind of struggled with a little bit earlier so it was great that we got that down.”

Waldspurger and Kerry O’Donnell each finished with two goals and an assist. Waldspurger, a St. Francis University commit, pulled the hosts level 1-1 when she scored on a corner with no time left in the first quarter while O’Donnell put the Knights up 2-1 on a corner at 8:45 in the second quarter. Both found the back of the cage in the third as North Penn (13-5-1) earned its first district victory since 2017.

“I think we just settled into the game a little bit,” Knights coach Shannon McCracken said. “You have to be careful because it’s playoffs, you can’t wait too long to settle in but I think we just maintained possession so well it was just a matter of time for us to settle in. And our speed is one of our strengths and I think we were able to outrun them.”

North Penn advances to visit No. 6 seed Methacton in the second round 6 p.m. Wednesday. The Knights topped the Warriors 2-1 in the season opener for both teams at North Penn back on Sept. 3.

“You look to see if you can pick up any tendencies and stuff like that but so much has changed, our team is completely different since that first time we played them and so are they,” McCracken said. “And playoffs are all about just who want it more, who’s hitting momentum at the right time and stuff like that. So I mean they’re a great team, we’re a great team, I think we’re actually pretty similar in our play so I think it’s going to be a great matchup. We’re excited.”

FIELD HOCKEY: 5:24 3Q @NPFieldHockey 5, Haverford 1. Maddie Waldspurger rips a reverse shot into the cage for her 2nd goal of the night. pic.twitter.com/MTYNzcVLq5

Maura Quaile gave the Haverford a 1-0 lead, making a run into the circle from the right side and ripping a shot in at 4:07 in the opening quarter.

“I practice curling baseline a lot, that’s something our team has worked on pretty much all season, we’ve improved on as the season’s gone on,” Quaile said. “So I kind of just ran through the normal baseline curl drill and I saw the lower-angel shot so I took it.”

But North Penn’s constant pushes down the field eventually yielded results. The Knights converted twice on corners for a 2-1 halftime lead then went up 3-1 less than four minutes into the third as Riley O’Donnell knocked a ball in off a pass from Erin O’Donnell.

North Penn had put seven goals in by the time Quaile, a St. Joseph’s commit, picked up the assist on Ella VanLuvender’s strike on a corner in the fourth.

“They have some really quick triangle passes and we haven’t seen that kind of pressure very much this whole season, Quaile said. “But I think we did a pretty good job, we held our own for a while. We lost it a little bit in the third but it wasn’t too bad.”

Haverfords’ Maura Quaile (4) celebrates after scoring in the first quarter against North Penn during their District 1-3A first round game on Monday, Oct. 25, 2021. (Mike Cabrey/MediaNews Group)

Waldspurger made it 1-1 with no time left in the first quarter on second of back-to-back NP corners, taking Kerry O’Donnell’s insertion pass at the top right of the circle and blasting a low shot into the cage’s left corner.

“Felt like I was open so I just whacked it,” Waldspurger said.

The Knights grabbed the lead for good at 8:45 on a well-executed corner in the second quarter – a ball from Waldspurger redirected by Riley O’Donnell with it bouncing to the left post where Kerry O’Donnell sent it in for the 2-1 edge.

FIELD HOCKEY: 8:45 2Q @NPFieldHockey 2, @HPrideAthletics 1. Nice corner by the Knights ends with Kerry O’Donnell scoring at the left post off an assist from Riley O’Donnell. pic.twitter.com/koNN249pxo

Erin O’Donnell, a James Madison commit, drove down the end line then found Riley O’Donnell in front for goal at 11:28 in the third.

“I was just like she’s about to send it so I just stayed right there,” Riley O’Donnell said. “And it was a perfect ball and I just hit it right in.”

Erin O’Donnell made it 4-1 at 7:46 as she went around a defender then at the left post put the ball between the keeper’s pads and into the cage.

Waldspurger collected her second goal of the net by driving into the circle then creating enough space from a defense to let go a reverse shot that sail in at 5:24.

“I saw the opportunity,” Waldspurger said. “Riley might have passed it to me and I was open so I just whacked it again.”

North Penn’s Maddie Waldspurger (26) works to get around Haverford’s Erin Hughes during their District 1-3A first round game on Monday, Oct. 25, 2021. (Mike Cabrey/MediaNews Group)

Kerry O’Donnell tallied her second by getting to a loose ball in the circle, avoiding a stick check then slotting a shot into the right corner with 1:26 left in the third.

In the fourth, the Knights made it 7-1 when Bay Detweiler redirected in a shot from Waldspurger. VanLuvender rifled a shot in on a corner to give the Fords a second goal before NP’s Ella Sanfelice found the back of the cage for the final scoreline.