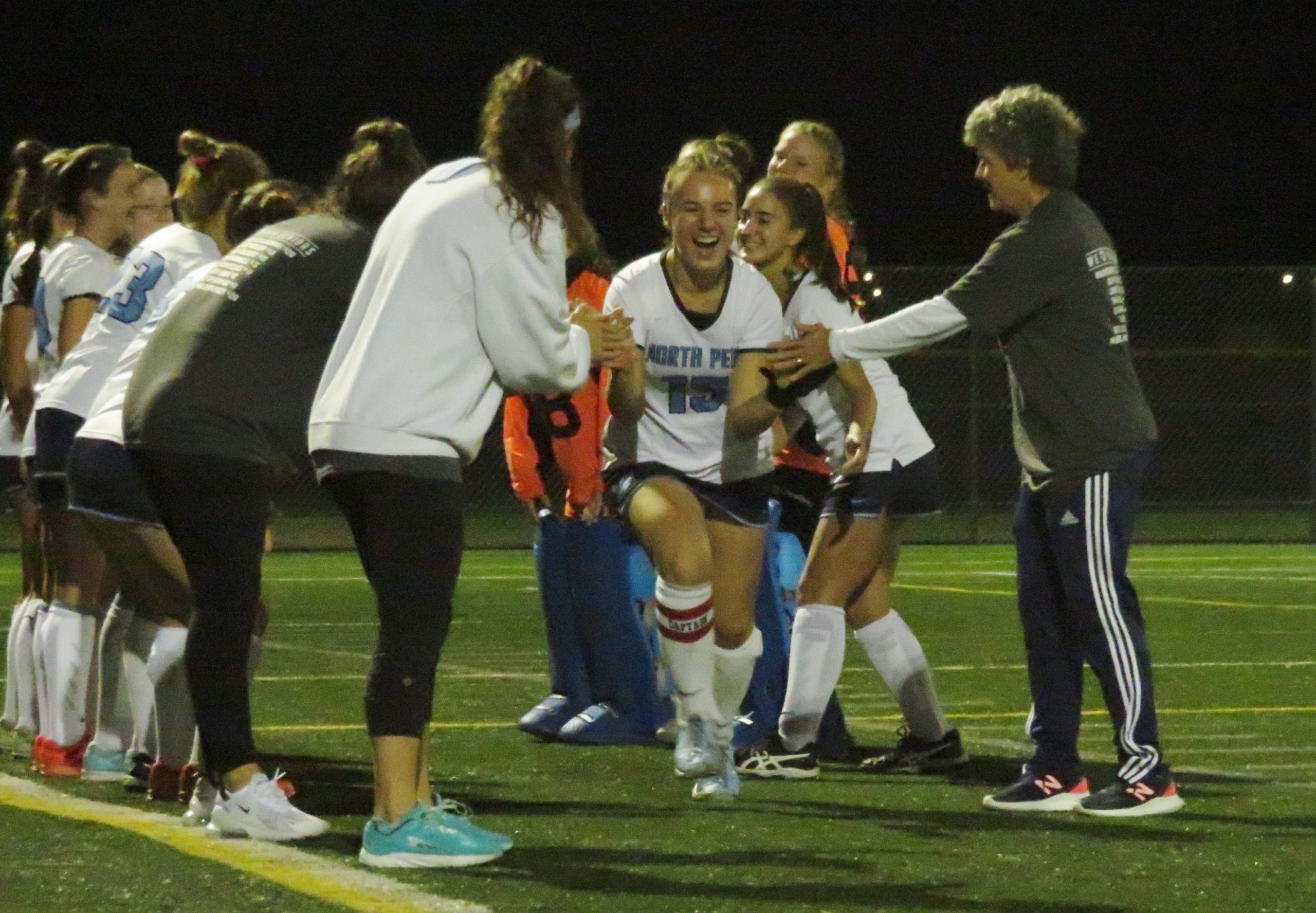 TOWAMENCIN >> It did not take long for Ella Sanfelice to get the scoring started on North Penn field hockey’s Senior Night.

“I was just there,” Sanfelice said. “I always make sure to do my job when I’m on post, always have my stick down so I just really made sure I was there to get it in.”

Less than two minutes into the Suburban One League Colonial Division contest with visiting Pennridge, Sanfelice had the Knights ahead after putting a shot in at the left post off an assist from Erin O’Donnell.

North Penn added two more goals to lead 3-0 after the first quarter then pulled away with three more in the third as the Knights cruised to their ninth consecutive victory, shutting out the Rams 9-0 Wednesday night.

“We always say every game we’re going to score in the first two minutes, so that’s always our goal,” O’Donnell said. “And we scored in like the first three so that was awesome. And that just set the tone for the rest of the game.”

O’Donnell, a James Madison commit, assisted on North Penn’s first two goals then scored its third while Sanfelice finished with two goals – knocking in a rebound in the fourth after giving the Knights the quick 1-0 advantage at 13:05 in the opening quarter.

“It was honestly really special to be a senior and get the first goal,” she said. “It wasn’t something I expected at all.”

“We were connecting so much,” Sparango said. “We were really trusting each other on the field. Our passes looked amazing and it was just all fluid and connected.”

North Penn began the season with three straight wins followed by three straight losses. But since falling at home to Central Bucks East 3-2 Sept. 22 to drop to .500, the Knights have rolled through their schedule, outscoring teams 57-3 during their current win streak.

“I think it’s really just been we’ve been motivating each other a lot lately,” Sanfelice said. “And not taking the game into our own hands and really making sure it’s a team effort and everyone’s doing their jobs which is making the game flow a lot more smooth.”

“It’s a huge game, we really want that win,” Sparango said. “But I’m excited to show them how much further we have come since we’ve played them and how much we’ve improved and I think it’s going to be a really good game.”

Despite the final score, Rams goalkeepers Molly Bross and Maia Machado had solid performances, the duo combining for 19 saves. NP keeper Kiera Holt had one save.

After no goals in the second quarter, the Knights increased their lead to 4-0 at 6:19 in the third when Sperling worked into the circle from the right side and slid a ball to Riley O’Donnell, who spun free of a defender and tapped a shot through the goalie’s pads and into the cage.

Sparango made it 5-0 with a terrific finish, swatting the ball out of the air after Riley O’Donnell’s reverse shot was saved to bat the ball in at 4:07.

“Honestly it was just a reaction,” Sparango said. “I saw it coming off of the goalie’s stick which was a great save by her and then I just put it in.”

The Knights tallied their sixth goal off a corner as Sparango’s redirect at the right post fell to Sperling, who ripped a shot off a bounce into the cage.

Sanfelice scored her second for a 7-0 NP lead in the fourth after the Knights got a ball back into the circle after a corner – a shot by Riley O’Donnell was saved but Sanfelice was there at the left post to get it over the goal line.

“It was just a really crazy experience tonight to be able to score two goals on my Senior Night,” Sanfelice said.

McGeehan capped the night’s scoring by cutting around the goalie and flicking a shot into the cage.

After Sanfelice gave North Penn a 1-0 lead at 13:03 in the first quarter, the Knights doubled the margin on a corner at 7:29. Erin O’Donnell pushed the ball forward from the top of the circle, regained possession then found Kerry O’Donnell at the left post for the goal.

Erin O’Donnell scored to make it 3-0  with 5:49 left in the first quarter, slotting a shot between the goalie and the right post.

“At first when I looked up I was looking for a cross over and then I just saw the opening,” Erin O’Donnell said. “And I was like ‘Just take it.”