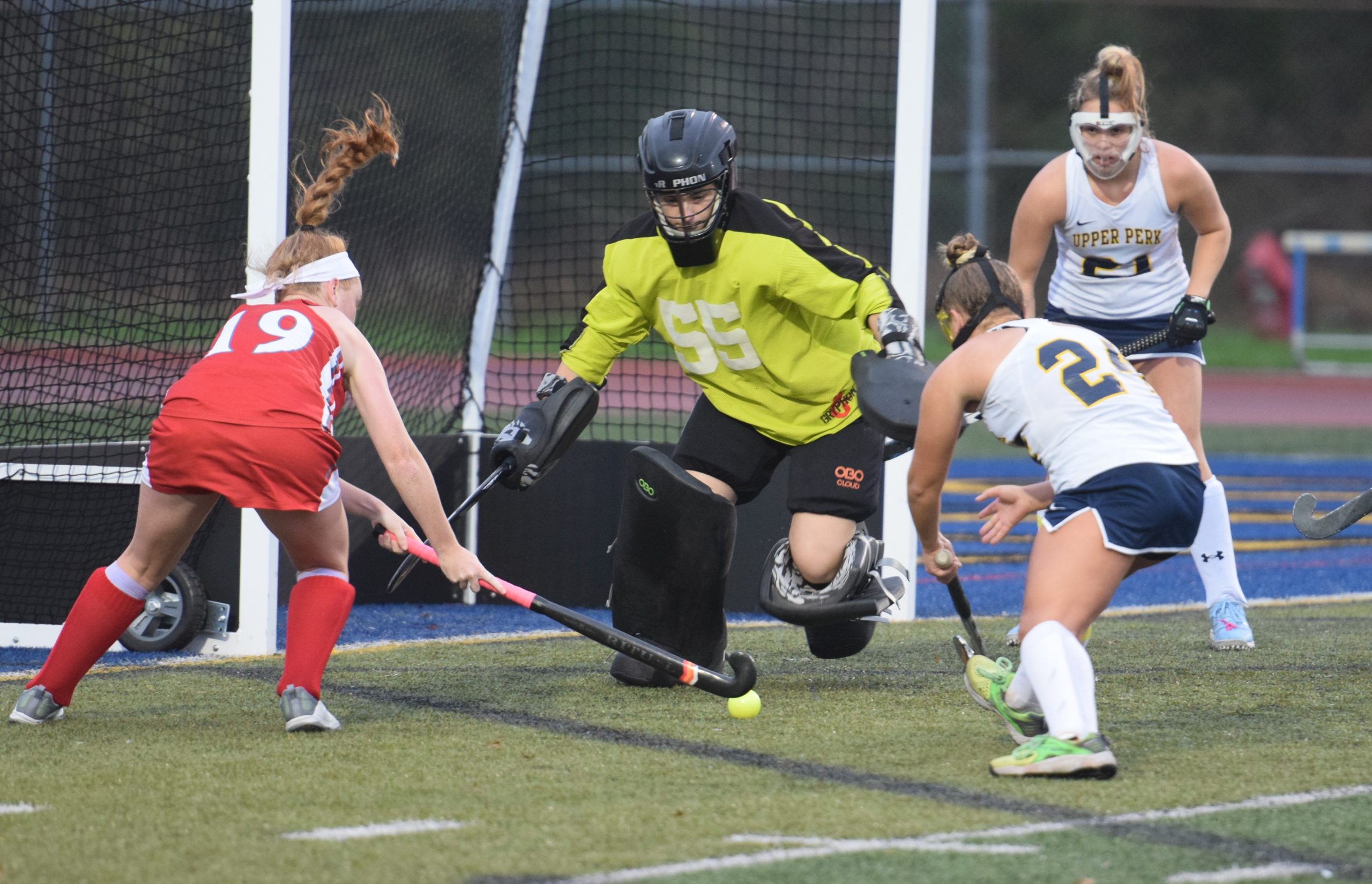 Outlook: The Bears have taken their game to turf this year. Boyertown will play all but one of its games on the road this season and practice at the 422 Sportsplex in an effort to make the adjustment. The Bears have a strong group of returners highlighted by 2020 All-Area first teamers Lauren Eves (Northeastern commit) and Katelyn Dulin and senior Remi Lloyd (Wagner) and lots of depth that could have them poised for a breakout year under coach Alicia Terrizzi in her first years as head coach since 2001. “We are a very deep team and have many players who can play multiple positions,” Terrizzi said. “We are able to rotate many players onto the field and still have a very strong line-up on the field.”

Outlook: Third-year coach Autumn Gilmore guided Boone to improved marks in 2019 and 2020. Last year, the Blazers made major strides, posting their first winning record since 2015. Back again in 2021 are Clara Lacek and Hannah Huddleson. The two seniors were All-Berks II selections a year ago, when they were the team’s top scorers.

Outlook: The Blues reach the Pennsylvania Independent Schools championship for the first time in 2019. Despite the loss of a loaded 2020 class, Hill already has five players destined for Division I — Maddy Orsi (North Carolina), Rease Coleman (Cornell), Hayley Gable (Kent State), Maggie Kondrath (Duke), Hala Silverstein (Michigan) — to help try and return the team win its first PAISAA State Championship and compete for a MAPL title. The Blues will also play in the Max Field Hockey Invitational in Conshocken. game for the first time ever in 2019, Hill looks to pick up where they left off with another competitive schedule. “Our goal is to work harder than we’ve ever worked before and push each other to do more than we thought was possible,” coach Jen Weissbach said. “With that level of hard work and commitment, Hill hopes to win its third MAPL Championship in a row and win its first ever PAISAA State Championship.

Outlook: The Warriors return nine of their starters from their 2020 PAC runner-up and District 1-3A semifinalist squad. The experienced group has its eyes on their first league title since 2017 and a trip to the PIAA playoffs that did not materialize last year due to a reduced state playoff field caused by COVID. “One position of strength for the team this season will be the connection they have,” coach Amanda Fuertsch said. “Not only is this a close knit group off the field, but the majority of the players have played together over the past two years. Each year they’ve gotten better, specifically in their communication on the field, and I think if all the pieces come together that the experience they have playing together could really be an asset to the team.”

Outlook: The Wildcats have an experienced core of juniors and seniors looking to make a run in the PAC, District 1 and state playoffs. Senior Rylee Laloup (Fairfield) was an all-area selection last year, while plenty of others are ready to step into bigger roles in 2021. “We have an athletic bunch who is ready to work hard and play hard this season,” coach Amy Hoffman said. “Players have put in a lot of work during the off-season and have showed up ready to learn and play. We have a core group of returning, experienced players from previous seasons, especially from our senior and junior classes, along with a talented group of younger players who are eager to play. This group has shown a lot of progress already and we’re looking forward to watching their continued growth throughout the season.”

Outlook: Former PV star Rachel Hamm, an all-state honorable mention in 2013 before a career at Quinnipiac University, takes over the Vikings this season. Hamm has 12 seniors on the roster, including 2020 first team All-Area selection Julia Downing — already committed to Division I Bellarmine University — Chloe Miller (New Hampshire) and Lauren Keyte (Quinnipiac). “We have a strong midfield line up that has the ability to come up with the ball and beautifully distribute it to keep possession and move towards goal,” Hamm said. “The coaches and the team all share the same goal in terms of winning and how far we want to take our season. That one goal in mind is going to allow us to work collectively to obtain that goal through hard work and determination.”

Outlook: Phoenixville played five games in 2020 after a delayed start to its season. With a number of players graduating over the past two seasons and not much to go off last year, the Phantoms are a bit of an unknown in 2021. Phoenixville hopes to once again compete for a PAC playoff spot. They last won the Frontier Division in 2018.

Outlook: The Golden Panthers were one of the teams that started their season late a season ago, so there is limited varsity experience to build off, but coach Lex Versak sees a lot of potential in her third season with the program. “This year we have a group of girls who have transitioned to our varsity team,” Versak said. “We also have two freshmen, Sarah Mink and Grace Mondillo, who made varsity. Our focus for this year is to work as a team, let the ball do the work, and play consistently from start to finish. In order to reach our potential, we need our girls to communicate on the field and to show up ready to win. Overall goals for our season is to improve in each game we have, and make the proper adjustments for each opponent. We have great competition in our division and we look forward to having a great season.”

Outlook: The Falcons return to Frontier Division play in 2021 after having a tough go of it against five Liberty Division squads and back-to-back champ Upper Perk last season. Mackenzie Johnson has been tested quite frequently in goal over the past two seasons. She and classmates Katie Bean, Lu O’Neill and Abby Hakes will try to lead a Pottsgrove team with only six players returning with varsity experience. “The girls have a lot of talent and most importantly, a great attitude,” coach Jodi Sproule said. “They are excited to play, and they know that this is going to be a season of hard work and development.  They are ready for and up to the challenge. … We are always striving for a winning season, and we’ve come very close to district playoffs, but have not yet made the cut. We’re hoping to do that this season.”

Outlook: The Rams return Mercury All-Area players Alexa Collins (Massachusetts) and Julia Corropolese. Spring-Ford will hope a blend of youth, experience and versatility provides the right formula to return the Rams to the postseason. “This season we are looking forward to competing in the PAC with hopes of making the playoffs,” coach Jennie Anderson said. “We are looking for our team to come together as a unit and be able to play consistent hockey each and every day. … We have a lot of players who can play multiple positions, which allows us to put many different combinations together on the field.  I believe our offense will be a strength for us since this is the position that has most of our returning players.”

Outlook: Even playing mostly against Liberty Division schools last season, the Indians distinguished themselves as the PAC’s best one again, winning back-to-back league titles. All-Area Player of the Year Bella Carpenter departs, but UP has five all-area selections in Luci Carpenter (Louisville), Takoda Wells (Saint Joe’s), Lynnsi Joyce, Kylene Gooch and Ashlyn Gatto as well as several others with significant experience from the last two championship runs. “(We have a) large group of returning starters, four which have been strong contributors since their freshman year,” coach Jamie Warren said. “Strong senior leadership and off the bench play, desire to compete every day whether in practice and game to work towards the goals we have set for the team are strengths. In union there is strength.’”