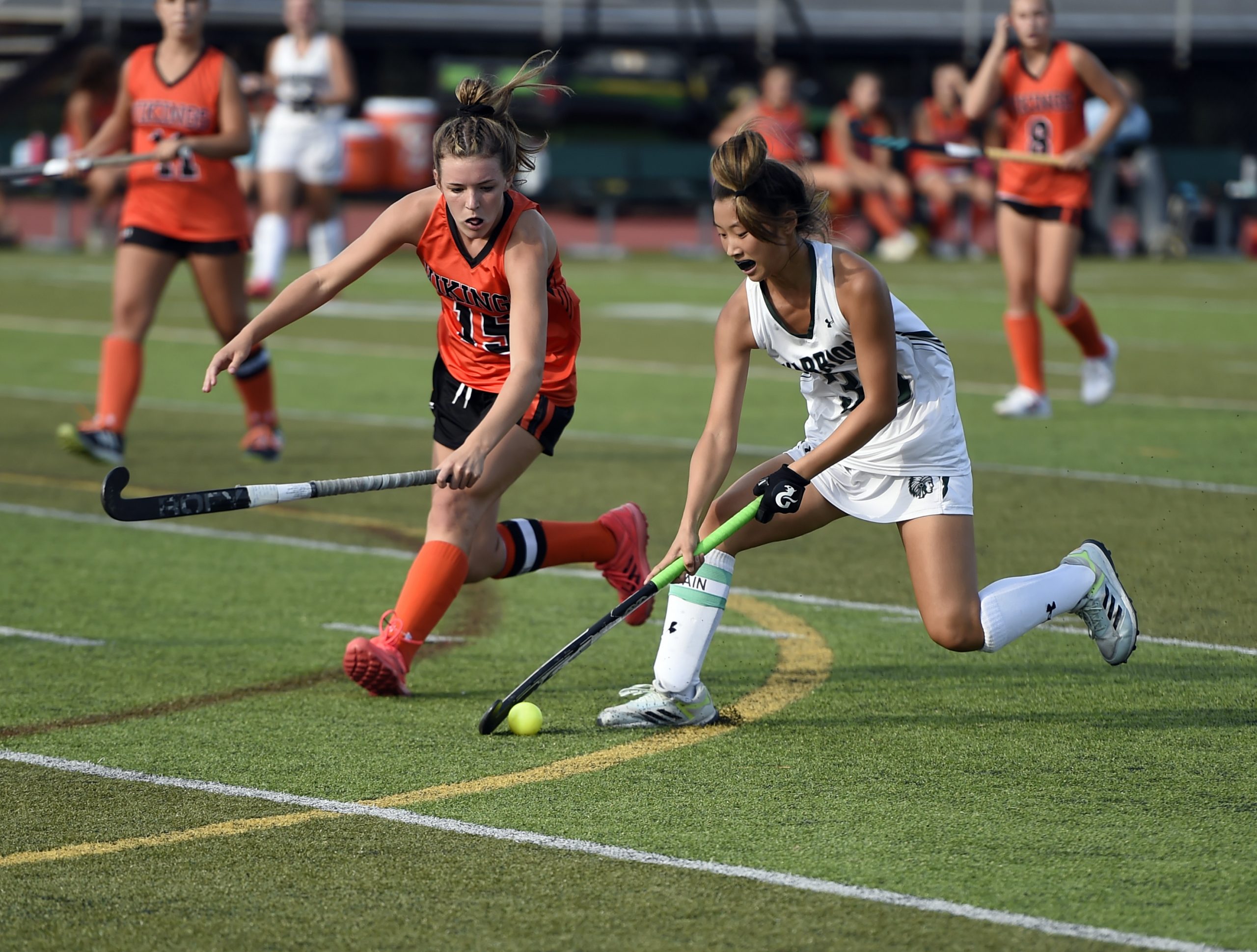 FAIRVIEW VILLAGE >> As Chloe Miller settled the ball and wound up her stick, she knew what happened next would likely decide the game.

After spending most of the contest defending near its own goal, Perkiomen Valley had its third straight corner attempt on Methacton’s net late in the fourth quarter of Wednesday’s Pioneer Athletic Conference Liberty Division contest. Miller didn’t want to let the opportunity slip.

Miller, a senior for PV, sent the ball just past Methacton goalie Gabby DiPrinzio for the first goal of the game by either team. Minutes later, Miller’s teammates chanted her name as they celebrated a 1-0 victory over the Warriors.

“I knew I had to get the goal to win the game, so it was a great feeling,” said Miller, a University of New Hampshire recruit.

Methacton (3-2, 1-1 PAC Liberty) controlled most of the game, earning 13 corners compared to four for Perkiomen Valley (4-1, 3-0 PAC Liberty). The Warriors also put 10 shots on goal compared to three for the Vikings.

But Perkiomen Valley found momentum late, earning its first corner of the fourth quarter with 7:35 left in the game and earning two more before Miller’s goal off an insert from senior Lauren Keyte with 3:40 to play.

“We just know that we have to capitalize on the opportunities that we have and keep the hustle up,” Miller said. “It was obviously a close game, the ball was on the other side of the field a lot, but we have to try and take advantage of what we had.”

After countless opportunities of its own squandered, Methacton made one final push in the final minutes of the contest. The Warriors earned three corners, but couldn’t find the game tying score.

“We didn’t play our game in the first three quarters,” Methacton third-year coach Amanda Fuertsch said. “We didn’t play at our normal speed and intensity. The reassuring thing about that is that we did have the ball at our offensive end the majority of the entire game, which is good because that means our skill is good, but as far as the intensity … we didn’t have that hunger to put the ball in the back of the net.”

“It was really intense and stressful and nerve wracking,” Downing said. “I stopped it right before the goal line and cleared it out.”

“We’re tweaking on things, working with her to get stronger defensively, but I think that her offensive ball handling is super helpful back there,” PV first-year coach Rachel Hamm said.

Along with Downing, Savannah Silvestre — another recently making the conversion to defense for the Vikings — played strong on the backline to ward off the constant Methacton pressure.

PV junior goalie Liz Gaffney made 10 saves for her fourth shutout of the season and third in a row.

“Liz is amazing,” Downing said. “Liz is such a great goalie. We’re so lucky to have her at PV.”

Coming off a 4-1 win over Owen J. Roberts and a 9-1 romp against Upper Merion, Methacton appeared poised to put up several goals again Wednesday when they earned three corners in the first quarter and continued that pressure throughout.

The stellar play of senior Kristen Riddell and junior Elise DeWan on the backline kept possession in PV’s end for most of the game and seniors Madison Noh, Elena Snodgrass and Jess Serafin were among those doing their best to maneuver the ball close to goal, but no one could get one past Gaffney.

Riddell, DeWan, Noh, Snodgrass, Serafin and DiPrinzio — who made two saves and kicked out a few other dangerous balls — along with seniors Bayla Plower, Celia Long and Benee Catoia, junior Nicole Uebele and sophomores Lily DeWan and Renee Blake all return from last year’s PAC runner-up and District 1-3A semifinal team.

Wednesday’s loss was a setback but the experienced group has aspirations of hoisting hardware at the end of this season.

“I think last year, all these girls who did return got a taste of what that feels like and it made them want it anymore,” Fuertsch said. “I really see the drive and determination in this group a lot and it’s really great because it’s trickling down to the underclassmen.”

In her first season at the helm of her alma mater, Hamm — who played collegiately at Quinnipiac University — took over a team that finished one spot behind the Warriors in last year’s seven-team PAC.

The Vikings have 12 seniors spread throughout their lineup — senior forwards Kayla Minkon and Kiki Rotay tested the Warriors’ defense a few times on the break Wednesday — and also have aspirations of postseason runs in the PAC and beyond.

The Vikings a hope a win like Wednesday’s — their fourth in a row — can be a momentum booster as they face a difficult stretch with Owen J. Roberts, Boyertown and Upper Perkiomen all scheduled within the next week.

“It builds confidence, definitely, playing a tough team like these,” Miller said. “It gets everybody excited for the rest of the games. We know we have the goal to win the PAC this year, so this really adds to that.”