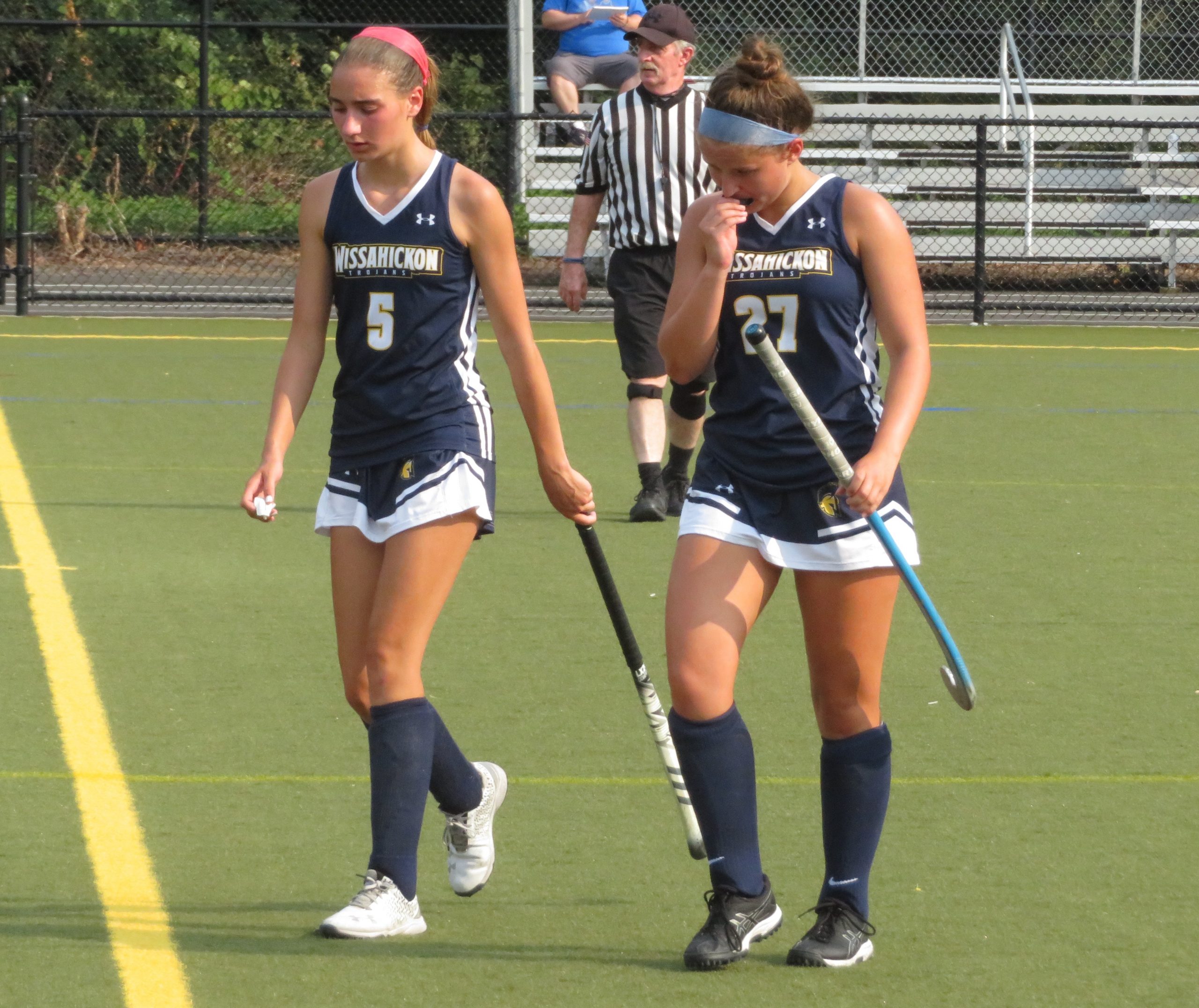 Wissahickon's Kendall Crowley, left, and Ella Hummel walk off the field at halftime during a game against Abington. (Ed Morlock/MediaNews Group)

ABINGTON >> Wissahickon juniors Ella Hummel and Kendall Crowley have been playing together for four years and their chemistry was on full display Tuesday afternoon.

The two forwards combined for four goals and three assists in a 5-0 Suburban One League Liberty Division win over Abington at Abington Memorial Field.

“We’re pretty good friends,” Hummel said. “I feel like the reason we have such a good connection is because we do a lot of team-bonding outside of practice. Everyone’s really good friends with each other, so even if we aren’t playing the best we can connect with each other on that sort of level.”

“On the field they do look for each other,” Wissahickon head coach Lucy Gil said. “They’re in spots – Kendall is the center-forward and Ella plays either right or left-forward – so they know they’re feeding each other and they also know that Ella is super-fast and can get to any ball. Then it always comes across for Kendall. They connected really nicely today.”

The two got the scoring started less than five minutes into the game. Hummel inserted a penalty corner and the play ended with her finding Crowley for the Trojans (3-0, 2-0 SOL Liberty) 1-0 lead.

They connected again in the second quarter to double the advantage. Crowley stole the ball on her own side of the field and she was off to the races along the left sideline with Hummel in the middle of the field. The two were closing in on Abington’s cage with a defender close behind. Crowley sent a pass to Hummel, who shot back towards the left side. Crowley deflected it into the cage for a 2-0 lead.

“We work on (those fast break opportunities) a lot in practice,” Hummel said. “I feel like our offense has a lot of speed, so we get those pretty commonly. We wouldn’t get those without our strong defense taking it out.

Riley Ball scored – courtesy of Brynne Miller – in the third quarter to make it 3-0, and then Hummel and Crowley were back at it in the fourth. Crowley set up Hummel for a score before scoring herself – courtesy of Kayla Pak – to close out the win, 5-0.

The Ghosts (2-1, 1-1 SOL Liberty) best chance at scoring came in the first quarter, when Camryn Stewart ripped a reverse hit towards the cage. It got past Wissahickon’s goalie, but hit the crossbar and bounced out of harm’s way.

“It’s a game-changer,” Abington assistant coach Jamie Fitzgerald said. “That’s momentum. That’s confidence. That totally could have changed the game. She works on that shot, she works so hard. One of those is going to go in. I’d rather it hit the crossbar early in the season and go in a couple games down the line.

“Wissahickon’s a great team and they challenge us every year and I think we get better just by playing them. I think we hung with them for at least a quarter and we showed them we can play at that level. We just need to work on really being able to sustain that level of play. I think playing a team like Wissahickon sets us up for playoffs and things like that.”

Abington’s next best scoring chance was in the fourth quarter, but Wissahickon defender Julia Schools was in position for a defensive save.

The Ghosts put seven shots on the cage, but Wiss goalie Alli Wood held them scoreless. Other times Abington got into Trojans territory, the Wiss defenders kept them from getting off high-percentage shots.

“I’m very proud of my defense,” Gil said. “They’re strong defenders, but we haven’t really been tested all that much. I was very glad to see that when Abington came down we were able to get the ball out and out wide. Everybody was doing their job, which is what we have to ask of them.”