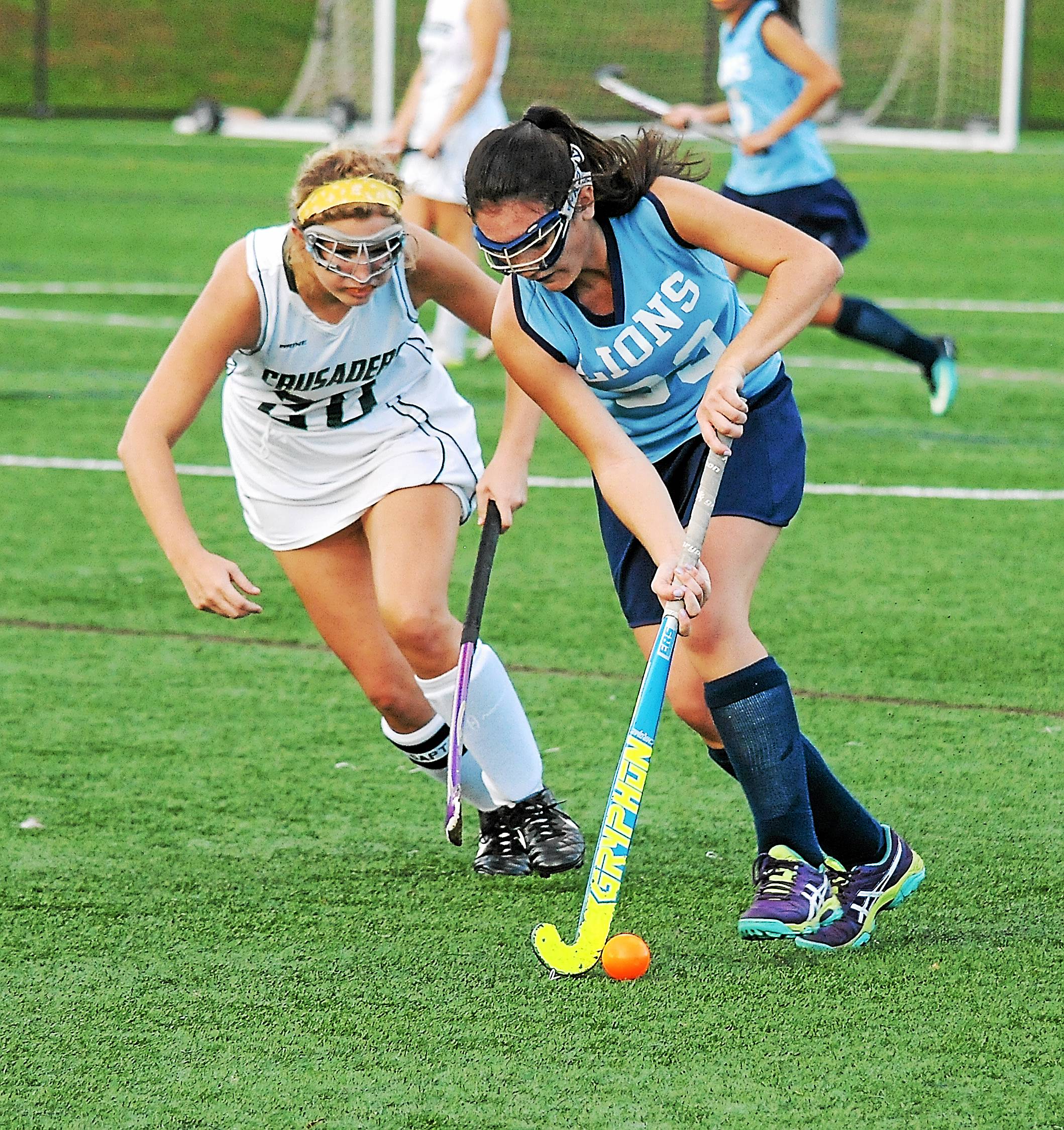 If you look through the Lower Moreland field hockey history book, you’ll find one name that keeps showing up on the top of lists – Taryn Mayer.

Mayer is the Lions all-time leading scorer with more than 100 goals. She holds the freshman, sophomore, junior and single-season scoring records.

Her freshman year started playing alongside her older sister, Jamie, who was a senior. The two helped lead Lower Moreland to its first ever state playoff berth.

“Jamie played center midfield while I played center forward,” Taryn Mayer, who was a second team All-Bicentennial Athletic League selection in ninth grade, said. “We were able to connect in the circle and give each other lots of scoring opportunities. I would not have been able to break the freshman scoring record without Jamie’s help and support.”

Taryn Mayer set a goal after her freshman year to break every scoring record she could. She got off to a fast start in 10th grade, breaking the sophomore record in just nine games. Unfortunately her season was cut short due to a neck injury. She still earned first team All-BAL honors.

She returned to the field her junior year and had the highest-scoring season in program history and earned a second-straight first team All-BAL selection.

“Prior to my junior season, the career scoring record stood at 96 goals, held by 2015 alumnae Lindsey Boerner,” she said. “I wanted to see how hard I could push myself in order to break 100 goals in only three years. With lots of planning and constantly reminding myself of what I was working towards, I was able to break the junior, single-season, and career-scoring records before playoffs began.”

As a senior with a shortened season this fall, Mayer shifted her focus from scoring to fine-tuning her skills and helping her teammates improve. It was Lower Moreland’s first season in the Suburban One League and she earned first team All-SOL Freedom Division honors.

“I am incredibly grateful for the opportunities Lower Moreland Field Hockey gave me and am grateful to leave an impact on the team,” she said.

Mayer’s love for field hockey goes back to well before high school. Her mom played college field hockey and coached, taking her to high school games before she could walk. She also watched her two older sisters play and both reached the college level.

“My mom and sisters definitely paved the way for getting me where I am today because I was able to have incredible examples of dedication, fitness, and skill right in front of me,” she said. “Being the youngest of two accomplished multisport athletes, I had a competitive nature instilled in me from a young age. There is no such thing as a leisurely practice at the turf with my sisters, as it always turns into a micro-scale game/competition. However, I am incredibly grateful to be raised in such a competitive environment because I had to find the love for the game myself and find my own motivation.”

Mayer’s name will also show up under the “Team Captains” and “Team MVP” chapters of the Lions history book. She held a captain position and was named the team’s Most Valuable Player in each of her final three seasons with the Lions.

“Being a sophomore captain was a great honor, but it did not come without its hardships,” she said. “My sophomore season was a completely different team, since the year prior we graduated six starting seniors and had a change in coaching staff. As a sophomore captain during a rebuilding season, I brought a new perspective and style of play in the midfield. During my junior year I found myself in a different position, since I knew what to expect as a team leader and how to separate team goals from personal goals. My senior season my responsibilities changed because I focused more on preparing the underclassmen for after I left the team. Since we had such an unconventional season, I focused more on the experience the girls had and growing their confidence in their own game.”

After her senior season, Mayer committed to James Madison University to continue her education and field hockey career.

“I chose James Madison University because of the beautiful campus, strong academics, and sports-oriented atmosphere,” she said. “I love the culture that Coach Christy Morgan creates amongst the team as well as the speed and style of play. I believe that JMU contains the resources that will allow me to not only grow as a field hockey player, but also as a person. My oldest sister, Corey, was a part of the team and was completely brought into the culture of the school and team, which made me want to be a Duke that much more!”

Mayer hopes to have winter and spring seasons with the Mystx Field Hockey Club before heading to Harrisonburg, Va. this summer to take classes, get familiar with the campus and start training with teammates.