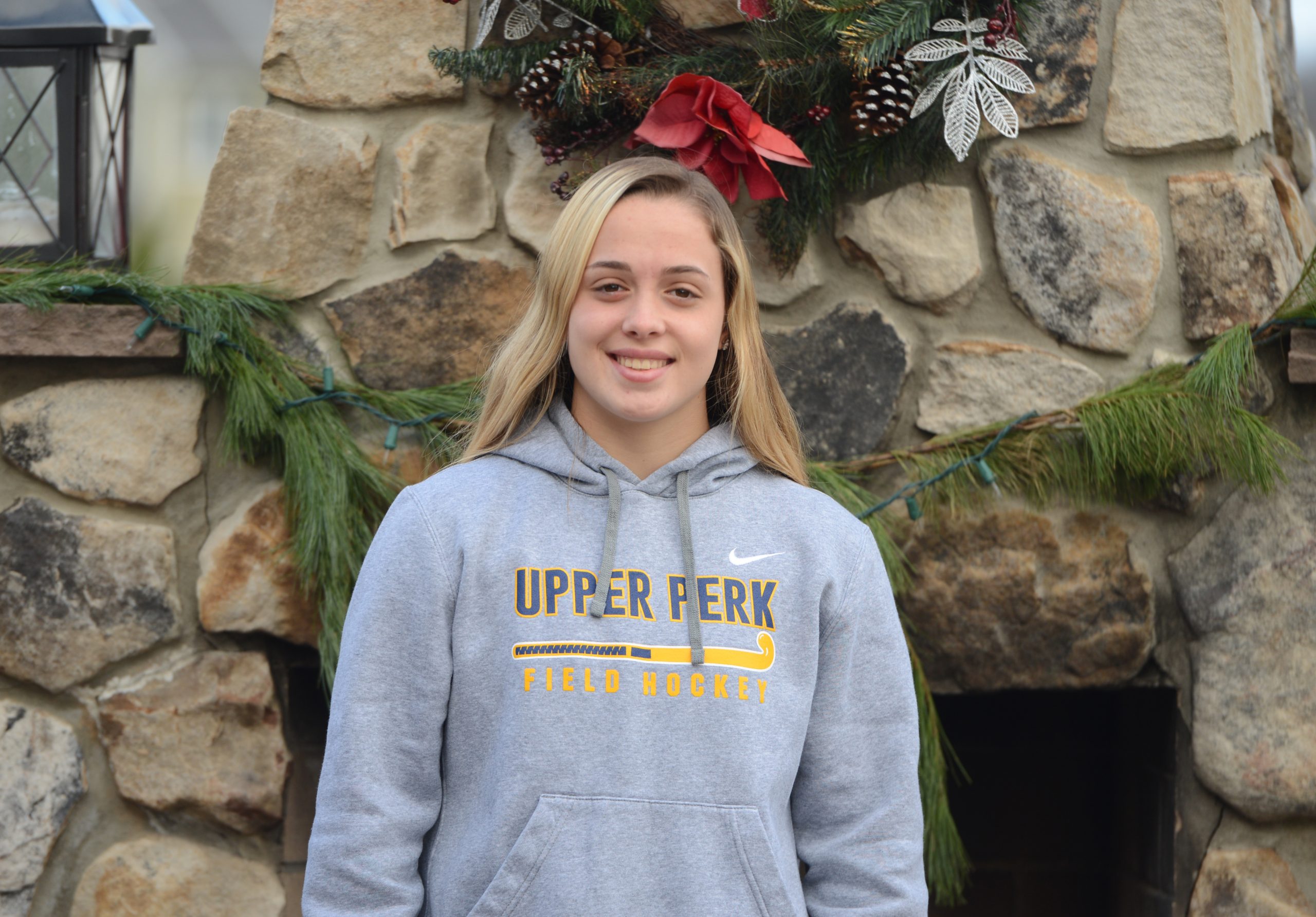 Upper Perkiomen field hockey coach Jamie Warren told her team early this season she was looking for a ‘game changer.’

With the departure of AiYi Young, the 2019 Mercury All-Area Player of the Year now at UConn, the Indians needed to find someone to ignite their offense if they hoped to defend their Pioneer Athletic Conference title.

After playing on UP’s back line with her sister Luci for the previous two seasons, Carpenter moved up to a center midfield position in her final year.

She embraced the role, scoring 12 goals and seven assists in 14 games to help lead the Indians to a second straight PAC championship and a spot in the District 1-2A semifinals.

“I feel like I had to step into (AiYi’s) shoes a little bit and help our team a little more,” said Carpenter, the 2020 Mercury All-Area Player of the Year. “I tried to take her role of being a leader not always with my words but with my play like she did.”

Warren wasn’t sure about moving Carpenter up to the midfield before the season because of how strong she’d been for Upper Perk’s defense during her sophomore and junior campaigns.

But with a strong backline that included Luci and junior goalie Lynnsi Joyce, both All-Area first team players, Warren felt comfortable trying to get more out of Carpenter on the offensive end.

The position change wasn’t entirely new for Carpenter. She plays all over the field for her club team XCalibur and her future coaches at Kent State are excited about her versatility. During her recruiting process, coaches told her she could play pretty much anywhere other than goalie.

“I think it took her a little bit to get used to it, but I think when she got used to it, she really enjoyed playing that position and was the spark to our offense,” Warren said. “She was always strong for us on our corner offensive unit and our corner defensive unit.”

Carpenter’s ability to embrace her new role and spark the Indians’ offense was also noted by her sister.

“She stepped up her game a lot this year,” Luci Carpenter said. “Last year, we had AiYi who was the big playmaker on the team, but when we lost her we needed someone to step up. She took that role and she was able to make a ton of important plays this year.”

With a reduced number of teams competing in the Pioneer Athletic Conference this season, the league dropped its two-division format this season. Upper Perk and Pottsgrove were the only schools from the small-school Frontier Division in the seven-team league.

The challenge excited Carpenter, who relished the opportunity to compete against the bigger schools in the league two times each. The Indians finished with a 9-1-2 record in the PAC this season, finishing a half game ahead of Methacton for an outright league title.

“I think we did a good job stepping up because we are a small school compared to PV, OJR and Methacton,” Carpenter said. “We had the ability, and we know that because every year we compete with them, and I think we know that all those games will be tough but we can do it.”

Part of what Warren was looking for this season when she mentioned the Indians needing a game-changer was a player to find a way to impact big games in big moments.

Carpenter certainly fit that description, finding ways to make plays for Upper Perk in some of the defining games of its season.

In the team’s first of two draws against Methacton, Carpenter came up with a key defensive save and nearly set up a potential game-winning goal late. The second time the teams met Carpenter’s goal with 1:47 to go sent the contest into overtime to preserve a tie and first place for the Indians.

“I think her strongest games were when we were playing stronger teams,” Warren said. “She was challenged more and I think she rose to the challenge. … And this year all our games were strong.”

“She really stepped up in those Methacton games,” Luci Carpenter added.

Against Owen J. Roberts in the final regular season game, Carpenter’s deflected shot off a corner was buried by teammate Sarah Steinman to clinch a 2-1 victory and the program’s first back-to-back titles since 2005 and 2006.

Carpenter and her teammates were unable to defend their title in the traditional league postseason format, but they still appreciated the chance to hold up a PAC title plaque at the end of their season for the second year in a row.

“I think it was special, especially because it was my last year. Our seniors really wanted it,” Carpenter said. “It wasn’t what we expected this season, but I’m just glad we got to play and play for a PAC title.”

A four-year varsity player for Upper Perk, Carpenter didn’t receive all-league recognition until she was named to the All-Frontier second team as junior last season. She saved the best for last earning first team all-state, all-league and all-area honors as a senior.

Her growth of the last four years will leave another big pair of shoes to fill at Upper Perk and have Warren searching for a game changer once again next season.

“If I could sum up Bella, she’s been very consistent for our program, which is important,” Warren said. “She was one of those players who grew each year into the position that she was playing and also grew in her leadership role. And she’s an athlete. When you have an athlete, and they have a desire to do well, they can do well.”