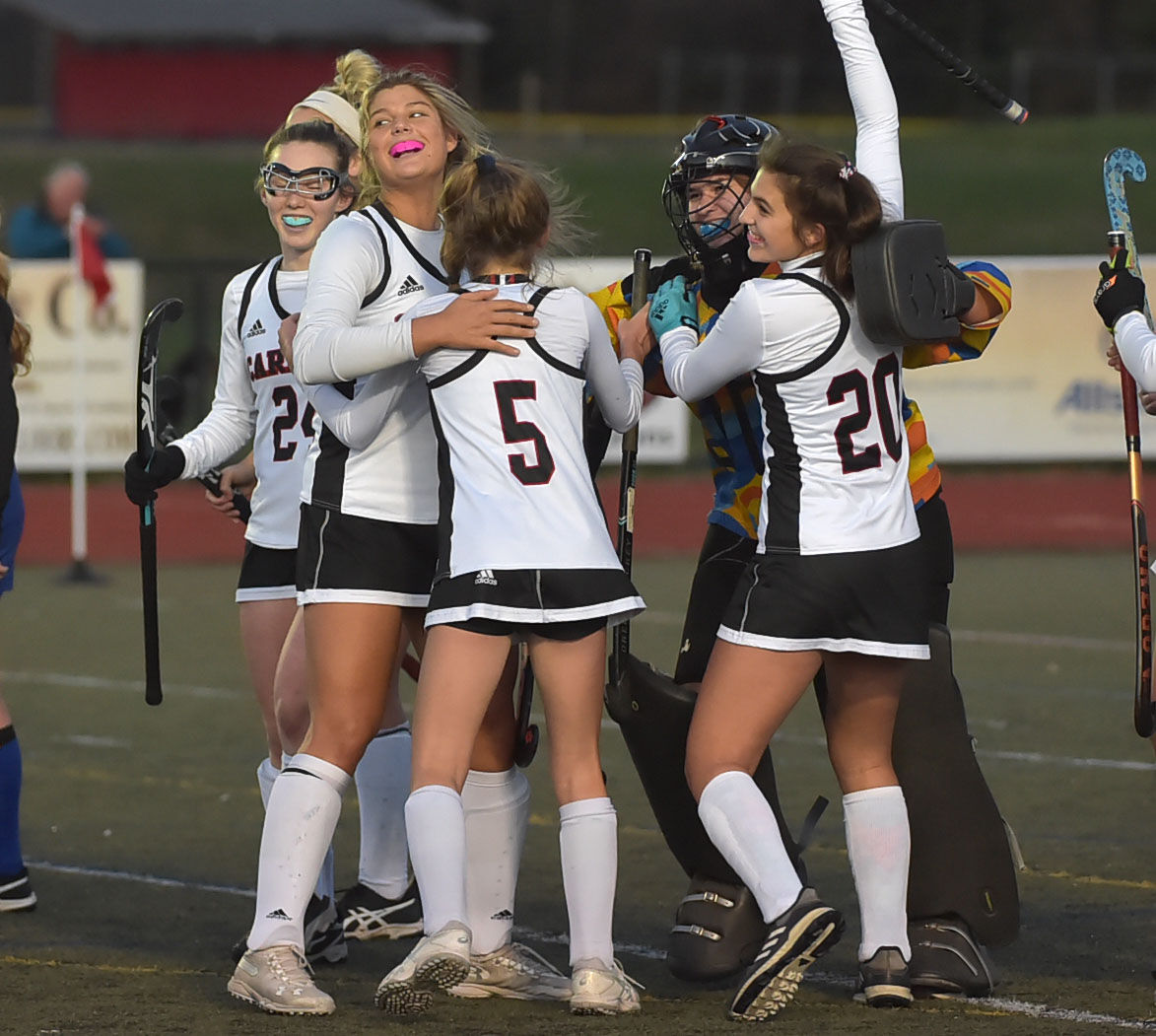 MARPLE — There were things that disappointed Archbishop Carroll field hockey coach Christina Elisio Tuesday as she watched her team take on District 11 champion Southern Lehigh in a PIAA Class 2A semifinal match at Cardinal O’Hara High.

As the sun set and the chilly afternoon turned into a cold night, Elisio and her Patriots found enough silver linings with which to head home happy.

Carroll (10-1) scored a goal early in the game and another early in the fourth quarter and held on for a 2-0 decision. The Patriots will thus play for a state championship at 12:30 Saturday at Whitehall High’s Zephyr Sports Complex.

Archbishop Carroll is the first Philadelphia Catholic League and District 12 team to qualify for a field hockey state final and the first team from Delaware County to make it to the title round since Ridley faced Methacton in the 1995 Class 3A championship match.

“It was raining a little bit, then it was sleeting a little bit and it was windy,” Elisio said in describing some of the conditions the teams had to endure Tuesday. “We weren’t playing as well as we had played when we beat Villa Maria (last) Saturday. We did see a rainbow at one point, and I guess that meant we were due for some good luck.”

Goals by sophomore Cate McConaghy, assisted by junior Grace O’Neill, and senior Julia Kingsbury, completing a nifty play in which freshman Sienna Golden earned an assist, were the result of hockey skills rather than luck.

Senior goalie Courtney Keith got in the way of a dozen Spartans shots to earn the shutout. She had a lot of work to do in the third quarter, when Southern Lehigh (13-2) earned six penalty corners and a pair of long hits, and she was up to each challenge she faced.

“We watched films of that team,” Elisio said. “We know there are some good hockey teams up there. This wasn’t our best game. There were times when we weren’t working together and there was no (communication) out on the field.

“The thing is we won here today. So we have three days to practice, then we get to play one more time.”

All-Delco basketball player O’Neill helped get the scoring started for the Patriots when she took a shot off a penalty corner in the fifth minute of play.

“I hit it, but Cate McConaghy actually tipped it in,” O’Neill said. “We’ve played through everything that has happened this season, and now we get to play another game. And that game will be on television.”

O’Neill was a freshman when she was a member of a Carroll basketball team which played for a state championship in a game also televised by state cable network PCN.

“That was awesome and this is awesome,” said McNeill, a Drexel basketball commit. “We couldn’t play for the (Catholic League) championship this year, but now we’re playing for the state championship. The girls on this team are so close and have wanted to make this a great season.”

Seniors Carleigh Conners and Karli Dougherty, sophomore Megan Sheridan and freshman Golden made their presence felt in the midfield and the defensive zone in support of goalie Keith.

In the fifth minute of the final quarter, Kingsbury and Golden took the ball up the right side of the field, and it was the senior Saint Joseph’s University commit who finished the play with the second Carroll score by tipping the ball into the corner of the cage.

“That was good going ahead, 2-0,” Kingsbury said. “Things could be a little shaky only being up 1-0. We knew after we lost in states last year that we were losing some great seniors. The thing was to come back and work hard to make this a great season.

“Finding out late like we did that we were going to be able to play was tough. We did what we had to do. Today we didn’t know a lot about this team because we had never played them. We just had to take our shots and make sure we had someone who was following up on them.”

Elisio turned to the long-range weather forecast as she looked ahead to Saturday.

“I hear that’s supposed to be a nice day,” she said. “I hope we play well then and can be happy and smiling when the game is over.”