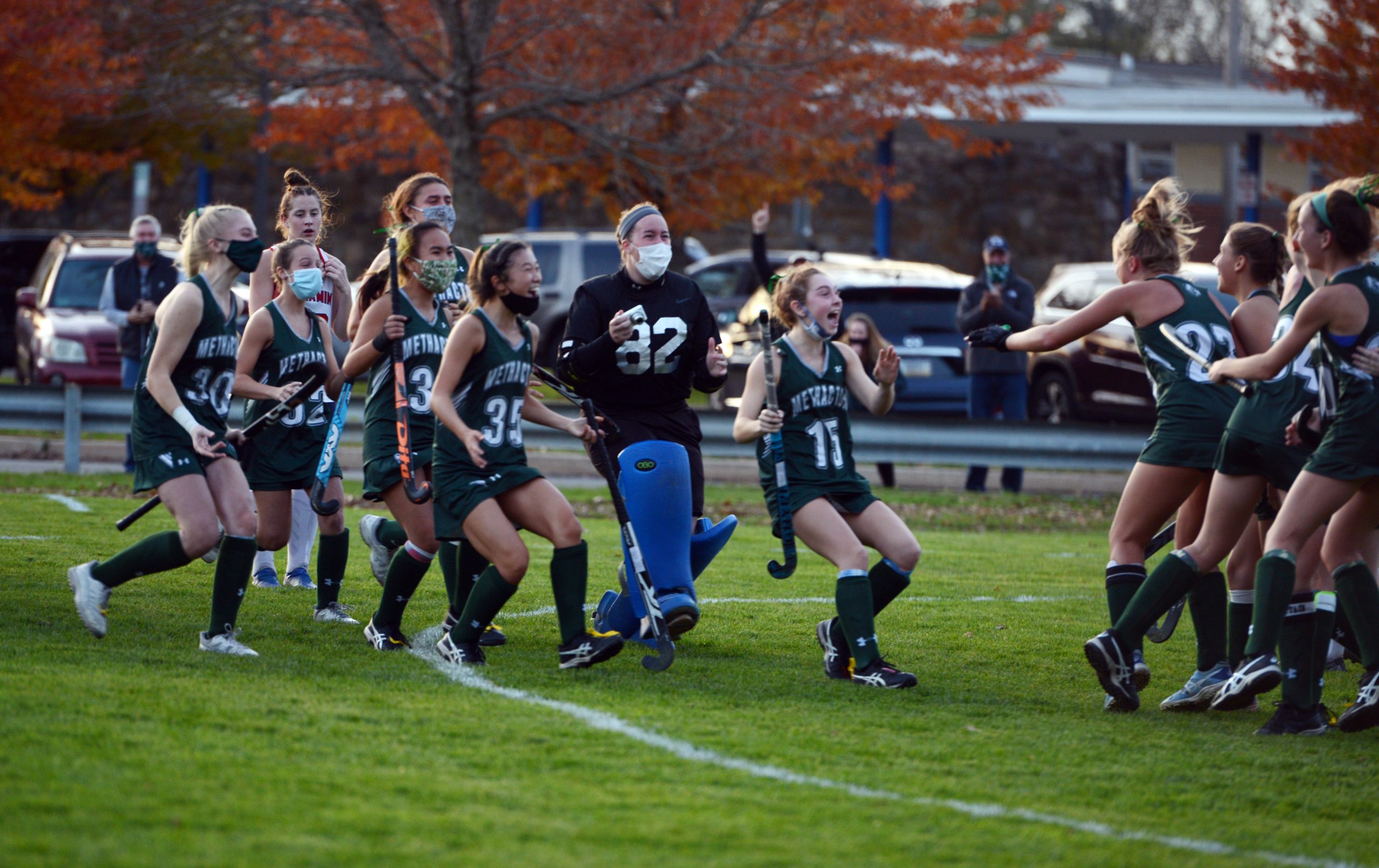 LANGHORNE >> Though Grace Shields wouldn’t consider herself the likeliest of heroes for the Methacton field hockey team, she played the role perfectly Thursday evening.

With four minutes, 22 seconds left in overtime, Elena Snodgrass passed to Shields in front of the goal. Shields put it past the diving goalie to give No. 7 Methacton a 2-1 upset win over No. 2 Neshaminy in the District 1-3A quarterfinal.

The Warriors will travel to face No. 3 Plymouth Whitemarsh, a 1-0 winner over Kennett, in their second district semifinal in three seasons on Tuesday.

“I was just thinking that I had to put it in,” Shields said of what was going through her head when she had the ball in front of the cage.”

“I never score that much, so it was just really exciting,” she added.

The Warriors’ season was on the brink of ending around the five-minute mark in Thursday’s game.

Neshaminy turned a beakaway into a score when Aralyn Hackney tipped in a pass from Madi Neiman with 5:11 left, breaking open a scoreless game and giving her team a 1-0 lead.

Methacton rallied, earning a corner soon after and the Warriors capitalized on the opportunity. Alexa Kratz’s shot attempt on the corner deflected high into the air off a defender’s stick, shooting toward the right goal post where Bayla Plower knocked it in to tie the game, 1-1, with 3:31 to play.

“I feel like we had a lot more intensity once they scored,” Shields said.

Methacton put just two shots on goal in the game — both of them finding the back of the goal — compared to six for Neshaminy. The teams were tied 7-7 in corners, though Plower’s goal late in regulation was the only insert turned into a goal throughout the game.

Thursday’s contest played out similarly to Neshaminy’s first round win over Owen J. Roberts, when it conceded a late-goal in regulation before regrouping and scoring in double overtime for a 2-1 win. This time, however, the No. 2 seed couldn’t find the winner.

“We had our chances. We needed to score when we had opportunities and it didn’t happen,” Neshaminy coach Jamie Pinto said. “They played hard. Scoring in the last minute or so, that hurts, but we needed to come out in overtime ready to play. We played well in overtime. We just came off a double overtime victory. We played overtime in the season and won. It just didn’t work out for us today.”

In contrast to Neshaminy, Methacton had not had a lot of overtime success this season.

The Warriors failed to score an overtime goal in three chances this season, resulting in ties to Upper Perkiomen (twice) and Perkiomen Valley.

Along with Shields, Methacton coach Amanda Fuertsch noted the efforts of Kratz in the midfield and Madison Noh up front in helping put the pressure on Neshaminy, which was particularly apparent in the second half.

Kristen Riddell played all over the field, moving to the back late to keep Neshaminy from breaking through for the game winning goal. Making her varsity debut, Delaney Smith also impressed for the Warriors.

“They have a ton of resilience,” Fuertsch said. “That was our fifth overtime this season, So the fact that we have gone and played in that many I’ve times and haven’t scored in any of them yet to do that proves they really wanted this. It could have gone the other way but they made it happen. They wanted and they showed that they wanted by putting that ball in the goal.

Neshaminy, which hadn’t played in a District 1 quarterfinal since 2015, ends its season with an 11-2 record. Neshaminy won 10 straight games to open its season before falling to Wissahickon in its regular-season finale.

Beegal, Neiman and Kaelan Davies are among the seniors Neshaminy graduates this season.

Methacton’s district semifinal trip would have clinched the Warriors a spot in the PIAA playoffs in seasons past, but in a reduced state playoff bracket the Warriors will have to continue reeling off victories to keep their season alive.

With a win against PW, the Warriors would advance to their first district championship game since going in consecutive seasons in 1995 and 1996. Methacton hasn’t won a District 1 championship since 1989, when the Warriors defeated Neshaminy for the title.

“I feel like this year the girls really put in the work and know they put in the work,” Fuertsch said. “They’ve been reflective about how and where they need to put more work in. I think that reflective piece is really what pushes a team to that next level because you can be good and you can be skilled and you can go out and win and score goals. But if you don’t reflect on what you’re doing individually and as a team, you’re not going to get to that next level.”

Notes >> The PAC has now had a semifinalist in District 1’s largest classification for four straight seasons.