Plymouth Whitemarsh holds off Kennett in District 1-3A quarterfinals 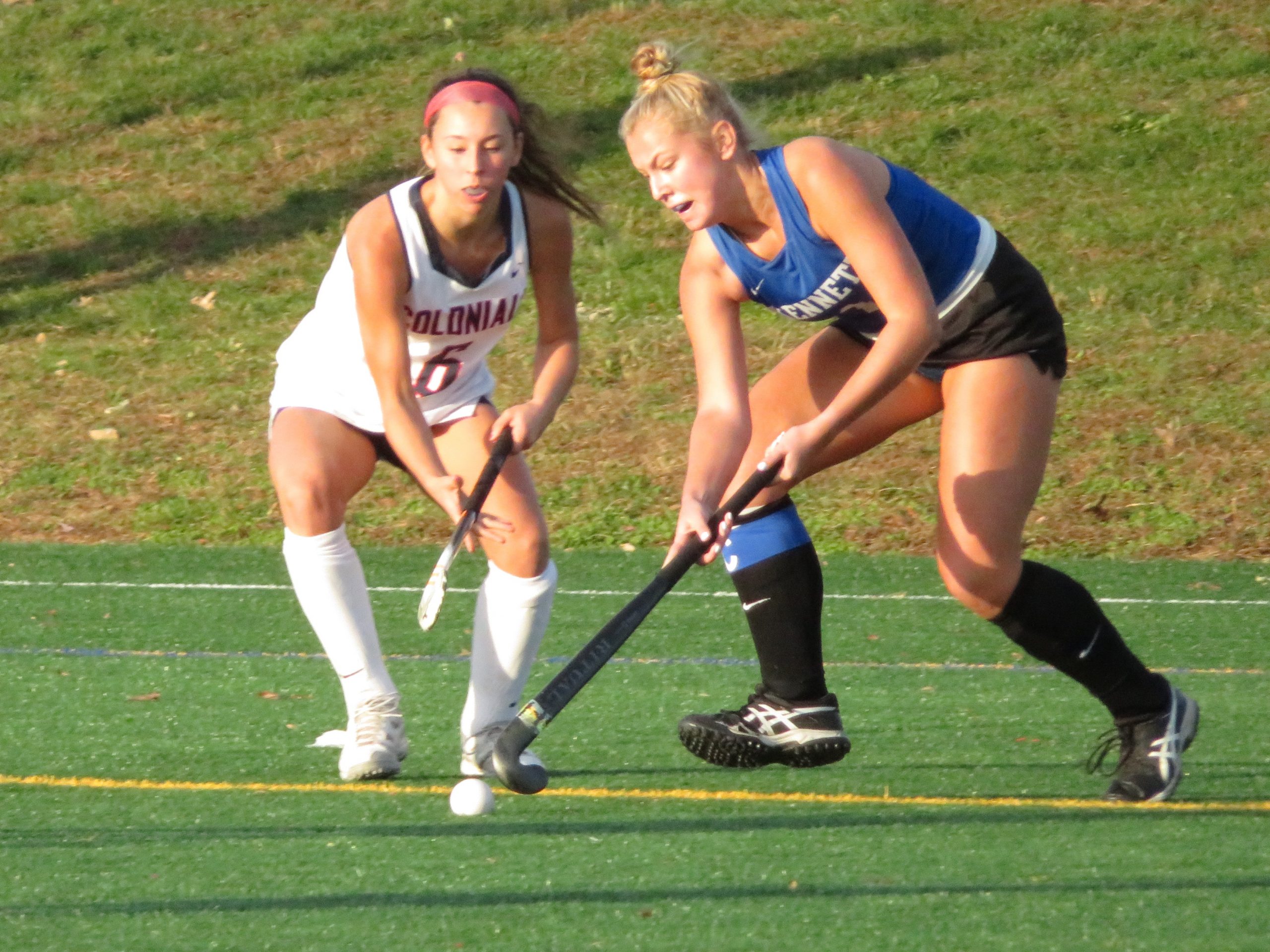 WHITEMARSH >> Plymouth Whitemarsh couldn’t celebrate when the final horn sounded and they held a one-goal lead over Kennett in the District 1-3A quarterfinals Thursday afternoon.

After keeping the Blue Demons off the scoreboard for 60 minutes, the Colonials had to defend a penalty corner when the clock showed zeroes.

The initial shot was blocked and the chase for the ball went to the right of the cage. As PW tried to clear and Kennett tried to center, the ball rolled just over the end line to end the game and the third-seeded Colonials celebrated their 1-0 win over the sixth-seeded Blue Demons at Plymouth Whitemarsh High School.

“We said, ‘just clear it, get it out,’” PW junior Hailey Copestick said. “I would have taken another corner as long as it’s not a goal, just make sure you clear it out. The play is dead afterwards.”

The game’s final play was a microcosm of the entire fourth quarter. Kennett dominated the final 15 minutes, maintaining possession deep in PW territory for the majority of the frame and earning five penalty corners to zero for the Colonials.

“We were just talking about clearing it out wide,” Copestick said of PW’s fourth quarter defense. “Not messing around and trying to dribble. Just get it out of bounds, reset and then let them take it. Just make sure we block up our circle. It worked out for us.”

“We had the opportunities,” Kennett coach Meghan Shumway said. “They were there. We couldn’t connect. I think we did everything we could to finish today and the cards just weren’t in our hand.”

The Colonials (12-0) were able to keep a clean sheet despite spending most of the game on the defensive end. Defender Darcy Miller made a pair of big plays in the second half – a defensive save in the third quarter and slowing Kennett fast break opportunity in the fourth.

“I thought our center-back Darcy Miller played a really solid game,” PW coach Charise Halteman said. “I think (the defense) kept their heads about them even though I don’t think it was our best play today.”

PW scored the game’s only goal in the second quarter. Copestick inserted a penalty corner to Kaleigh Missimer, who sent the ball towards the cage. Ava Borkowski redirected the ball in front of the net and Copestick was there at the post to put it home with 8:15 left until halftime.

“Ava is always in there to create havoc and try to tip it in,” Copestick said, noting the play wasn’t designed to come her way, “but sometimes I pop out wide. We just have that extra play and it worked out today.”

It’s the second straight 1-0 win for PW this postseason after beating Avon Grove by the slimmest of margins in the first round. The Colonials postseason experience reaching the District 1 championship game in 2019 could have been a factor in how they handled the intensity against a young Kennett team.

“Our district semi last year was a 1-0 game with Owen J. Roberts,” Halteman said. “We’ve definitely been in these positions before. We’re certainly always wanting to put more on the board and that seems like a strength of our team to score. We want to continue to work for that, but we really focus on playing as a team and staying disciplined and those messages keep them calm and keep them together despite when things aren’t really going our way.”

“(PW) looked really poised out there,” Shumway said. “They never seemed rattled. That’s how our side felt. Even though I felt like we had a lot of possession and it was a very evenly-matched game, I think that we didn’t quite have that experience to know how to handle the pressure.”

Plymouth Whitemarsh will host No. 7 Methacton, a 2-1 overtime winner over No. 2 Neshaminy, in the semifinals Tuesday Nov. 10.

The Blue Demons (8-2) season ends with the loss.

“It was a fantastic season,” Shumway said. “I have a small group of seniors, but a great group of seniors that we will miss a lot. This gave us a chance to come together as a team and work through – even though we didn’t have a long season – we had some kinks to work out. We worked through them early on and I thought we did a fantastic job this season.”