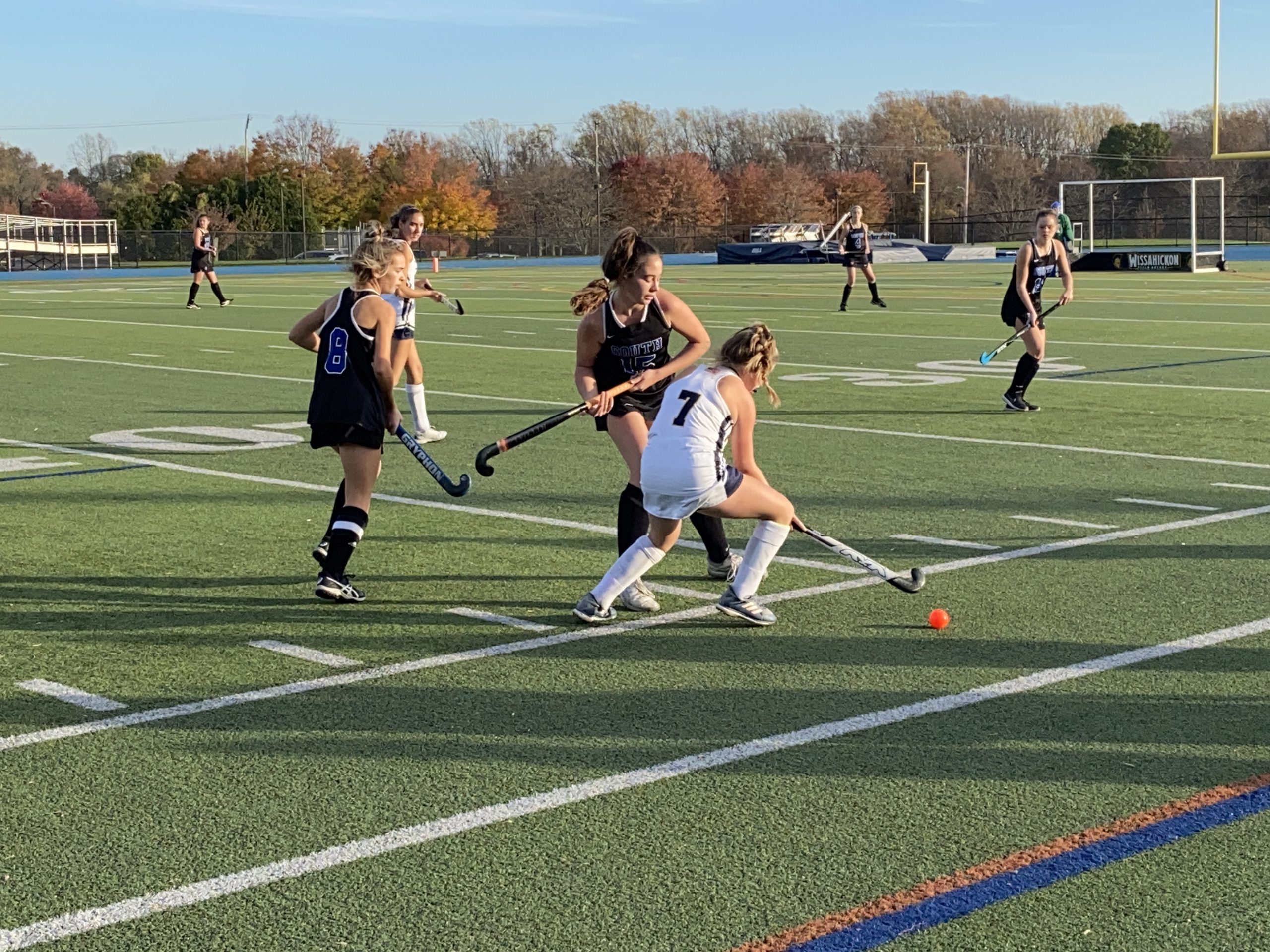 Wissahickon's Sophia Havrilla (7) tries to get around Central Bucks South's Julia Cooper (15) during their District 1-3A quarterfinal on Thursday, Nov. 5, 2020. (Mike Cabrey/MediaNews Group)

Thursday afternoon, the Titans earned their place in the District 1-3A semifinals.

“We ended up getting bumped the very last day to 17, so I was telling them I was sorry that their season was over and I wished I could of done something differently for them,” Toner said. “And as I was saying it we bumped back up to 16. So we just got in at the very end.”

South grabbed the 16th and last spot in a district field truncated due to a season played during the COVID-19 pandemic. But now the Titans are one of the last four squads remaining after pulling off their second-straight upset – Erin Smith scoring off a corner in the first quarter and South holding off host No.8 Wissahickon to claim a 1-0 quarterfinal victory.

“This was a very difficult game but I think that we managed to just play as a team, keep our composure,” the Titans’ Julia Cooper said. “And just this entire playoffs we’ve been telling ourselves we have nothing to lose so might as well just come out on the field and play our hearts out.”

Cooper had the assist on the game’s lone tally – cracking a ball from the left side of the circle that Smith tipped into the cage at 8:20 of the opening period.

“Normally it’s supposed to just try and get it in the circle, see what happens and that’s basically what happened,” Cooper said. “Erin had a beautiful tip and that’s all we can hope for.”

Wissahickon out-cornered South 7-5 while senior Aiden Drabick made a number of dangerous runs but it turned into a frustrating finish for the Trojans, who were shut out for just the second time this season.

“This is that kind of game that every coach hates, right, because we were aggressive to the ball, we were doing all the right things and then they get really frustrated and towards the end we were making a lot of mistakes,” Wissahickon coach Lucy Gil said. “So we don’t hit the ball to somebody else, we don’t make good passes, we don’t make good decisions.

“But, I mean, they did everything right so I can’t yell at them, I can’t be mad at them, they were playing their hearts out and it was unfortunately that we just couldn’t pop one in.”

“They themselves said they didn’t think they played particularly well, but I think sometimes it’s hard to go from beating a first-place team,” Toner said. “And that was such an exciting win to get yourself back up and we just did not have the connections that we usually have.

But Wissahickon’s very good, they have some very dangerous players and I think we were too worried about what they were going to do instead of doing what we’re capable of doing. Their players are very, very strong, their goalie’s very good too.”

“It was definitely stressful switching on and off 17th and 16th but when we figured out we were going to be 16th we were like, ‘OK, let’s make the most of it,’” Cooper said. “So we’ve clearly done that the past two games and hopefully we can do that the next game.”

Wissahickon, trying for its first district semifinal appearance since 2012, ends its year at 12-5-0.

“It’s a shame because it was such an amazing season,” Gil said. “And the fact that we weren’t even supposed to have one so it was like a dream. And then it’s unfortunate that it had to end.”

Central Bucks South scored on its second penalty corner, which the Titans earned off their first corner.  Cooper sent a ball towards the far right post with Smith – who cut behind the outcoming defenders – reaching out to get a tip on the ball, which bounced over the goal line and in.

“We saw they were sending three up high and when they sent three up high we knew we couldn’t pass left or right cause they were picking them all off,” Toner said. “So we tried to just release the ball a little quicker and then Erin’s just got such a great touch on the ball and Julia has a nice hit so we just went out of our way to try to just do the simple, not do anything too fancy.”

Wissahickon had an opportunity to score on the second of its two second-quarter corners – Brynne Miller sending a ball across the front of the cage but no one could get a stick on it and the ball rolled wide right.

Drabick, a Temple commit, made a charge down the left side just before halftime but her ball towards the cage was knocked away and out of the circle by South goalie Gwen DiPrinzio.

“We tried to pressure the ball as high as we could,” Toner said. “If we lost possession of the ball, I had told them I wanted them to try to pressure immediately and at least influence what was going on but that didn’t occur. We sort of didn’t do that. But I think the game became like big hits and so then they got tired.”

The Trojans earned four penalty corners in the third quarter, with the best chance to tie coming on their first – Drabick driving then sliding a ball through DiPrinzio’s pads but the Trojans could not knock it in from close range.

“Their defense set up like a wall right in front of – well they would move from the circle and then down,” Gil said. “So the second half we were trying to go around that wall and it worked. We got through on the right a few times and then just nobody could pop it in.”