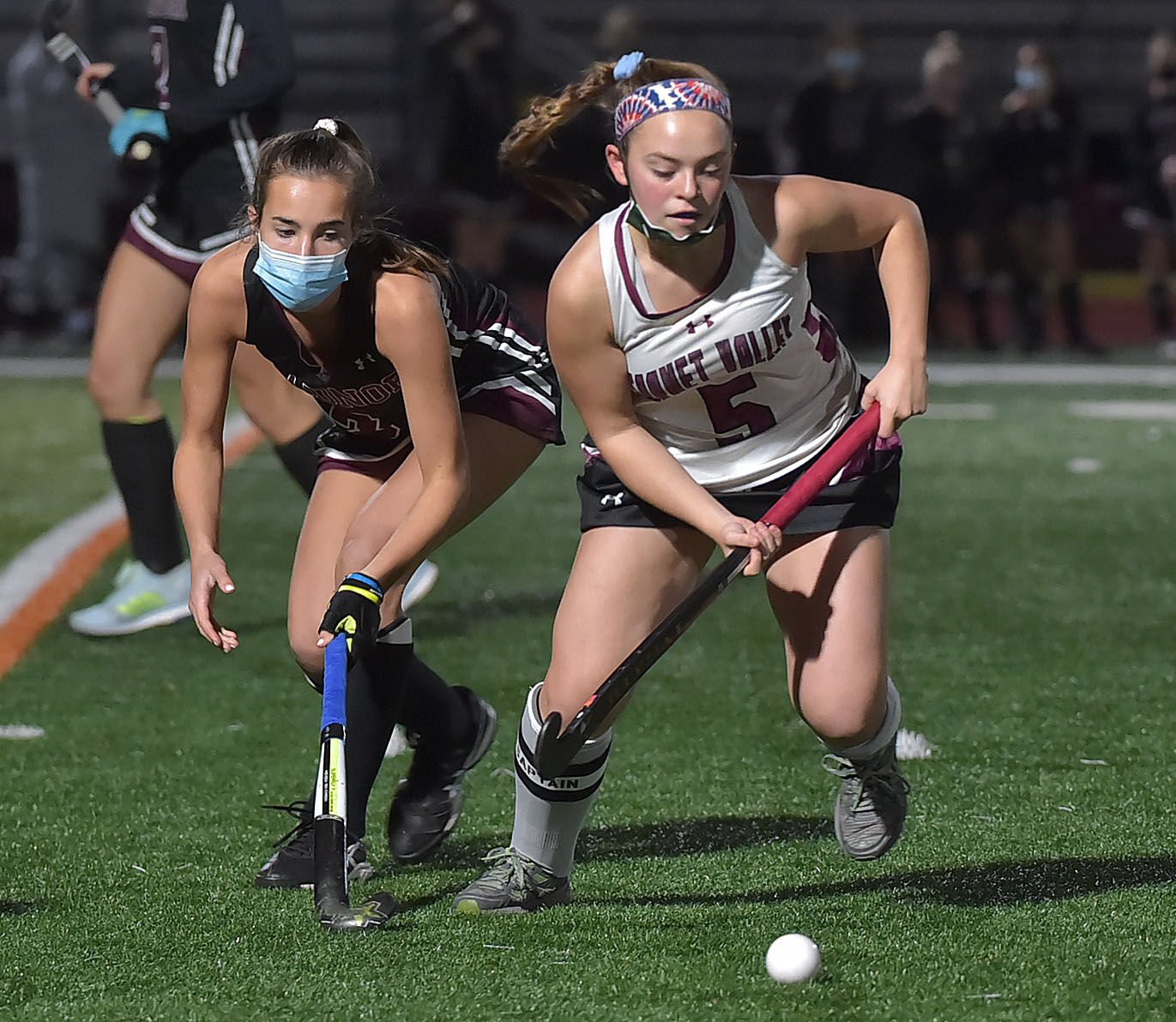 CONCORD — The feeling on the field, from the chill in the air to the temperature of the competition, felt familiar Wednesday. Even if the calendar didn’t say it was a playoff game, the intensity between Garnet Valley and Radnor made it feel like one.

This week one year ago, the Jaguars were making a long-awaited trip to the state tournament. Radnor had just wrapped up a 16-win season, dented by an unceremonious exit from playbacks of districts. For both, playing into November has become an annual objective.

Garnet Valley’s Tina Rawa fires a shot that goes for a goal, giving the Jaguars a 3-1 lead over Radnor at the time Wednesday night. (Pete Bannan/MediaNews Group)

In 2020, though circumstances have conspired to make November field hockey arrive on much different terms, the result between the lines looked similar.

“It’s different, but I’m just glad we have a season, honestly,” Garnet Valley senior Mary Rose Berry said, after a 6-2 win over Radnor. “We have good competition throughout the Central League, too. So we just play every game like we’re going to play in states or districts.”

While the Central League continues its round robin of a season, other areas of District 1 that were quicker to return for the fall are contesting the district playoffs. Those teams have a chance to advance to a shrunken state playoffs, which Garnet Valley earned passage to last year as District 1’s fifth seed in Class 4A.

The COVID-19-condensed schedule has made that an impossibility this year. But when nights like Wednesday’s tilt between traditional league powers takes on the intensity it did, there is a sense that not much is being missed.

“It feels like we’re in the playoffs right now because it was a really tough game,” Radnor midfielder Hope Delaney said.

The teams put together an entertaining game from the start. Garnet Valley had the better of play, earning 16 penalty corners and generating chances aplenty. They scored on five of them, including two first-quarter goals by sophomore Alyssa Smith. Both times, she was alert on the doorstep to clean up rebounds, the first off a scramble, the second when a Tina Rawa shot dinged of the left post and fell to Smith manning the right stick.

Berry scored a similar goal in the third quarter, a shot from the run of play deflected by Radnor goalie Meghan Dole off the crossbar. Berry was waiting, batting the carom into the net from knee height before it hit the ground.

“Usually I’m supposed to play the post on the left side,” Berry said. “We’ve been practicing a lot and when it went in the air, I just saw it and it was right in front of me and I had to hit it in so the defenders wouldn’t knock it out.”

The Jaguars had plenty of plays to draw up for corners. They took a 3-1 lead at halftime via the direct route, Rawa receiving the feed from Theresa Ricci and firing a shot home through traffic. When Rawa’s take was deflected in the third quarter, Ricci picked up the loose ball and nudged it to Sophie Easter to finish. And with two minutes to play, Easter was the beneficiary when Berry’s take was kicked away by goalie Rory Harper, Eastern swiping the goal home through traffic.

Despite getting a goal back via Delaney in the first quarter, the onslaught of Jaguars corners was a tide Radnor couldn’t stem for long.

“I think we’re usually really good at defending our corners,” Delaney said. “I think we really work as a team and communicate about where we should be. We’re usually a second-half team, I would say, so we need to start coming out stronger, which I think we were pretty good at before this game.”

Delaney’s goal might have been the prettiest of the bunch, the midfielder receiving the corner feed from Cierra Hopson, turning to the backhand and reverse sweeping home just inside the far post, a shot perfectly measured for pace and placement. Delaney’s dribbling into the circle forced Radnor’s second goal in the third quarter, penetrating along the end line to the right of the cage and finding Madison Milhous in the area to cajole it over the line off a scramble.

Radnor’s goalies were more active on the night, with Harper (five saves) and Dole (six saves) in constant action. Harper sprawled to make a tremendous double save on Ricci and Berry in the fourth on a quick break.

GV starter Megan Finnegan’s lone save was a kick denial of Delaney, sniffing out an attempted replication of her first goal on a reverse sweep. Maura Greek made one save.

It wasn’t a playoff win as the Jaguars have had in the past. But given the level of competition, Berry and her teammates left the field with a similar sense of satisfaction.

“We just all play for each other,” Berry said. “We all really want to be undefeated. We set our own goals individually and as a team, and one of our goals was being undefeated and the other goal was to be Central League champs, so we look for that and that’s our goal for the season.”

Strath Haven 4, Springfield 0 >> Milly Pelligrini and Maggie Kirby scored in the first quarter to send the Panthers on their way to a victory. Sophia Green and Jazmeen Harper added goals for Haven.

In the Catholic Academies League: