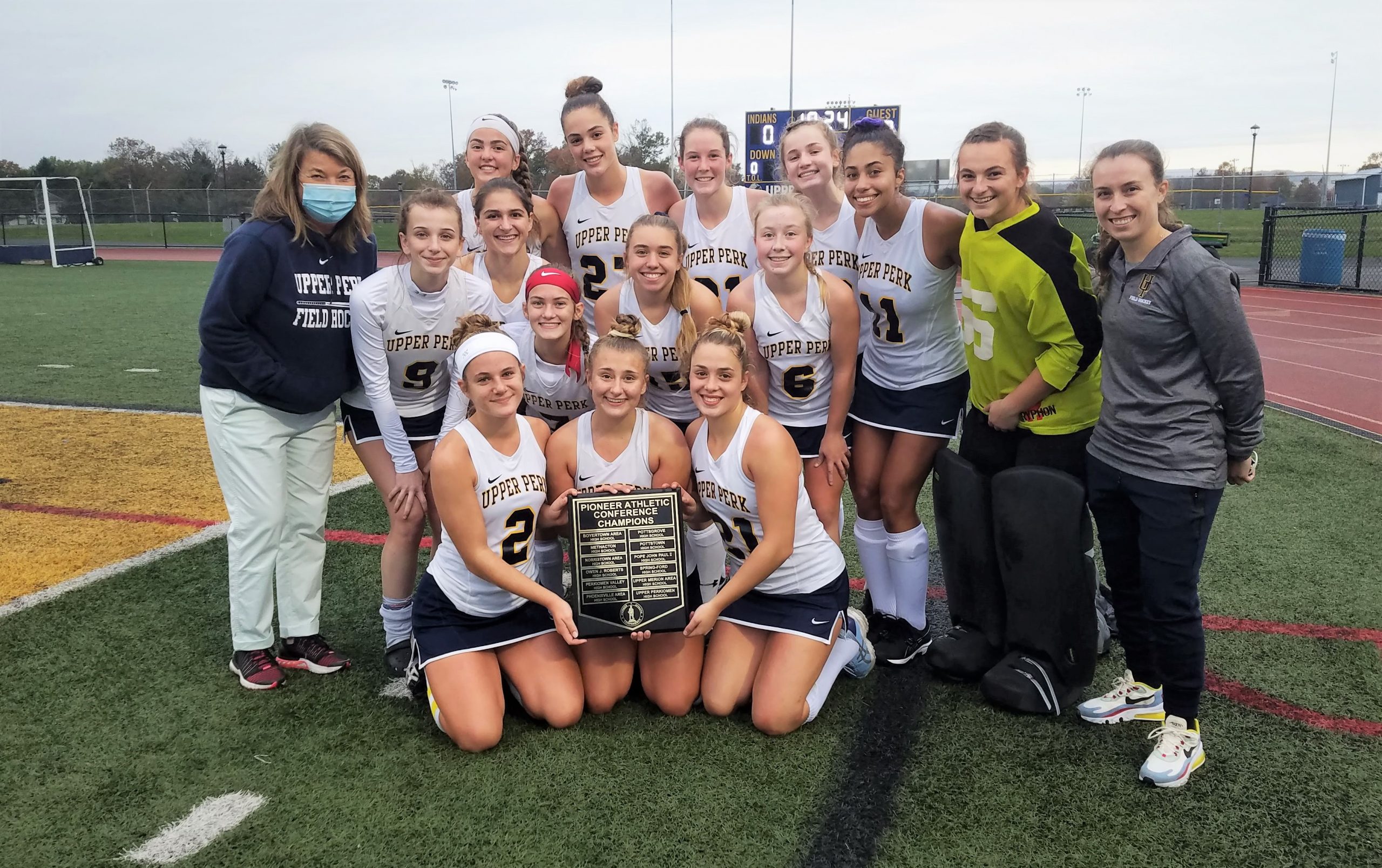 PENNSBURG >> There’s an underdog mentality that prevails in most sports programs at Upper Perkiomen.

It can come naturally as one of the smaller schools in the Pioneer Athletic Conference, especially during this COVID-19 pandemic-altered fall season that had the Upper Perk teams competing in a league with five Liberty Division schools and Pottsgrove.

But that mentality isn’t for the Upper Perkiomen field hockey program. There’s nothing ‘underdog’ about what it accomplished Wednesday.

Upper Perk got goals from Ashlyn Gatto and Sarah Steinman and held off a late barrage from Owen J. Roberts to prevail 2-1 in its regular season finale to capture the outright Pioneer Athletic Conference championship, its second straight league title.

“It feels amazing,” said senior Colleen Creneti. “Last year we felt like the hard work finally paid off and again this year it’s paid off, especially with all the other things happening outside in the world. It feels really good to come together and win. I never thought that we were going to have a season to begin with so to be here it feels so crazy.”

The Tribe became back-to-back champions – a feat they previously accomplished in 2005 and 2006 – by going 9-1-2 through the best competition the PAC had to offer, including a pair of 2019 PIAA tournament qualifiers, Wednesday’s opponent OJR and Perkiomen Valley, and Methacton.

“I knew we were going to go against the bigger schools, which I was very excited about. I would love it to stay this way.”

Upper Perk struck first at the 8:15 mark of the first quarter when junior Gatto received a centering entry pass following an interception and quickly fired low past OJR goalie Reilley Hagarty (2 saves). The Wildcats answered back with a corner that led to a shot by Raina Smolij that was saved by UP goalie Lynnsi Joyce but Amanda Turner was there to score the rebound with 10:14 remaining to halftime.

“At the end of the first half we told them, ‘This is what you want. This is your opportunity to win the championship. Now we need you to play a little more aggressive,’” said Warren. “We were a little sluggish in the first half and I think we played a much better second half and were able to keep it on our stronger side and that helped us.”

The Tribe found traction down the right side with Kylene Gooch playing a key role in building the attack beside everpresent midfielders Bella Carpenter and Takoda Wells and earned a series of corners late in the third quarter. On the fourth successive corner, Creneti inserted to Carpenter who struck a shot that was deflected by Smolij and caromed to the far post where Steinman waited to bury the eventual game-winner with just over three minutes left in the third quarter.

It was anything but a waltz to the finish line though.

OJR applied major pressure in the final five minutes of the match, with four corners and five shots that required the best from Joyce.

“I was praying so hard. Not this one. Keep it out,” said senior defender Summer Spence. “We have a really good defense and I just knew we could keep it out and come through.”

In fact, Owen J. Roberts appeared to have scored the game-tying goal with 47.5 seconds on the clock when Lilly Gariti hit the cage from close range after a corner but the referee judged the ball hit her foot, a fact unknown to nearly everyone in the grounds for a few seconds.

“From my angle, I thought it was a goal,” said UP’s Creneti. “So when (the referee) said it wasn’t, I was shocked trying to figure out what was going on. When she said it wasn’t a goal, all the relief just passed through me.”

The finish had an element of chaos that was felt on both sides.

“It’s hard when you’re in the middle of the play and not knowing what’s going on,” said OJR senior Smolij. “You’re hearing from the bench and they’re yelling one thing, you see another thing, the ref sees another thing, people in the stands yelling, it’s hard to know what happened. I think we did what we could and played our hearts out at the end.”

Drive To Districts >> Both Upper Perkiomen and Owen J. Roberts are bound for the District 1 playoffs, which begin Monday, Nov. 2.

Upper Perk is currently the No. 2 ranked team in Class 2A and would be in line for at least two home games. The No. 7 ranked team is presently Bishop Shanahan (3-2-1).

Regardless of who they line up against, Warren believes the Tribe are as well prepared for the postseason as they’ve been.

“I welcome this,” she said of going through the PAC slate of this year. “This is probably the best competition we’ve had being prepared going into districts.”

OJR sits at No. 14 for the 16-team field and would be in line for a visit to the No. 3 seed, which was reigning District 1 champion Downingtown West at the time of publish.

Senior captain Smolij said the Wildcats are ready for whatever comes their way.

“All we can do is work really hard at practice and do what we can and not get concerned with what seed we’re playing, just be ready to play no matter what team we play. I think it we play the way we did today we’ll be OK. We hustled and worked really hard.”